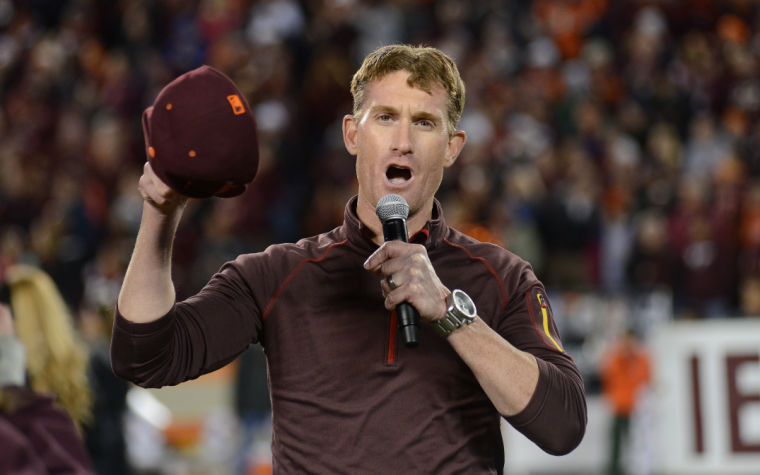 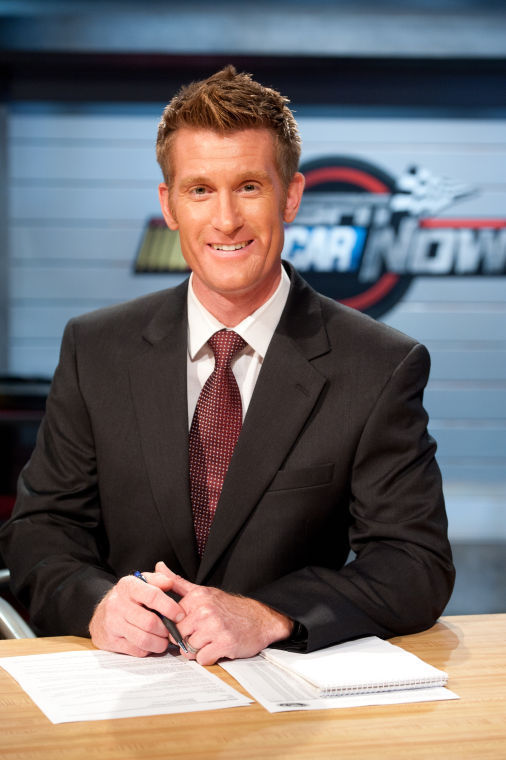 BLACKSBURG — NASCAR reporter Marty Smith doesn’t usually talk about himself on ESPN, but he got personal with the crowd at Lane Stadium on Thursday night.

So the Virginia Tech athletic department invited Smith to speak to the crowd before the Hokies’ football game against Miami. He decided to tell the fans about his late father.

Smith wrote and recorded a pregame essay of about a minute in length that was played on the Lane Stadium video board, with photos accompanying Smith’s words. He talked in the essay about how, when he was a boy, his father used to buy tickets from a scalper and take him to games at Lane. Smith also said in the essay that he considers Tech football to be the identity of the entire region.

He then walked to the middle of the field and spoke live, off the cuff, for about 20 seconds to conclude his speech. He told the crowd that he lost a little piece of himself when his father died and that the only place he regains that piece is when he visits Lane Stadium.

“It was one of the most unique feelings I’ve ever had, to hear those people appreciate the message,” Smith said in an interview at the stadium later that night. “They don’t know my dad. But I think maybe that message is pervasive.”

Leo Smith was a Virginia Tech graduate who died in 2008.

“I’ve been coming here since I was 5 years old,” Smith, 38, said in the interview. “That was [the] bond between my daddy and me. Coming here as a kid and seeing those players play — Maurice DeShazo and Jock Jones and Vaughn Hebron and Will Furrer and all those people … really taught me to dream.

“You have that thing with your parent that really links you, and it’s that common bond. … This was it for my father and me. He just loved Virginia Tech football.”

Smith said his father was “a hard dude to know.”

“He wasn’t a big ‘I love you’ dad, and some of my favorite memories are here [at Lane],” said Smith, who now lives in Charlotte, North Carolina. “I link these games to the ride back down [U.S.] 460 West to Pearisburg in my dad’s truck.”

After Smith’s mother died of cancer in 1998, Smith’s father became depressed until he died 10 years later. But father and son could still talk about the Hokies.

“I would call home, and he wouldn’t be receptive to the call because he was so depressed. But on Saturday morning, he knew why I was calling and we would break down whoever the opponent was that day and what we thought might happen,” Smith said. “Those calls were really special to me.

“When he died, … that next fall, I remember wanting to dial the phone on Saturday mornings at whatever racetrack I was going to [and call him].”

Smith, a Hokies fan, brought his wife and three children to Thursday’s game. It was the first time his son, Cambron, 8, attended a Tech game.

“He thought it was the coolest thing ever,” Smith said.

Smith has worked for ESPN since November 2006. He reports on NASCAR for ESPN’s “SportsCenter” (as he did on Friday) and contributes features to ESPN’s pre-race show, “NASCAR Countdown.” He also used to report for “NASCAR Now,” but that nightly show on ESPN2 was canceled earlier this year.

ESPN is losing its rights to televise Sprint Cup races after this season, so it won’t have a pre-race show next year. But Smith will be staying with ESPN in a new role. ESPN announced Wednesday that it had signed Smith to a new contract.

Smith will continue to report on NASCAR for “SportsCenter,” but he will also cover NFL, NBA and college football and basketball teams in the Southeast for the nightly program.

“How cool is that?” Smith said. “To get to meet so many new people will be fun.”

He will also do essays for “SportsCenter.” He will be based out of ESPN’s Charlotte bureau. Next Wednesday, he will cover the home opener of the NBA’s Charlotte Hornets.

Smith played football, basketball and baseball for Giles, helping the high school win a state football title in 1993. So he is excited about his new assignments.

“I’m thrilled by the prospect of that diversity. I’ve been a stick and ball fan my whole life,” said Smith, whose new contract runs through 2017. “And I’m still going to be the NASCAR guy, too. If there’s a NASCAR story to be covered, it’s my story.”