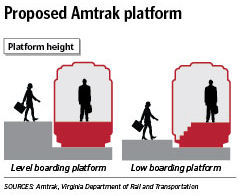 Federal regulators are calling for the new train boarding platform downtown to be level with the train to accommodate disabled riders, but the project team says the available space won't allow it.

Amtrak specifies the new boarding location downtown would need to be 850 feet long to accommodate an eight-car train.

Federal regulators are calling for the new train boarding platform downtown to be level with the train to accommodate disabled riders, but the project team says the available space won't allow it.

Amtrak specifies the new boarding location downtown would need to be 850 feet long to accommodate an eight-car train.

A dispute over the boarding platform has slowed down the planned resumption of passenger rail service in Roanoke after 35 years.

The issue is how to accommodate passengers with disabilities and whether there is enough space for the level-boarding platform required, with some exceptions, at new Amtrak stations by a recently updated federal regulation.

Residents were told in 2014 that Amtrak was coming in three years, but the platform issue could delay the planned spring 2017 launch by several months, according to government records. Some fear a major setback — or, worse, a halt to the project — if the matter isn’t quickly resolved.

Riders will catch the train in downtown. The site picked out for the platform is a sliver of land bounded by Norfolk Southern Corp. freight traffic, Norfolk Avenue and two large buildings.

On Sept. 30, the Federal Railroad Administration told the project team that federal officials believe a raised platform that would permit level boarding, without the need for wheelchair lifts, is required by the Americans with Disabilities Act. The project team includes Amtrak, Norfolk Southern and the state Department of Rail and Public Transportation. The state has budgeted nearly $100 million for the project, about 10 percent of it for the platform and a related train servicing facility.

Jennifer Mitchell, who directs the department, said Oct. 21 the state prefers raised platforms and the level boarding they offer.

But in Roanoke, “the site just won’t allow it,” she said.

The project team wants to build a low platform consisting of a concrete or asphalt slab near ground level. Riders would use a portable mechanical lift on the platform or stairs inside the car to board.

A raised platform, which many of the players agree is superior, would stand 4 feet high. It would be level with the train’s floor and place passengers at the car door. But with ramps required to access it, a raised platform requires more space than a low platform.

Citing the space issue, and possibly other issues, the project team is seeking a waiver of the level-boarding rule. With a waiver, a low platform equipped with lifts complies with the ADA.

Most Amtrak stations in Virginia — including the last new one, Norfolk, and the closest, in Lynchburg — have low boarding platforms. But they were built before the implementation of a federal rule designed to increase train accessibility. The rule says Amtrak stations built or substantially renovated after February 2012 must offer level boarding unless the track passing through the station carries “existing freight operations.” Roanoke would be the first new station in Virginia covered by the regulation.

Because they are wider than passenger trains, freight trains would bump a raised platform. That’s why an exception to the level boarding requirement applies when freight trains share the track where Amtrak boards passengers, and a low platform just 8 inches taller than the tracks is acceptable.

In late August, Amtrak, on behalf of the state, told regulators that Roanoke qualified for a waiver, saying freight traffic “exists directly adjacent to the platform” planned along Norfolk Avenue.

The request seemed to be based on a plan to install about 1,700 feet of track specifically for Amtrak service next to Norfolk Southern’s existing freight lines next year. The platform, to be built next, would sit beside it. Norfolk Southern has said the railroad intends to run freight trains over the platform track except when a passenger train is at the platform.

But the federal rail agency didn’t appear to buy the argument.

“We find that this is new construction of a platform track that diverges from the freight main,” the federal railroad agency said Sept. 30 in a position statement that remains unchanged. “Under these circumstances a level boarding platform is required.”

Waves of upset washed over the project team, according to correspondence released by the state.

“Just when we thought we had gotten over the obstacles this comes down the pike!” John Friedmann, Norfolk Southern’s vice president of strategic planning, wrote to Mitchell. Friedmann volunteered to help change the agency’s thinking and explain the railroad’s desire to use the new track. “I’d hate to have to redesign this whole thing and start over just because of the FRA’s whims,” he said.

Nearly two years ago, Friedmann agreed with Virginia that the railroad would provide track capacity for one daily, round-trip passenger train between Lynchburg and Roanoke. The railroad agreed to build the needed infrastructure, and to stay within a state budget of nearly $100 million or pay for cost overruns. If it drops out of the project, the railroad would have to repay any public dollars spent to date. However, the railroad has an incentive to complete the project because the improvements will also benefit freight transport.

William Fralin, a former state lawmaker and current Commonwealth Transportation Board member, emailed team members. “We need to get this to a higher level at FRA via the Governor or one of our Senators,” Fralin wrote. “Once this decision becomes public, it is possible that the bureaucrats will become more intransigent.”

In an interview, Fralin explained his statement.

In the wake of the decision, the project team has strived to defend its original proposal, focusing in part on what it sees as a problem of space.

Amtrak specifies a minimum platform length of 850 feet to match the train, which a city official said will be eight cars long. A platform that size would stretch from Warehouse Row to the Wells Fargo Tower.

The planned width is about 15 feet. Engineers think a low platform might just fit in the space between the planned platform track and Norfolk Avenue.

However, if the platform is raised, wheelchair ramps would increase its width by about 7 feet, and the platform infrastructure would overlap part of Norfolk Avenue, according to an engineering report requested by the city. Cutting Norfolk Avenue to one lane and making it one-way could block access to the parking garage and loading docks at the Wells Fargo building, and could compromise vehicle access to Warehouse Row’s back side via a city alley, the report said

It would displace hundreds of feet of the Rail Walk and cover the lowest 5 feet of the southern stone pier supporting the Dr. Martin Luther King Jr. pedestrian bridge, the engineering firm said.

City Manager Chris Morrill said the city played no role interacting with the federal rail agency. “For us, it’s all about getting the train here as quickly as possible and making sure it’s accessible for people with physical challenges,” Morrill said.

Another issue is the railroad’s intention to use the platform track. Mitchell, head of the state rail agency, said the railroad has a right to use any improvements on its property.

The railroad operates 50 to 60 trains through downtown Roanoke daily, making it a major corridor. The state paid about $10 million for a massive upgrade of the tracks starting in summer 2012, with the railroad paying another $7 million. The railroad declared that project a success, stating in an in-house publication that more freight now moves faster and safer. Still, the railroad has said it intends to use the new platform track for freight.

The railroad declined to discuss the track issue. “Norfolk Southern is currently working with the other project stakeholders to review the platform design and the FRA response,” railroad spokeswoman Susan Terpay said by email.

The federal railroad agency also declined to comment. However, agency officials have agreed to visit Roanoke, according to a spokesman who asked to not be identified. The agency will work with all parties on the matter, he said.

In the end, if a low platform is built, that “doesn’t rule out level boarding in the future,” Amtrak spokeswoman Kimberly Woods said in August. However, Mitchell said the state has no plan to add level boarding later.

One option might be a platform that combines both a raised surface for level boarding and a low platform, state rail department spokeswoman Bethany Wolfe said.

Jeremy Latimer, the state’s rail transportation programs administrator, is worried about a delay. About a week after regulators turned down the low-platform proposal, Latimer told a colleague to edit a start date of May 2017 for Roanoke’s Amtrak service out of a scheduling document and use the more vague 2017 instead.

“With this platform issue, May 2017 is too aggressive,” he said.