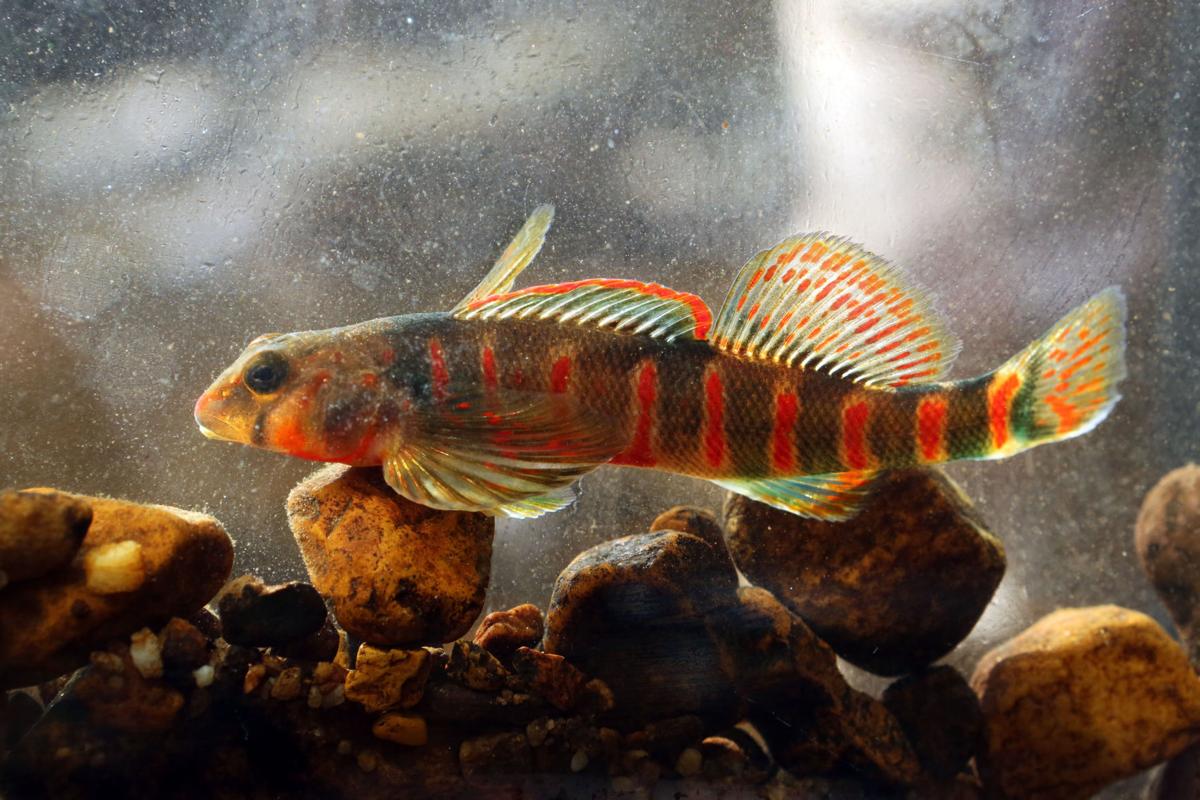 Virginia Tech graduate student Katie McBaine describes the candy darter as “North America’s most beautiful fish.” The candy darter is found in only four streams in Virginia, all of which flow into the New River. 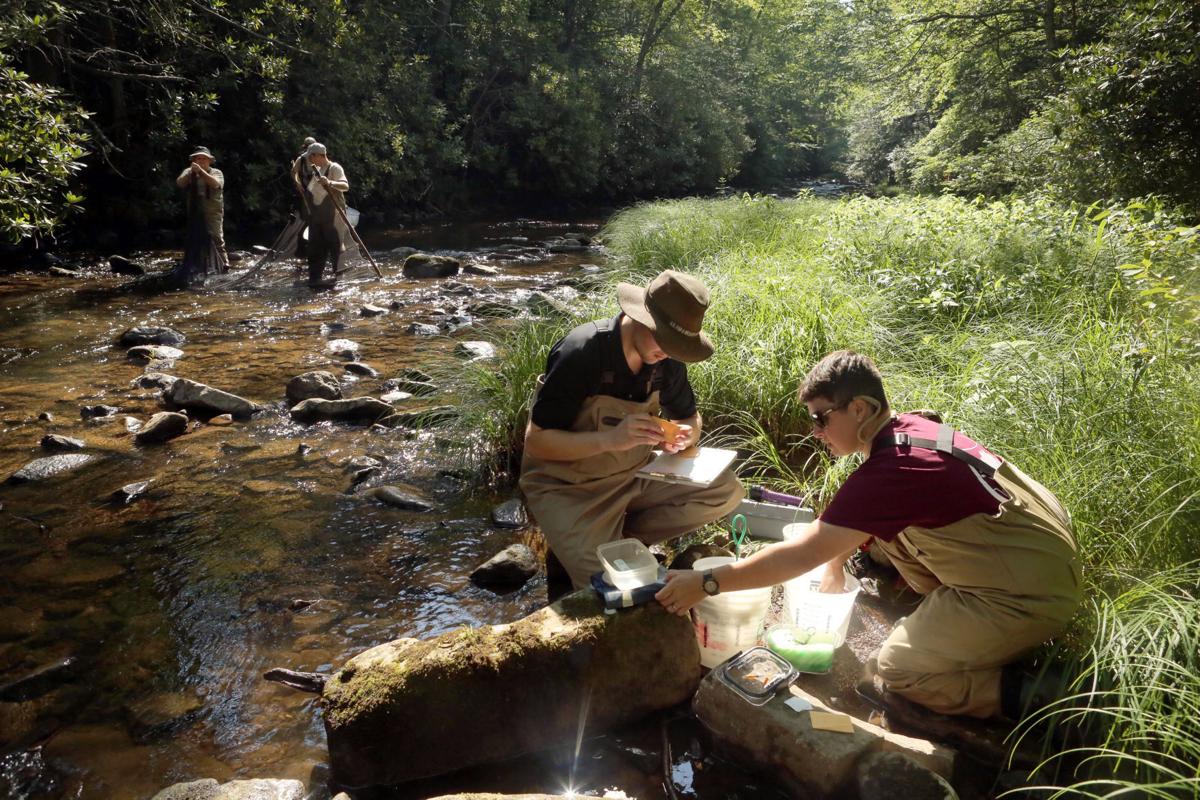 A team of researchers from Virginia Tech, the Virginia Department of Game and Inland Fisheries and the U.S. Fish and Wildlife Service collect darters in Giles County.

Virginia Tech graduate student Katie McBaine describes the candy darter as “North America’s most beautiful fish.” The candy darter is found in only four streams in Virginia, all of which flow into the New River.

A team of researchers from Virginia Tech, the Virginia Department of Game and Inland Fisheries and the U.S. Fish and Wildlife Service collect darters in Giles County.

INTERIOR — Under the rocks of Big Stony Creek a team of Virginia biologists are searching for candy.

The team — including scientists from Virginia Tech, the Virginia Department of Game and Inland Fisheries and the U.S. Fish and Wildlife Service — combed the creek last week for a rare capture of what Virginia Tech graduate student Katie McBaine described as “North America’s most beautiful fish.”

When one ends up in their net as they search the rocks and use electrofishing to capture the fish, the otherwise reserved biologists can barely contain their excitement.

“Candy darter!” They shout to alert McBaine, who is taking some basic measurements of the fish that were already captured.

The candy darter is a rare fish that’s currently under review for federal listing as an endangered species. Its continued presence in mountain streams could have implications on the Mountain Valley Pipeline project and understanding the health of the Appalachian ecosystem.

It’s one of eight species of fish endemic only to the New River drainage basin. The darter has been found in only four streams in Virginia, all of which flow into the New River. It is also found in several streams in West Virginia that are part of the New and Kanawha River basins.

Virginia Tech’s McBaine is studying the fish by measuring its population, genetics and hardiness to determine the overall species health.

Last week, McBaine and the other biologists found the fish as part of a series of studies conducted by local and federal agencies with Tech over the past two decades. She’s doing a series of re-captures to measure species movement, sequencing their DNA to determine genetic diversity and trying to get enough data to estimate a population size in Virginia.

According to Mike Pinder, a VDGIF aquatic life biologist who has studied the darter since the mid-90s, very little is still known about the fish. He wouldn’t even hazard a guess as to how many live in the wild, though he said they hoped McBaine’s study could produce an accurate estimate.

The candy darter is the ideal species to study for graduate school work, McBaine said on the banks of Big Stony Creek, which runs through Giles County before emptying into the New River near Ripplemead.

“I couldn’t believe it was a freshwater fish,” McBaine said. “It’s just so beautiful. When I saw it I knew I wanted to be part of the management and conservation of this species.”

McBaine’s research, along with several other studies from scientists in Virginia and West Virginia, has already influenced species conservation, said Jordan Richard, a biologist with the U.S. wildlife service.

The candy darter is currently under review for protection under the federal endangered species act. That came after a review of the species’ status was put in motion last fall.

Richard used information gleaned from McBaine’s ongoing study as well as similar work from other biologists — featuring several studies from West Virginia University — to submit a species assessment to higher ups in the federal government.

They’ve been reviewing that work for some time now and will come out with a ruling on the candy darter’s protection status next month.

The candy darter is listed as a “species of concern” by VDGIF and the West Virginia Department of Natural Resources.

Richard said the review would alter how the species is protected.

Contractors planning construction near creeks like Big Stony would need to take special care not to damage the candy darter’s habitat.

Instead, it’s more likely agencies such as the Virginia Department of Transportation would have to take special care not to damage the streams and to avoid construction during certain parts of the year. The candy darter spawns during late spring and early summer.

The proposed Mountain Valley Pipeline is one project whose construction practices and environmental monitoring might be affected by concerns about the candy darter.

The 42-inch diameter steel pipeline, which would transport natural gas at high pressure, would be buried in a trench ranging in depth from about 5.5 feet to 9 feet, depending on terrain. The construction right-of-way would be 125-feet wide in most places, a swath that will be cleared of all vegetation.

The route would cross steep slopes and pass through areas prone to landslides and through soils susceptible to erosion, raising concerns among biologists that sediment would be deposited in streams providing habitat for sensitive species.

The Federal Energy Regulatory Commission took the candy darter’s presence into account in Big Stony Creek in its final environmental impact statement on the Mountain Valley Pipeline published in June. The agency found that the project was “not likely to contribute to a trend toward federal listing.”

VDGIF is monitoring the pipeline project as it continues and is “concerned” for the candy darter, Pinder said. A federally endangered species already in the pipeline’s path has not stopped the project so far.

The Roanoke Log Perch — found only in the Roanoke River basin — lives in part of that river that’s in the pipeline’s path. The FERC report found that the project is “likely to adversely affect” that fish species.

McBaine’s study would likely influence VDGIF’s recommendations for protecting the species to authorities building the pipeline.

Beyond careful study before construction projects, the status could also open it up to federal grants for stream bank restoration, further research for management plans and eventually maybe even re-introduction to streams where they haven’t been found recently but were found in the past, Pinder said.

It’s habitat in Virginia has shrunk due to streams facing challenges from increased sedimentation and agricultural pollution. It was once found in six more streams than it’s found in now, McBaine said.

If something heavily damaging to fish — like the 165-gallon chemical spill last month in Tinker Creek that killed more than 40,000 fish as much as 8 miles downstream from the spill — it could wipe out a significant proportion of the darter’s population.

In West Virginia, the candy darter is also facing a threat of hybridization from a closely related fish species, the variegate darter, Richard said.

That fish was introduced to streams in West Virginia and now out-competes candy darter males to breed with candy darter females. Their offspring then take on many of the variegate darter’s attributes. In the streams that flow into the Greenbrier River, the candy darter is becoming exceedingly rare because of this phenomenon, Richard said.

Biologists don’t really have any way to stop hybridization where it’s already started, he said. Right now, variegate darters haven’t been found in Virginia and as long as they stay out, candy darters should fare well.

But it only could take one introduced variegate darter to be introduced to begin the hybridization process, he said.

McBaine is using another study, measuring environmental DNA in water samples to see if the candy darter might be living in several streams in Virginia where it had been discovered before but appears to no longer live. She’s also searching for variegate darters to see if hybridization is likely in the future.

But why should anyone care about the well-being of this five-inch fish that lives under rocks in a handful of Appalachian Mountain streams?

According to Pinder, the fish has an important role to play in the ecosystem of the Appalachians.

The candy darter depends on clean water, and its presence is an indicator of a healthy stream ecosystem, he said. When populations decline or are lost, it could suggest worsening water quality.

In such cases people should be concerned because many animals, including humans, depend on clean water, Pinder said.

But besides those implications, they’re also just a sight to behold, and losing candy darters would be a disservice to eyes taking in the wonders of nature.

“This fish is a jewel,” Pinder said. “Just to see this thing is incredible.”