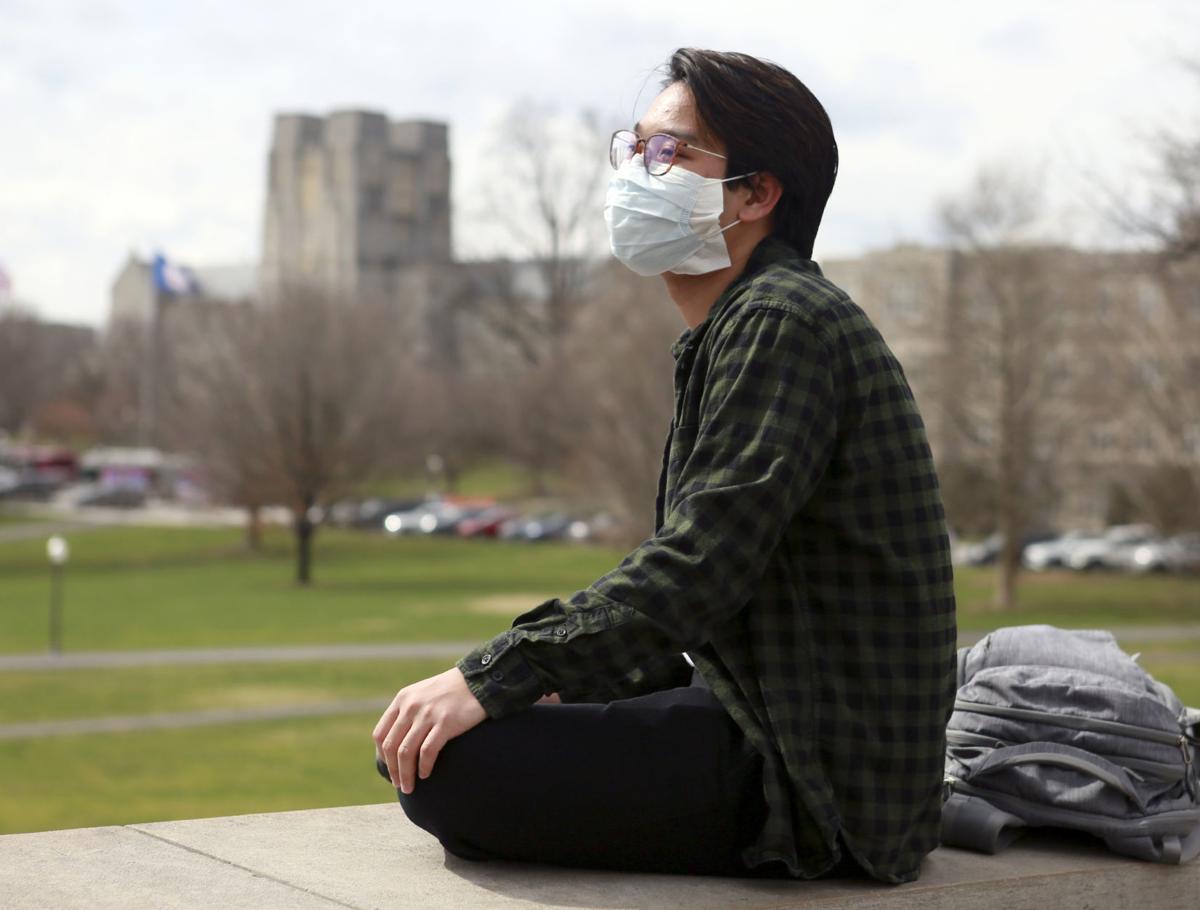 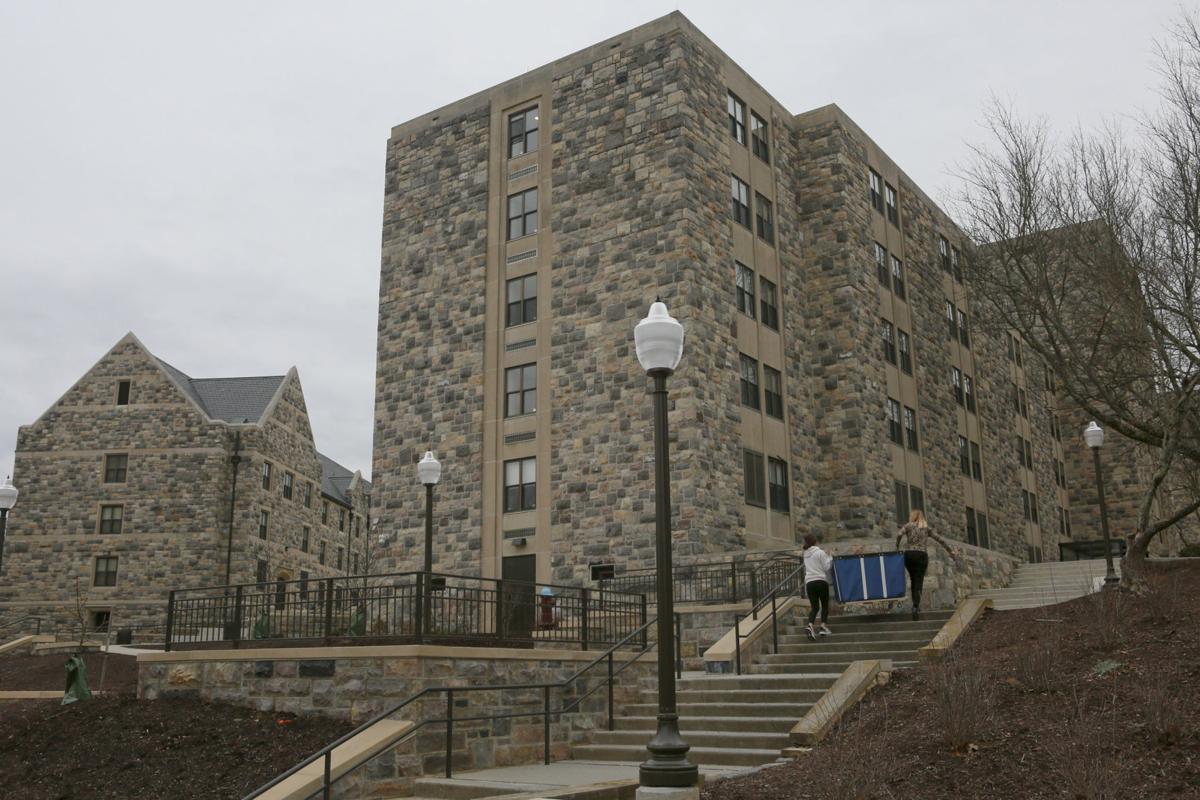 Virginia Tech freshman Sarah Earle and her mother Karen Earle of Harrisonburg move out of her Virginia Tech dorm Monday. The universty said it will conduct the remaining spring semester classes online and sent most students home.

Virginia Tech freshman Sarah Earle and her mother Karen Earle of Harrisonburg move out of her Virginia Tech dorm Monday. The universty said it will conduct the remaining spring semester classes online and sent most students home.

BLACKSBURG — Virginia Tech said Thursday it would move May graduation online as officials try to prevent any outbreak of the new coronavirus on campus.

The university will invite all graduating students to campus for a ceremony and tailgate on Sept. 26 before a football game with the University of North Alabama.

“For many of our students, commencement is arguably their greatest achievement at this point in their lives, and we will recognize and celebrate it,” President Tim Sands said in a statement. “I understand and share their disappointment regarding these unavoidable disruptions. We are experiencing an historic, unprecedented event that requires extraordinary actions. We will do what we must to stop the spread of the virus and protect our community, while honoring our graduates in the most meaningful way we can.”

The announcement comes as Tech officials prepare for the arrival this weekend of a fraction of students from an extended spring break. The university plans to ask some of those students about their recent travels to help contain the spread of the disease COVID-19.

Only about 900 to 1,000 of Tech’s on-campus-housed population of 10,400 students are likely to return to university housing when online classes begin Monday, according to a Tech spokesman. Tech has allowed only students who need to remain on campus to return — such as those who have an immuno-compromised family member at home, or who do not have home internet access.

With the expectation that a positive case of COVID-19 will come to the New River Valley, Tech officials have been working around the clock to prepare the campus.

“It will show up here eventually,” Michael Mulhare, assistant vice president for emergency management, told an audit committee of the university Board of Visitors on Thursday. He spoke hours before Carilion Clinic announced Thursday evening the first positive case of COVID-19 in Southwest Virginia.

“We’re essentially asking the entire community if you’ve returned to Virginia in the last 14 days, we want you to either, if you’re a student, contact the health center, or if you’re an employee, contact the New River Valley health district. And they have a risk assessment algorithm set up,” Mulhare said. “It’s all about when you’ve traveled, not necessarily where you’ve traveled.”

While Tech doesn’t know how many students living in off-campus housing might return to Blacksburg in coming days, a spokesman said students will be asked their location when they begin to log into online classes.

On campus, the university’s housing office is planning how it will accommodate single occupancy rooms, to ensure social distancing, according to Mulhare.

“There’s been a significant, surprisingly, decrease in the number of students that are coming back to campus. That provides us a lot of options if we need to alter our housing if we need to set up, the medical term is an infirmary, where we have students who may test positive at some point,” Mulhare said. “So we have a lot of flexibility where we can isolate students and can provide the services needed and also minimize the risk of transferring COVID 19.”

The university has been in frequent contact with the Virginia Department of Health and peer state institutions about how to prepare for students returning to campus.

Radford University closed its on-campus housing until at least April 17. The school currently has 2,739 students who live in dorms and 731 who live in university-owned apartments, according to a school spokeswoman.

Tech officials noted that demand for mental health counseling is likely to increase. They’re working out how to transition those services online. And with the cancellation of every major event through at least April 30, university staff are discussing how to implement outdoor activities that can keep students in Blacksburg physically and mentally healthy, while still maintaining social distances.

Sands noted that presidents of state colleges and universities talk about every other day by phone in coordination with the state secretary of education.

“We’re trying to stay ahead,” Sands told board members. “One thing about the other institutions is there are, on a couple of issues, we did get out ahead and there are a couple where we were maybe a day behind the leaders. We’ve kind of gotten into a place now where there’s so much dialogue … that the institutions are generally moving in lockstep.”

Board members asked Tech officials about economic fallout from the new coronavirus. University officials noted that policy actions from the state and federal government — including work-study and financial aid — would shed more light in the near future.

Officials at Tech are also in the midst of coming up with recommendations for any increased tuition and mandatory fees for the following school year.

On Thursday morning, Tech held a public hearing on proposed increases — which range between 0 and 4.9% for in-state tuition and between 2.9 and 3.1% for out-of-state students and graduate students.

State lawmakers have earmarked $80 million for colleges and universities to once again freeze tuition rates, which happened for the first time last year in a decade. Amid the coronavirus pandemic and subsequent economic fallout, the final state budget may look far different than the one approved by the General Assembly just last week.

While six people were signed up to speak at Tech’s public hearing, only one did so.

Steven Warren, a student, told board members that wages have not kept pace with the ballooning cost of higher education, which has especially hurt poorer students.

“The fallout from the coronavirus has aggravated all of these problems,” said Warren, who noted that both his roommates lost their dining hall jobs. “In the wake of such a public health and economic crisis, it would be unconscionable to ask those students and families to scrape together a couple hundred more dollars in order to pay tuition.”

As three members of the board listened attentively to Warren and the presentation on the university’s fiscal situation, they drank coffee and munched on viennoiseries. Each seated a good six feet from the other.

Ferrum College to hold online graduation in May