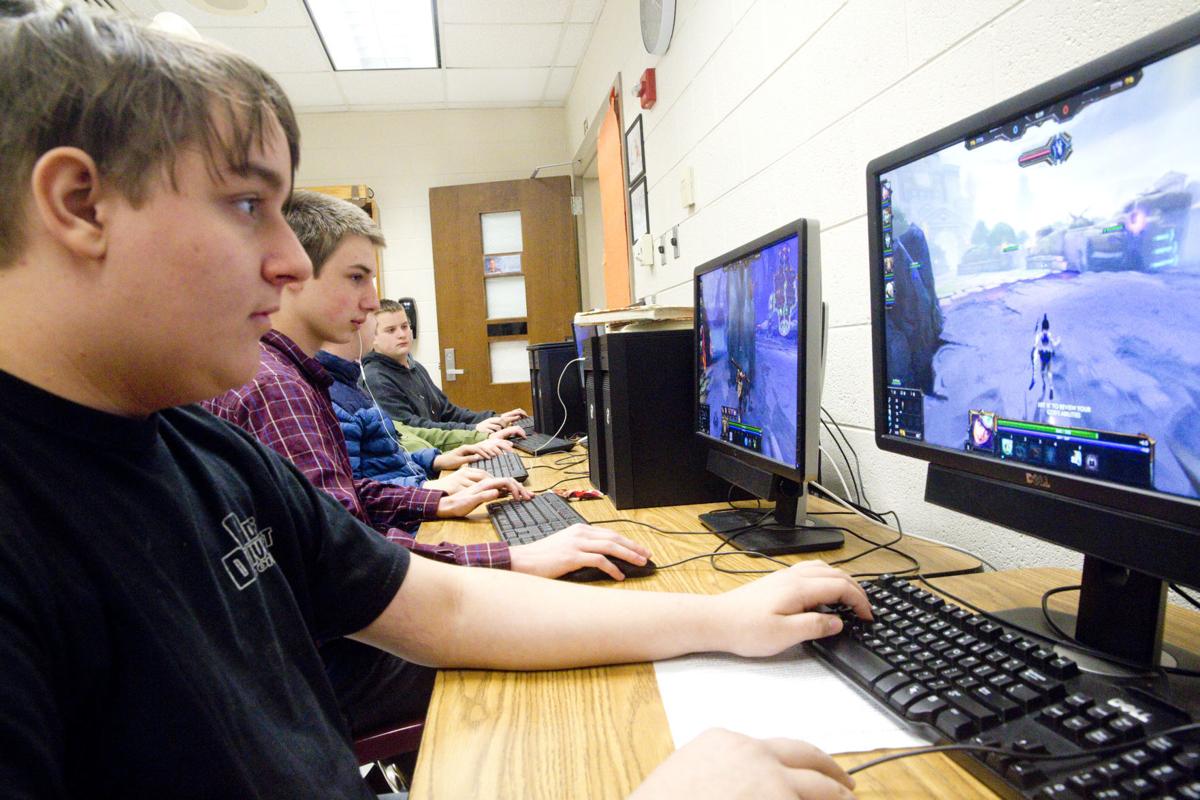 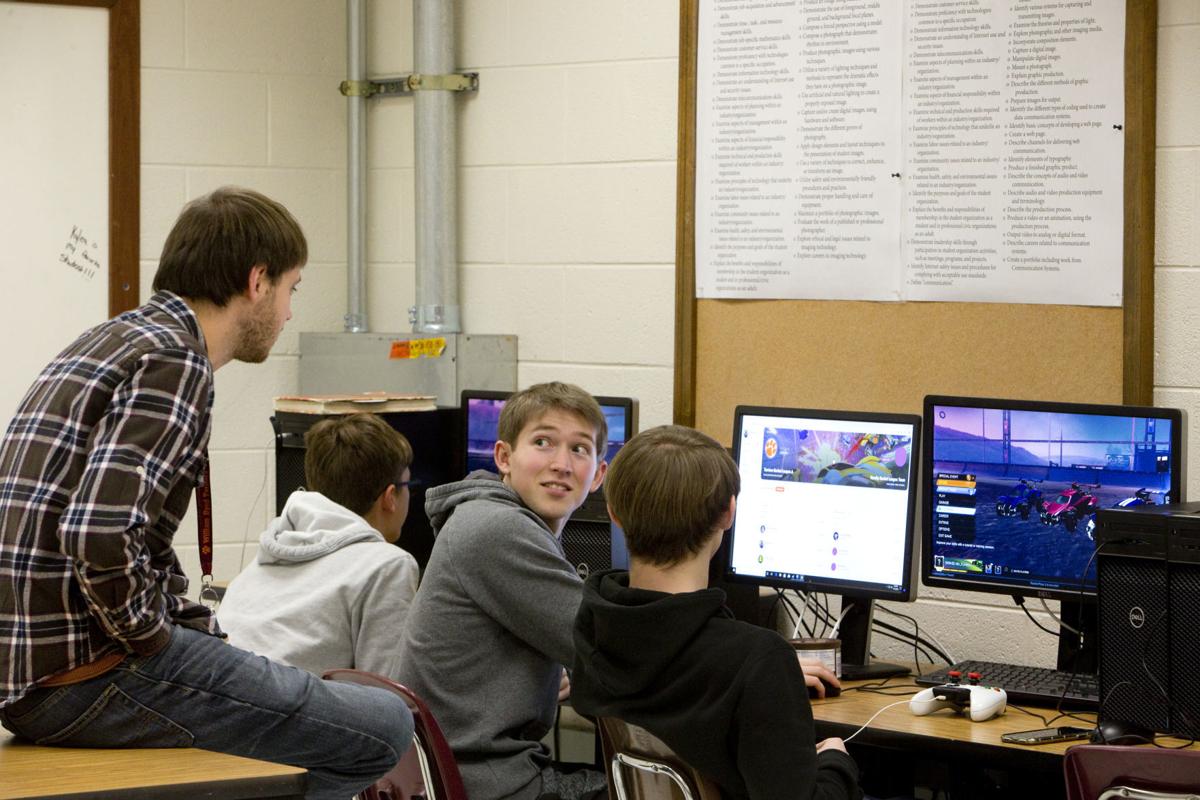 Mitchel Burkhart, (left) an English teacher at William Byrd High School, is the coach for the esports team. Evan Garst, 18, a senior, turns to chat with his coach. Seated to Garst’s left is Griffin Horecek, 15, a sophomore, and to his right is Payton Meadows, 18, a senior. About 25 students participate in William Byrd’s esports team, which is “student-led and student-driven,” according to Burkhart. Students must meet GPA requirements to stay on the team, which has inspired some students to improve their grades. 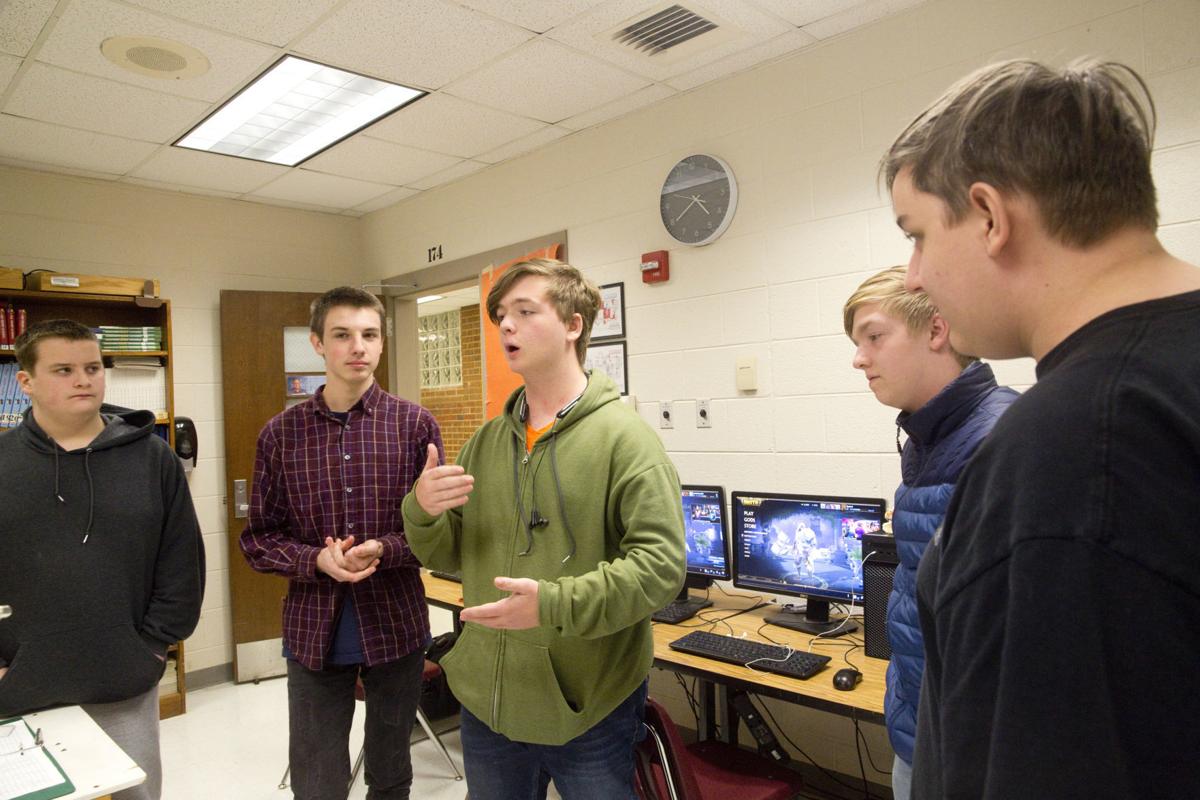 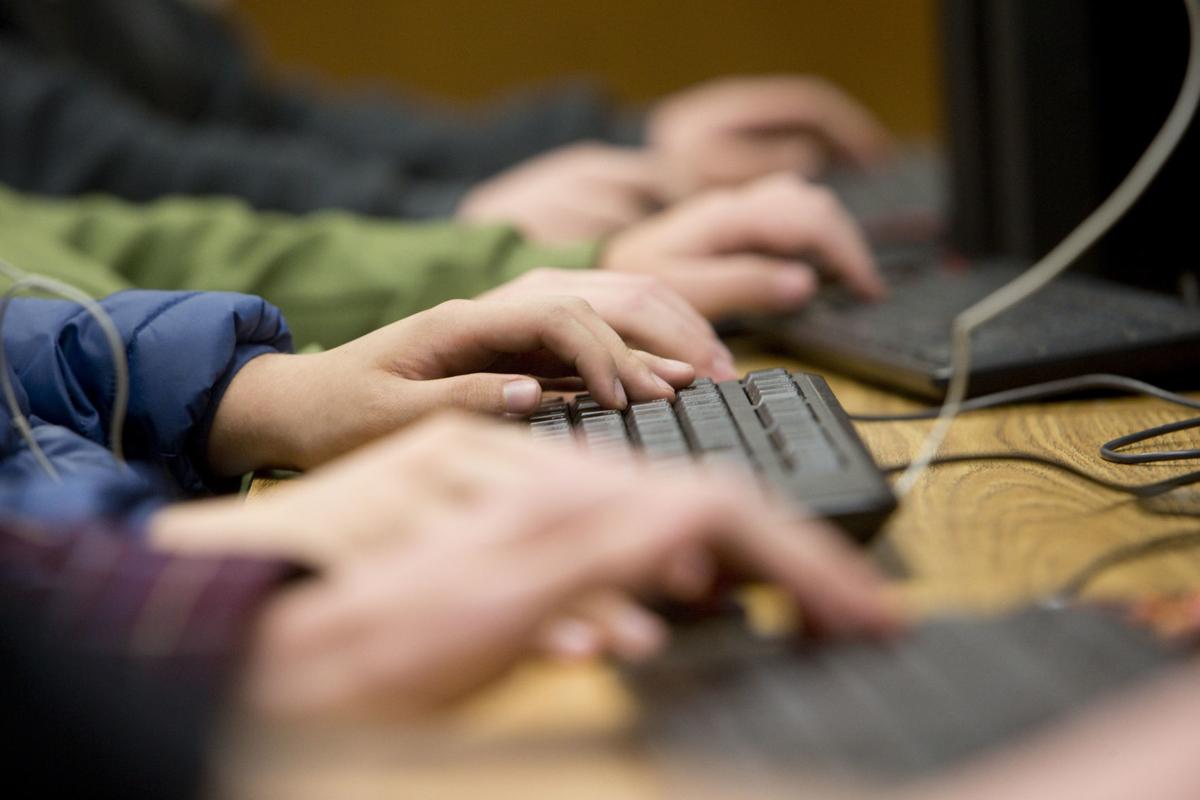 Esports team members say gaming experience and communication are key to success in Virginia’s pilot program for high school students. Students at William Byrd High School in Roanoke County, and Blacksburg, Floyd and Radford high schools in the New River Valley are among the 37 schools participating in the inaugural season, which ends the week of Dec. 16, with playoffs in January.

Mitchel Burkhart, (left) an English teacher at William Byrd High School, is the coach for the esports team. Evan Garst, 18, a senior, turns to chat with his coach. Seated to Garst’s left is Griffin Horecek, 15, a sophomore, and to his right is Payton Meadows, 18, a senior. About 25 students participate in William Byrd’s esports team, which is “student-led and student-driven,” according to Burkhart. Students must meet GPA requirements to stay on the team, which has inspired some students to improve their grades.

Esports team members say gaming experience and communication are key to success in Virginia’s pilot program for high school students. Students at William Byrd High School in Roanoke County, and Blacksburg, Floyd and Radford high schools in the New River Valley are among the 37 schools participating in the inaugural season, which ends the week of Dec. 16, with playoffs in January.

Some controlled rocket-powered cars in a virtual soccer arena. They flipped and soared through the air, striking the ball up field.

“Bang, baby!” said 10th grader Griffin Horacek, after slamming the ball through the back of the net. A bullhorn blast signaled another goal for the William Byrd team.

Across the classroom, students entered a world of mythical creatures. Defeating an opponent requires each squad member to play as gods or goddesses and communicate frequently.

“You need a lot of trust in this game,” 11th grader Hunter Keesee said.

William Byrd launched its first esports team in October amid a surge in popularity across the state and nation. The Virginia High School League approved a one-year pilot program for esports this summer to determine the feasibility of adding it to the list of sanctioned activities. Teams participated in a competitive season during this fall’s semester, and will be able to do so in the spring.

The statewide organization partnered with gaming platform provider PlayVS, which is affiliated with the National Federation of State High School Associations.

Students pay $64 per game title to play in the esports league per season. Game offerings include Rocket League, Smite and League of Legends.

Three New River Valley high schools — Blacksburg, Radford and Floyd County — are among the 37 schools statewide participating in the inaugural season, which ends the week of Dec. 16. Playoffs begin in January.

Law said he was surprised at the level of interest. He recalled an informational meeting the school organized earlier in the year on the esports pilot.

“Over 50 students showed up,” he said. “That was the shock. We didn’t realize that it would be that popular, but it turns out the kids are already playing the sport on their own.

“We knew kids liked video games, but when it came to the competitive nature of esports, we didn’t know what to expect until the kids showed up in mass quantity.”

The interest Floyd County experienced extends to a global scale.

The esports market has been projected to exceed $1 billion in revenue for the first time this year, according to a report released by market analytics company Newzoo. The market also has an audience numbering in the hundreds of millions.

As a sign of esports’ popularity, ESPN and Disney last year inked a multi-year deal to broadcast the Overwatch League.

At Roanoke County’s William Byrd High School, English teacher Mitchel Burkhart coaches about 25 students on the esports team. He supervises after-school practices inside the graphic design lab. Burkhart also coordinates online matches and scrimmages with other high schools, and ensures students comply with GPA requirements. But the team itself “is student-led and student-driven,” Burkhart said.

Evan Garst, a senior, pushed for his school to create an esports team this year. He first approached Burkhart. “I was inspired by it,” said Burkhart, who teaches 11th and 12th grade. “Evan and I talked to Principal [Tammy] Newcomb, and she was supportive.”

“Being part of the first-ever Byrd team is pretty cool. Winning a state championship would be even better,” he said.

Virginia high school teams will start preparation for the esports playoffs this month, with finalists determined in January.

Keesee said joining the esports team has helped improve his grades significantly. Burkhart is strict about ensuring students are keeping their grades up, Keesee said. If students fall behind in a class, they can’t practice or compete in matches.

Keesee said he doesn’t want to leave his Smite squad shorthanded, so he’s now an A and B student. His teammate, 10th grader Josh Collins, said elements of the game have helped him with geometry and other school subjects.

Burkhart said he’s proud to facilitate a community for students, especially those who might have otherwise skipped joining extracurricular activities.

“Video games have a bad stigma,” Burkhart said. “These kids, they’re developing skills in communication. They’re working hard in class because they want to be a part of the team.”

Blacksburg High School has three teams competing. Michael Chen, a senior, is the captain of BHS’ Gold team, which was one of four statewide undefeated League of Legends squads as of Nov. 25. Chen co-founded his school’s esports program along with junior Bryan Kim, captain of the school’s White team.

Although Chen and Kim don’t battle on a wooden court or turf field, they said competitive video gaming is still demanding.

“I have to time cool downs,” Chen said. “I have to be constantly looking throughout the whole map.”

What are cool downs? Chen explained them as the short interval that must pass before players can repeat their use of one of four special abilities granted to League of Legends characters.

Chen said he has to keep an eye on his allies’ screens, “so you can see what they’re looking at.” Gaming, he said, requires multitasking that he doesn’t differentiate much from when football quarterbacks and basketball point guards execute plays. “You have to keep a constant stream of communication,” he said.

Chen said success in competitive gaming requires a great deal — often years — of practice. He also said there are clear separations of skill among players.

That separation is evident in the fact that esports, like their traditional counterparts, now have professional and collegiate-level leagues that are exclusive to exceptional gamers.

Chen, a serious gamer since seventh grade, said gaming has opened up an alternative path to college. He said many colleges now have varsity esports teams. He pointed to the University of Maryland as an example of a school that has provided scholarships to exceptional gamers.

“It takes a lot of teamwork, a lot of practice, a lot of communication,” said Jay Mathis, a cybersecurity teacher and BHS’ esports coach. “It’s more than just a computer game.”

Memo from the Virginia High School League to all its student gamers: