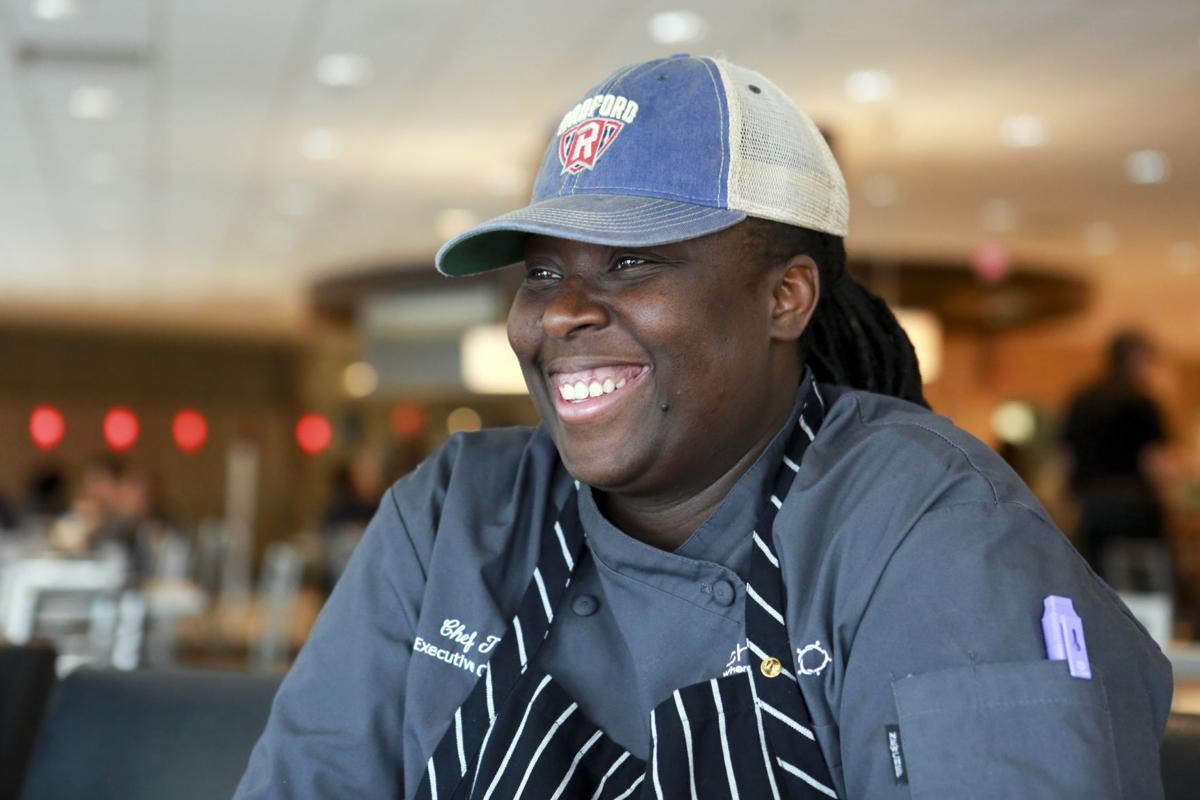 “Chef T” — Torrece Gregoire — is the executive chef at Radford University’s Dalton Dining Hall and has been a contestant on “Hell’s Kitchen,” a reality television cooking show. 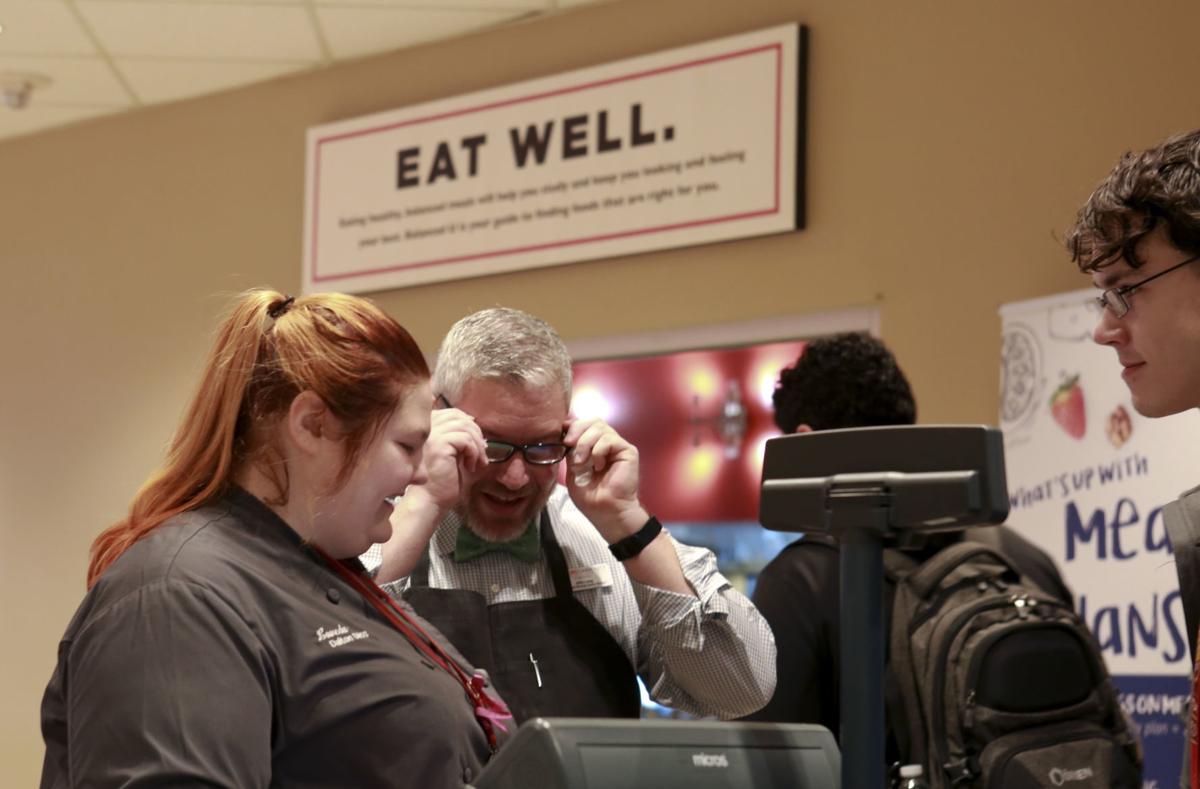 Radford University Dalton Dining Hall directors Loveda Warren, left, and John Long host lunch time check in. “We are their home away from home for food,” said Warren about her student customers. 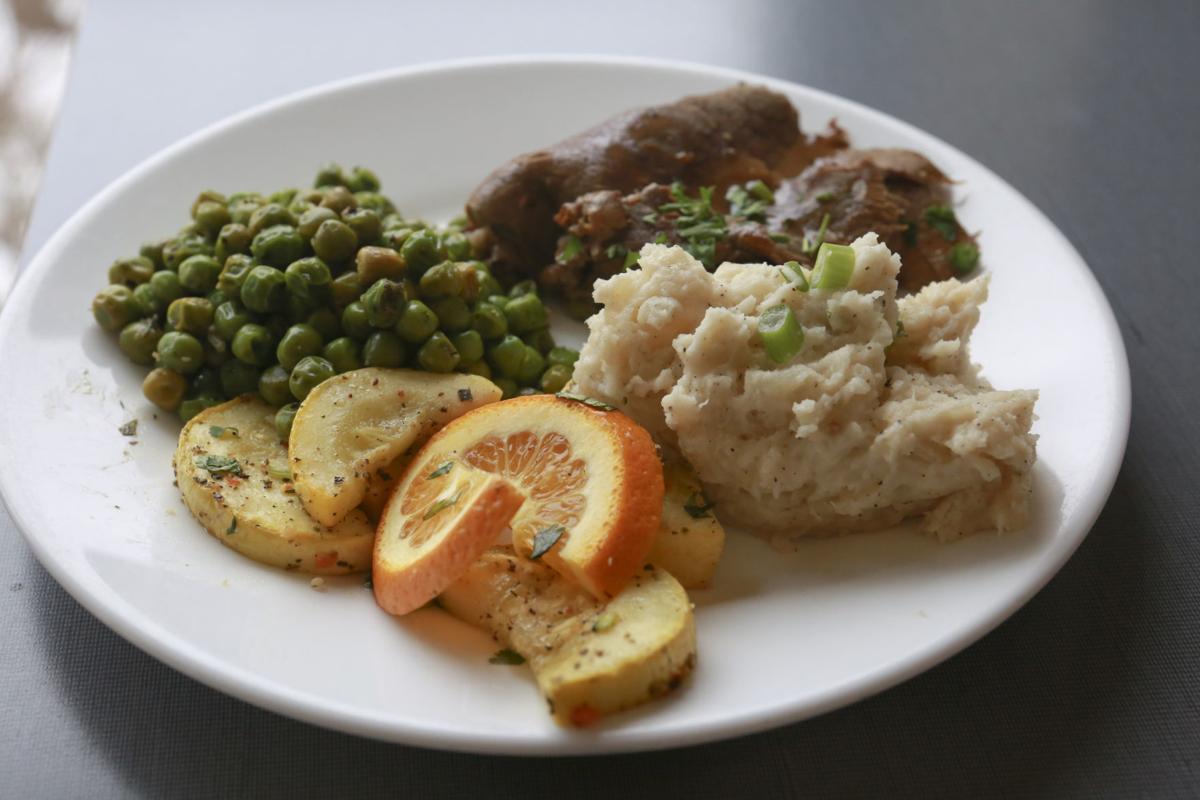 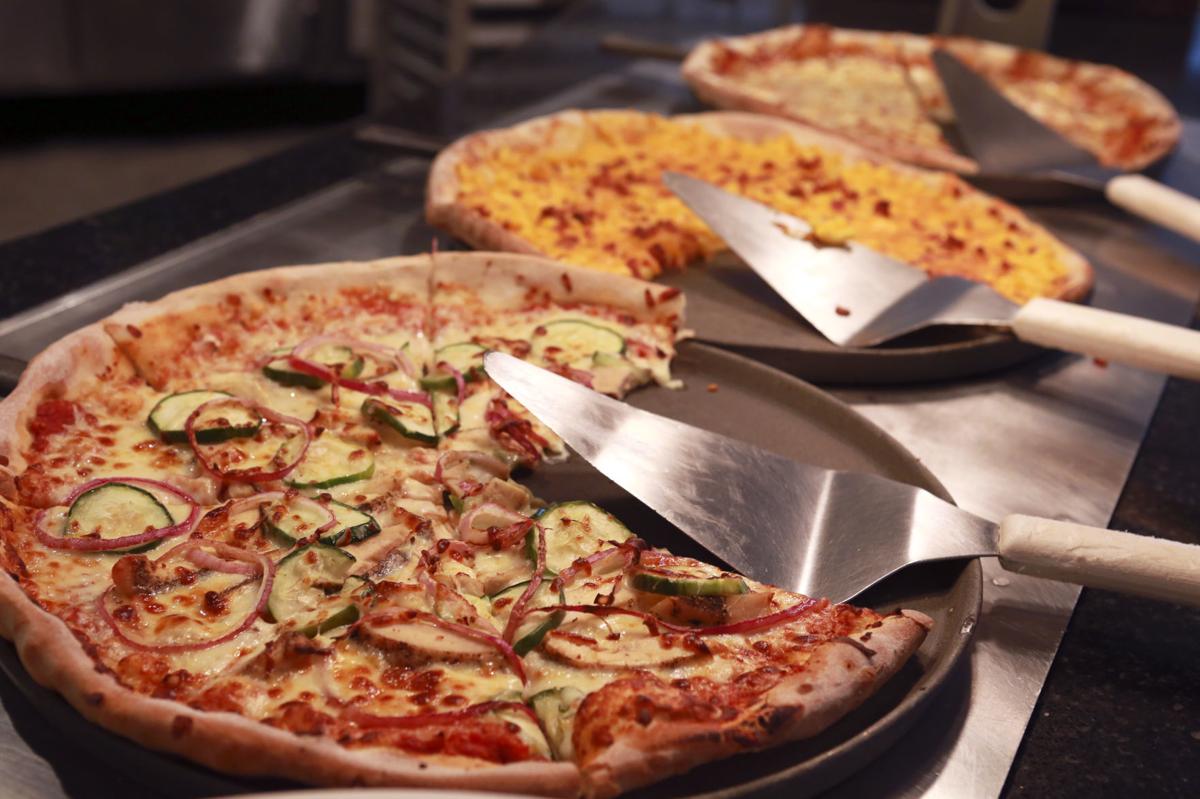 Pizza buffet offerings at Radford University’s Dalton Dining Hall include from left; chicken pizza with cucumber and red onion, mac and cheese pizza with bacon and a veggie cheese pizza. 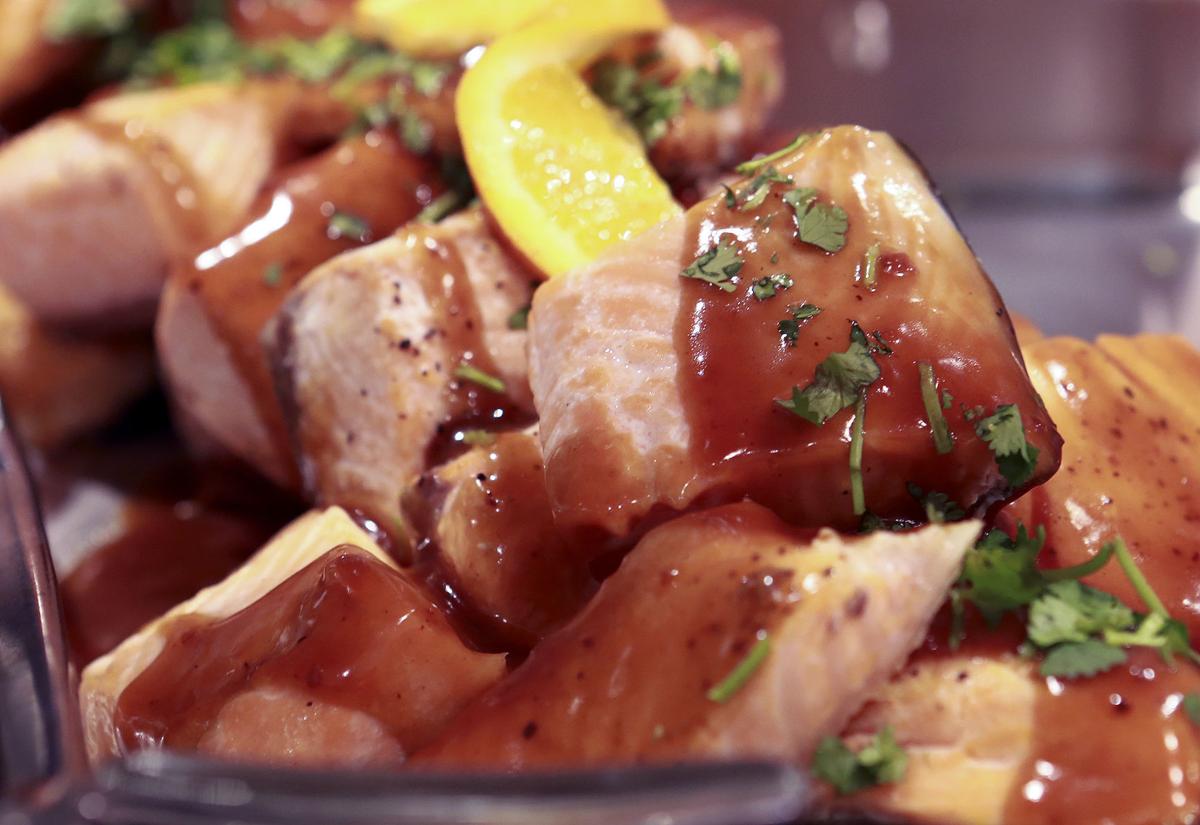 “Chef T” — Torrece Gregoire — is the executive chef at Radford University’s Dalton Dining Hall and has been a contestant on “Hell’s Kitchen,” a reality television cooking show.

Radford University Dalton Dining Hall directors Loveda Warren, left, and John Long host lunch time check in. “We are their home away from home for food,” said Warren about her student customers.

Pizza buffet offerings at Radford University’s Dalton Dining Hall include from left; chicken pizza with cucumber and red onion, mac and cheese pizza with bacon and a veggie cheese pizza.

RADFORD— Torrece Gregoire is no stranger to restaurant takeovers — and her latest conquest is Radford University.

“Chef T,” Gregoire’s nickname, began her culinary journey in the Caribbean with stops all over the United States, including two stints on Fox television’s “Hell’s Kitchen,” where she was a fan favorite. She became RU’s executive chef in August.

“I love Chef T,” said Joe Meade, a university cook who said he’d learned more from Gregoire than in all the other kitchens he’d worked in combined. “And I learn something new from her every day. My repertoire has grown so much under her.”

Before taking her position at Radford, Gregoire was director of culinary operations at the Draper Mercantile, a job she gained after a short “kitchen takeover” there.

But the New River Valley is just a recent stop on a long culinary road.

Gregoire said that her earliest cooking memories were with her grandma in St. Vincent and the Grenadines, a southern Caribbean nation.

She said that when she was a young girl, her grandmother cooked free meals for people who would come by her cousin’s car repair shop that was conveniently located in the front yard of their house.

“If you wanted a hot meal, you would go to her house,” Gregoire said. “She would lift me up to the stove and let me try whatever she was making that day. That aroma and that image always stuck with me.”

She said that most of the ingredients her grandmother used in her cooking were cultivated onsite and that is something she has always strived to maintain throughout her career.

“I have a motto: Eat local, eat well. I am on a mission for sustainability whenever possible,” she said. “I like to learn about the area I’m in and pay homage to the cuisine.”

While Gregoire, 36, has discussed her time on Gordon Ramsay’s “Hell’s Kitchen” more times than she can count, it would be nearly impossible to tell the story of how she ended up in Southwest Virginia without mentioning it.

In 2013, she found out that the show was holding tryouts in Tennessee, but she said she didn’t have the money to make the trip from Atlanta, where she was living at the time. But her brother offered to pay and told her to follow her dreams.

Shortly after her interview, Gregoire was informed that she would be representing Atlanta in season 14 of “Hell’s Kitchen.” She ended up finishing in second place, becoming a fan favorite along the way.

Her popularity on Ramsay’s hit show got her an offer to return as a contestant in season 18 as well, where she finished 12th.

“I learned a lot from Chef Ramsay. What you see is what you get. He isn’t putting on a show when he gets angry, but you know he cares about making you a better chef,” she said.

Following her success on the show, she was invited to do restaurant takeovers, where well-known chefs make guest appearances in kitchens all over the country.

An old classmate of hers — Gregoire graduated from Le Cordon Bleu in Atlanta in 2012 — told her she should come do a takeover at the Draper Mercantile.

After the event, she was offered a position leading its kitchen.

When a former colleague offered her a position at the university last summer, she had one stipulation: She wanted to cook good food.

“They told me I’d be able to use real ingredients and make wholesome food, so I said I was in,” she recalled.

So far, her bosses have been thoroughly impressed with her performance at RU.

“Chef T’s expertise and passion for food and commitment and dedication to providing an exceptional culinary experience has enhanced the Radford experience. We are fortunate to have her as a member of our campus community,” school President Brian Hemphill said.

Adrean Harris, director of RU dining services, said that Gregoire has been a great addition to the team.

“As a talented chef, she focuses on training and the standards that can build an outstanding culinary team,” he said. “Her dynamic personality is not only a boost to our team, but also is far reaching into the New River Valley community.”

Gregoire said that having her own TV show one day is her dream, but she is more concerned with giving back to the community that has given her so much.

“We have such a huge opioid epidemic in this area and people who need jobs and I want to be an advocate for them,” she said. “I will do whatever I can to give someone a second chance, even if it means calling corporate and telling them that a candidate deserves a second chance.”

Gregoire said that she wants to do as much as she can for the community and is happy with what she is doing at RU and throughout the area, often cooking at a variety of private events.

“The rolling hills of Virginia are such a beautiful place to be,” she said. “I don’t think I’m leaving here anytime soon.”