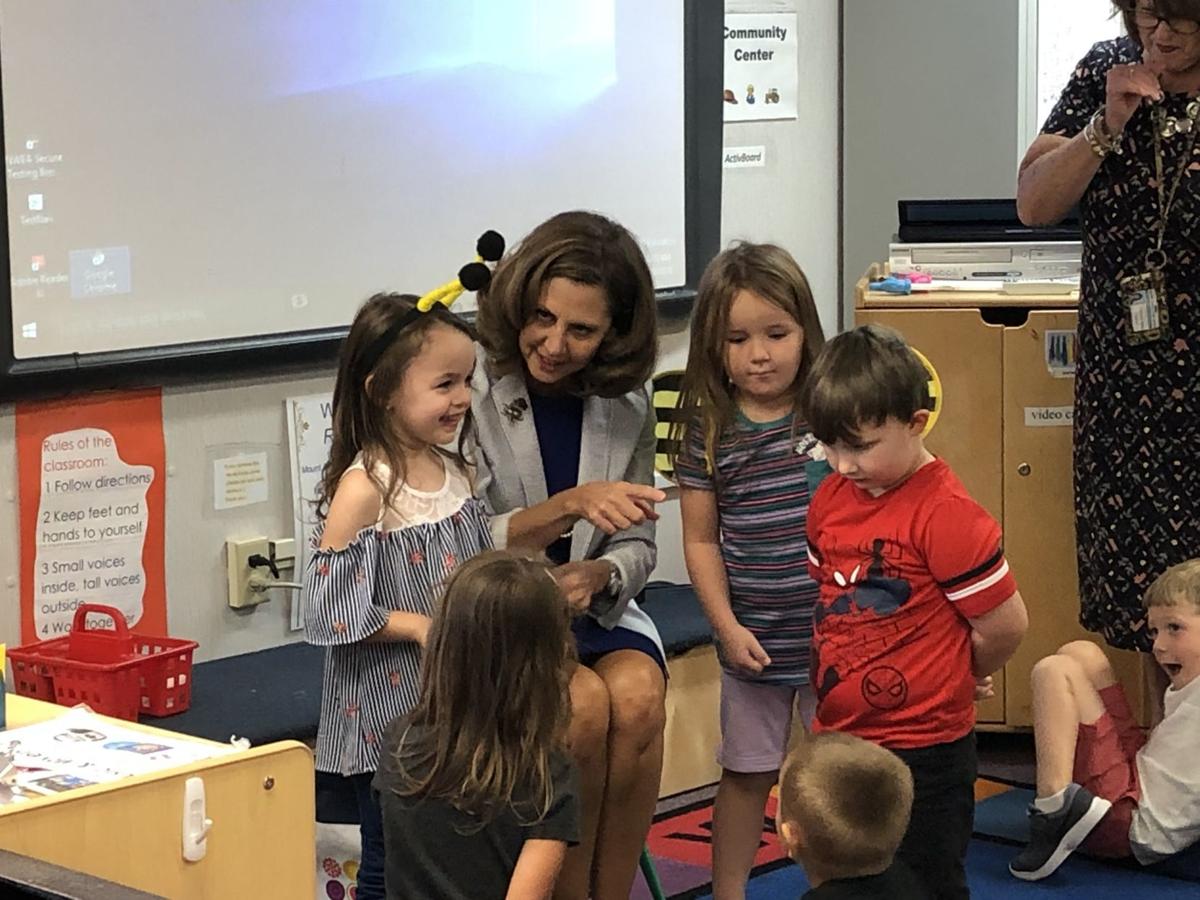 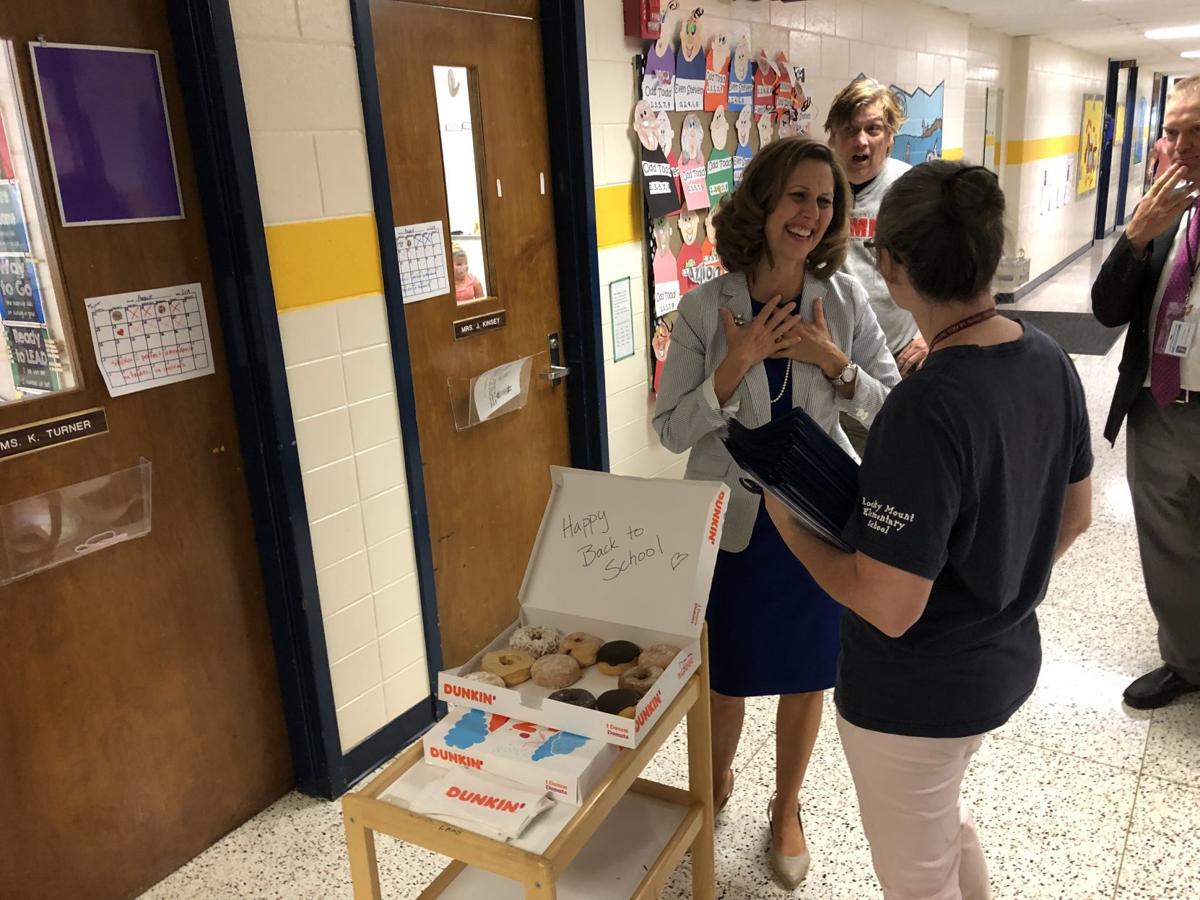 Virginia first lady Pamela Northam, a former teacher, passes out doughnuts to staffers at Rocky Mount Elementary School during her Thursday visit to the school to highlight the importance of early childhood education.

Virginia first lady Pamela Northam, a former teacher, passes out doughnuts to staffers at Rocky Mount Elementary School during her Thursday visit to the school to highlight the importance of early childhood education.

ROCKY MOUNT — Pamela Northam walks around the classroom with a live beetle in the palm of her hand.

She tells the prekindergarten students surrounding her, who look at the critter under a magnifying glass held by Virginia’s first lady, that the bug is iridescent.

The children slowly repeat the word — likely new to most of these 4 year olds.

As a former high school biology teacher, Northam is right at home in the Rocky Mount Elementary School classroom, and with the beetle, which she later allowed to roam on her lapel.

Northam visited Rocky Mount, where she also stopped at the Sonnia Jones Day Home, on Thursday to promote early childhood care and education. Earlier this year, the state received a $9.9 million preschool development grant from the federal government.

It’s an issue near to Northam’s heart. The first lady noted that she and Gov. Ralph Northam were brought together by their work in pediatrics in Texas, he as a neurologist and she as an occupational therapist.

“We met over developmental pediatrics and so we knew even in our professional lives how important those first few critical years are in the development of the brain,” she said.

Investing in these programs is essential, Northam believes. About two-thirds of all parents work outside the home, she said, but many struggle to find quality early childhood care and education offerings. And paying for them can be a “desperate struggle.”

She said those costs would be typical for a family with two children age 4 and under. It can be particularly expensive for infants, care for which can cost more than a year’s college tuition, an expense many parents don’t expect to have until after their children graduate high school, McMahan said.

The local United Way chapter is the lead agency for one of a handful of pilot communities working with the state on the preschool development grant. Northam stressed the importance of working with local partners, who know their communities best.

McMahan said the first lady has taken a “boots on the ground” approach, visiting numerous schools to get a sense of their successes and challenges as grant participants work to bolster the state’s early childhood system.

It’s what brought Northam to Rocky Mount on Thursday, where she read to the school’s pre-K class and also passed doughnuts out to teachers throughout the building, wishing them a sweet start to the year.

Principal Lisa Newell said it was an honor to have Northam, whom she called an advocate for education, visit Rocky Mount Elementary.

“You can tell she’s a teacher at heart, and by trade,” Newell said, after watching Northam read to the children.

Northam left gifts behind for the pre-K students. As she prepared to pull them from a bag, jingling as if it was filled with change, Northam asked the students to guess what they’d receive.

“Money!” they all cried in unison, prompting laughter from the adults in the crowd.

No, Northam said, though they are working very hard on teacher compensation.

It was the first lady’s coin. You can’t get those at the bank, Northam said, only from herself or the governor.

“He’s like the principal of our whole state,” she explained.

Northam said she’s hopeful about the future of early childhood care and education as she thinks more people are recognizing its importance, including the business community.

She gave Amazon, which selected Northern Virginia for its second headquarters, as an example: The company realizes the importance of investing in “growing those minds” for its future workforce, and also that working parents need access to reliable childcare.

“We can bring broadband to areas like this, we can bring great jobs,” Northam said. “But unless those families have the child care that they need, they’re not able to take advantage of that.”