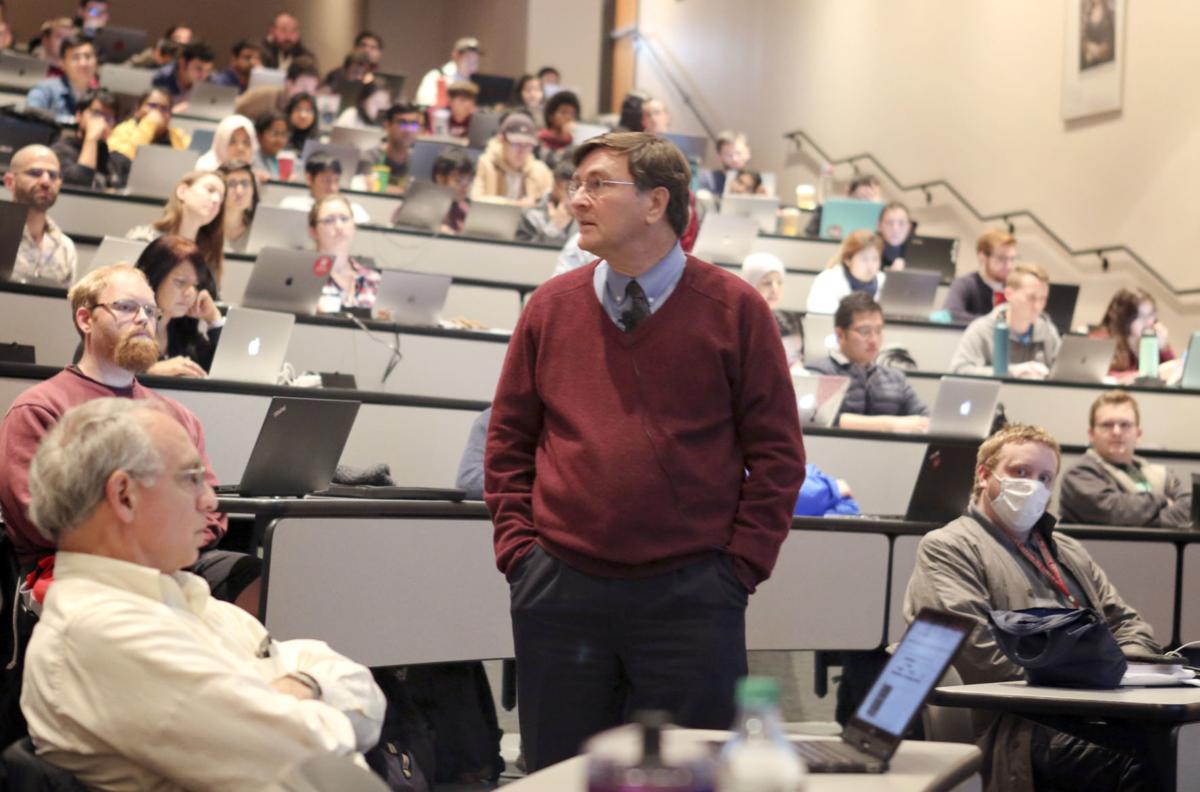 Scott Stornetta speaks about the blockchain’s history and its current promise during a lecture series on Friday. Virginia Tech is hosting an inaugural “Blocksburg Summit: Blockchain and Beyond,” Sunday through Tuesday at the Inn at Virginia Tech. 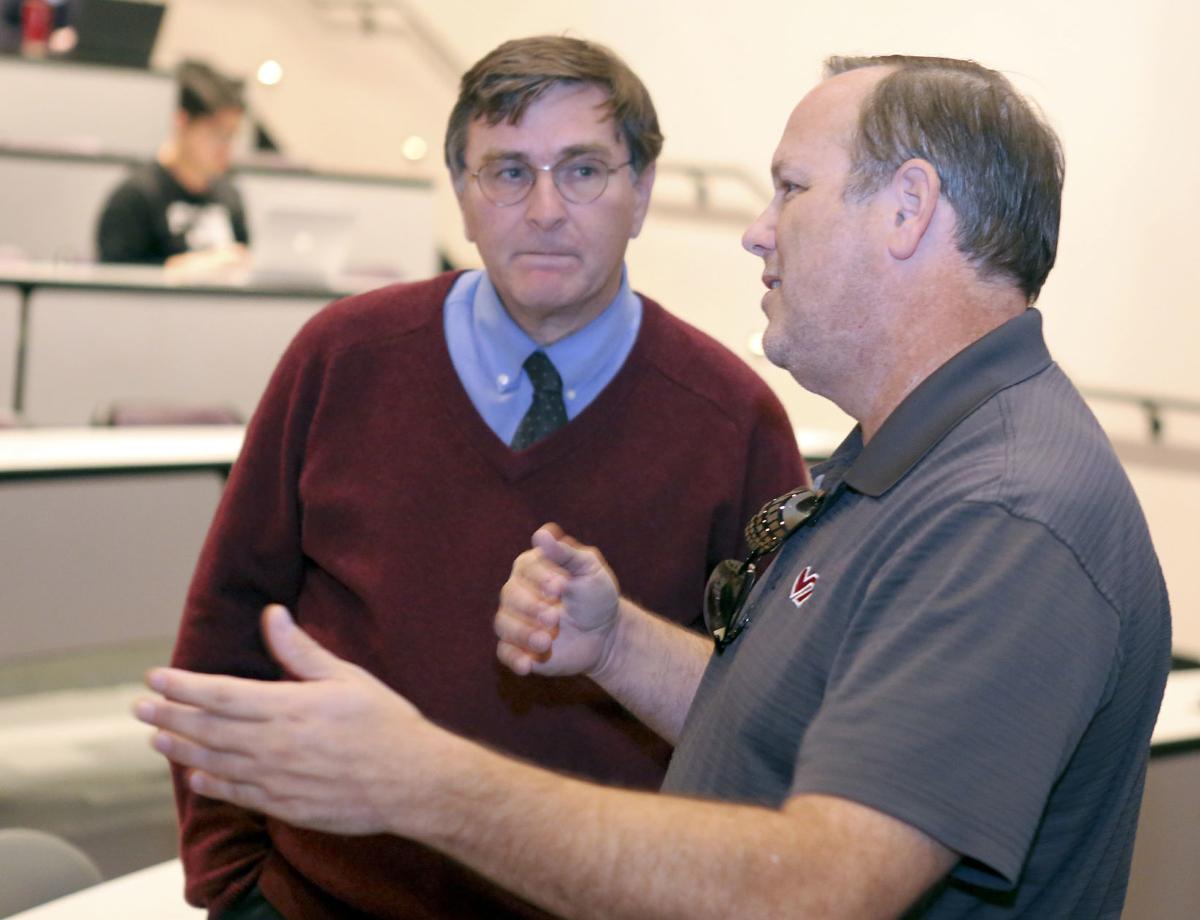 Scott Stornetta speaks about the blockchain’s history and its current promise during a lecture series on Friday. Virginia Tech is hosting an inaugural “Blocksburg Summit: Blockchain and Beyond,” Sunday through Tuesday at the Inn at Virginia Tech.

BLACKSBURG — Before Scott Stornetta took to the podium in a Virginia Tech classroom on Friday, his professor host introduced him as the “Forrest Gump of computer science.”

Like the movie’s title character, Stornetta appeared to show up at key moments in tech history, through his research at a Xerox-founded firm in Silicon Valley and at a spinoff of then-Bell Labs. His work there would later provide him another moniker as the “grandfather of the blockchain.”

So it was fitting that Stornetta’s talk, part of the computer science department’s distinguished lecture series, by serendipity fell days before the university kicks off a major gathering of leaders in blockchain technology.

The “Blocksburg” summit, which runs Sunday evening through Tuesday, is the first industry hobnob of the university’s so-called Blockchain Ecosystem Catalyst project. That initiative began last year to build on a $3 million gift to the computer science department from Block.one, a company founded by a Virginia Tech alumnus that now has an office in Tech’s Corporate Research Center. As Tech solidifies its commitment to pump out computer science graduates, the university seeks to position itself as a leader in blockchain technology research.

Blockchain is a network of digital records linked together securely so that data can’t be modified falsely. Its most famous application is Bitcoin, where value of the cryptocurrency lies outside of a central authority and is determined by users who can see who owns what.

The summit features co-founders of Block.one Brendan Blumer and Dan Larimer, as well as Hester Peirce, a U.S. Securities and Exchange Commission member whose penchant for blockchain has earned her the title “cryptomom” from cryptocurrency bros.

(The SEC is involved in regulating digital currency sales by companies, including Block.one, which agreed last month to pay the SEC a $24 million civil fine.)

The university expects between 200 and 300 people will attend the series of panels and “fireside chats.”

“It’s not a mass sort of rock-and-roll event,” said Cal Ribbens, the head of Tech’s computer science department. “It’s more of a place where people can talk and interact and ask real, hard questions.”

The summit is estimated to cost about $80,000, according to a Tech spokesman, an amount he said is typical for a gathering its size. A dozen speakers will receive standard compensation from the university, to include travel expenses, meals and lodging. Registration is $150, or $25 for students.

Many blockchain conferences focus on one particular area of the topic, such as digital currencies, regulations or the technology itself, said Kirk Cameron, a professor and head of research in the computer science department who introduced Stornetta’s talk.

“We’re trying to do the intersection of all three,” Cameron said of the summit. “The idea is if you get people from all those groups talking together, maybe some good will come from it.”

Before the summit took shape, Stornetta was invited six months ago to speak at Tech, after a public call by Dan Casey, a metro columnist at The Roanoke Times and high school friend of Stornetta’s.

At Friday’s talk, Stornetta, wearing a humble maroon sweater, outlined the genesis of what would become blockchain.

Back in 1991, he and a fellow researcher were concerned with the likelihood that digital documents could be changed with no sign of alteration.

That led to the idea that a wide network of users would be needed to verify the timestamp of when a document was created or altered. That would become vital in disputes of who first came up with an invention, for example.

That research paper and others by Stornetta were later cited by the creator of Bitcoin.

Stornetta demonstrated blockchain Friday by inviting the roughly 100 students who attended to access his online site.

Stornetta wrote in that blockchain site that Saturday’s Virginia Tech vs. Wake Forest University football game would result in an 18-16 Tech win. But when he went back and flip-flopped his bet, other users would have to approve the change as valid. Their original copy of his prediction belied his new claim.

While Stornetta said he’s “bullish” on cryptocurrencies, he also cautioned potential entrepreneurs to think beyond that application and deeply about the social value of the technology — which includes its implications for the verification of voting records, online identities and food supply chains.

“I think this is very much a potentially very humanizing peer-to-peer innovation,” Stornetta said after the talk. “It doesn’t mean that it’s not going to lead to tendencies to concentrate power as well, just because there are first movers and that’s kind of how power concentration begins.”

But the grandfather of the blockchain didn’t seem fazed that his ideas had led to grandchildren touting billion-dollar companies built on a speculative digital currency industry.

“I don’t have a Frankenstein feeling. Not at all,” Stornetta said. “I made sure that we can have records that we can trust. That’s just not a bad thing.”

More information on Tech’s summit can be found at www.cpe.vt.edu/blocksburg.