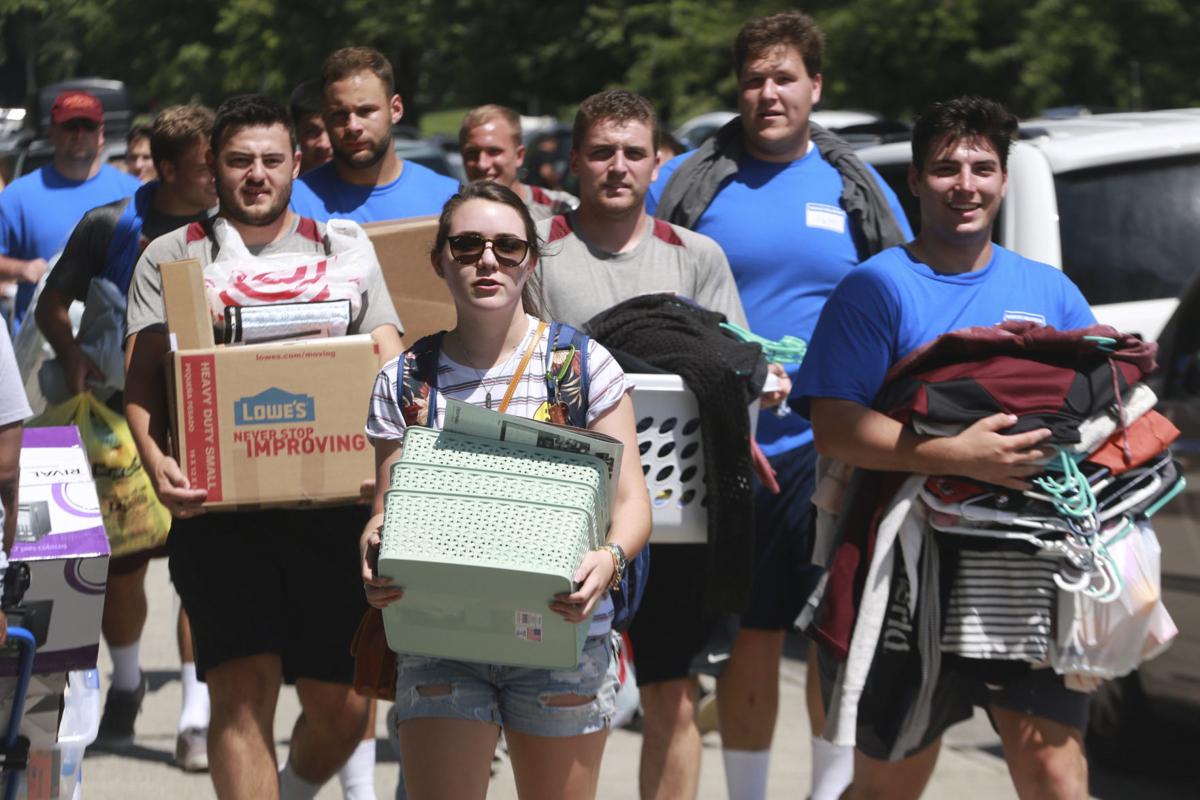 Blue-shirted Hokie Helpers lend a hand on the first day of a Virginia Tech student move in. More students will need help this fall. 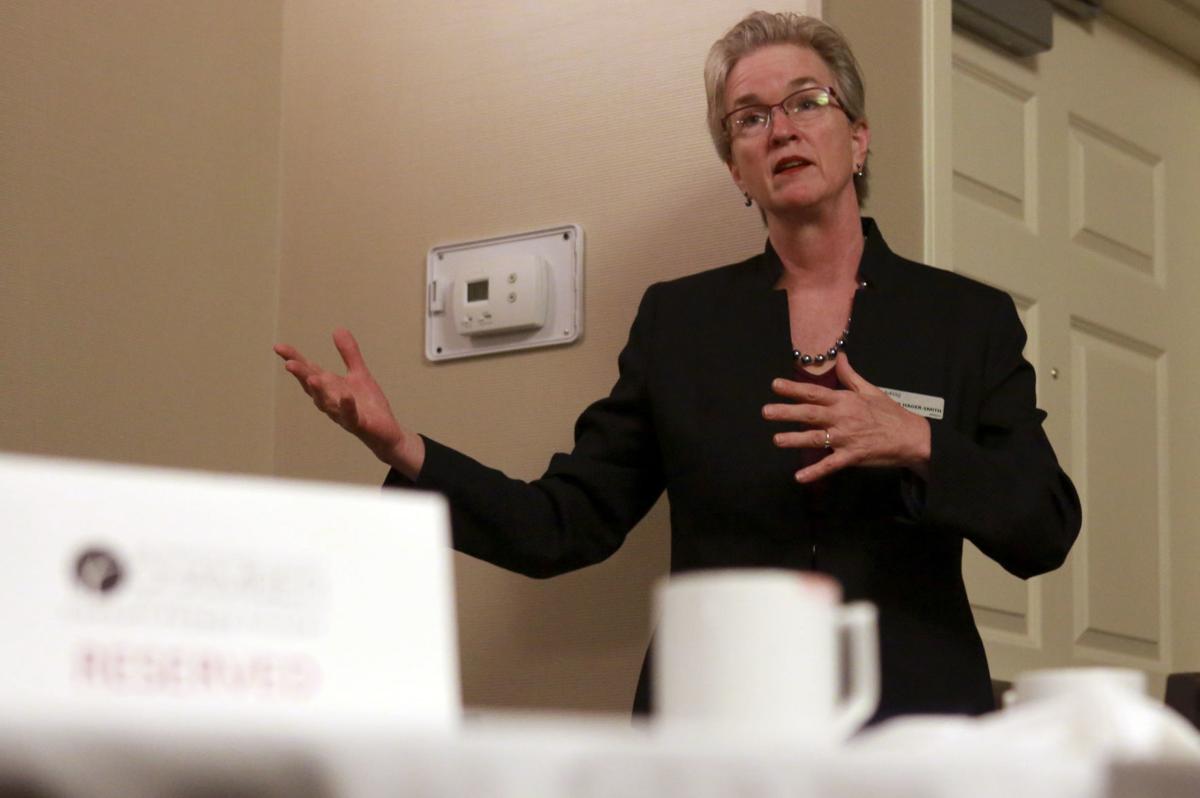 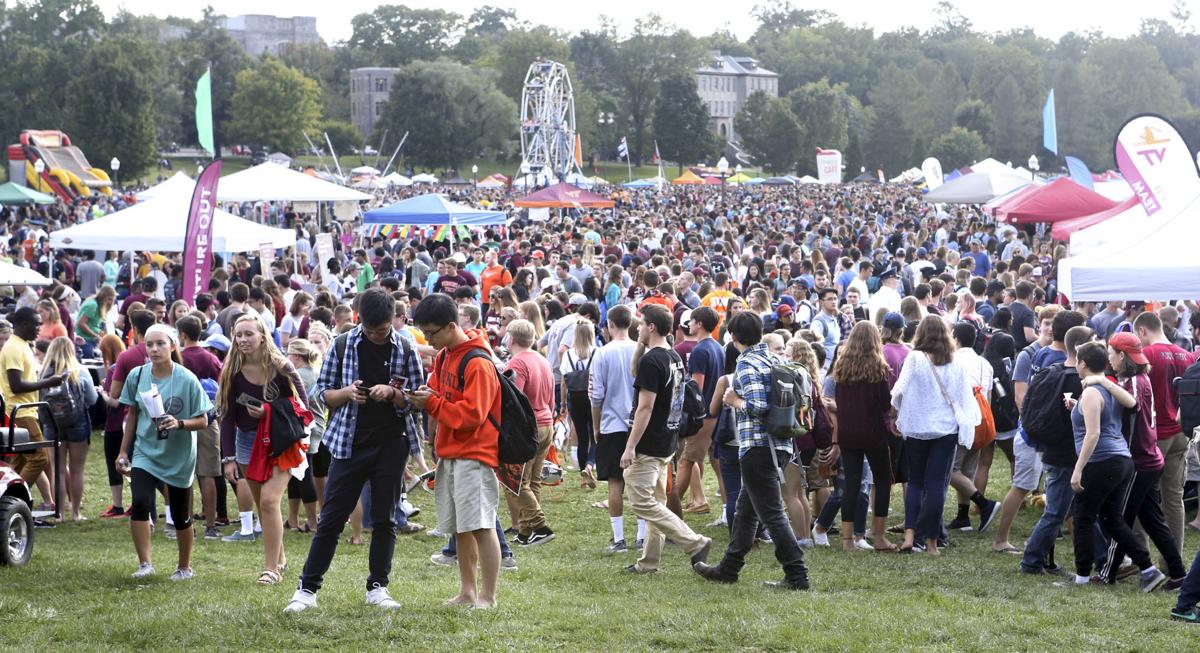 Crowds such as the annual one at Gobblerfest will not be getting any smaller at Virginia Tech and in Blacksburg.

Blue-shirted Hokie Helpers lend a hand on the first day of a Virginia Tech student move in. More students will need help this fall.

Crowds such as the annual one at Gobblerfest will not be getting any smaller at Virginia Tech and in Blacksburg.

BLACKSBURG — Everything is on the table.

Virginia Tech will likely get 1,000 more than the 6,600 students that were initially planned. Tech and town of Blacksburg officials are looking at every possible way to accommodate the over-enrolled class.

Tech is securing places for them to sleep in dorm study lounges, extra beds in double rooms, local apartment complexes and hotels. They’re hiring extra faculty to teach the students and they’re making sure every classroom has a class inside it from 8 a.m., until the early evening. They’ve even made a headline-grabbing offer of money for first-year students to delay their enrollment, though so far less than 25 have taken them up on it as of Friday.

Will it all be enough? Maybe.

But will there be headaches?

“Neither the Virginia Tech campus in Blacksburg nor the town of Blacksburg is fully equipped to accommodate a thousand more students than anticipated without disruption,” Tech President Tim Sands said in his remarks to the university’s Board of Visitors last week.

Virginia Tech’s leaders have framed the surge as a good problem to have. In a time when demographics are tightening across Virginia and the nation, it’s the opposite challenge faced by almost every other four-year public institution in the state.

Town officials said they’re concerned with the sudden growth, mostly for the sake of their “townie” constituents who are a shrinking minority in Blacksburg as young New River Valley families look to Christiansburg and unincorporated Montgomery County for housing.

Councilman John Bush said many of the complaints he’s heard from locals are the same. But this time, something is a little different. It’s the suddenness, he said.

“We live in a small Southern town,” Bush said. “People don’t like change and they certainly don’t like fast change.”

A good problem for whom?

In university communications, the challenge has been pitched as a good problem to have.

Virginia — like the nation — is facing a demographics challenge and as of this spring, Tech and the University of Virginia were the only schools in the state that initially met and exceeded their enrollment goals for fall 2019, according to Tech enrollment officials.

The strength of the university and its academic reputation were highly cited by freshmen who are enrolling this fall in a survey distributed to them upon acceptance.

Town leaders, though, haven’t been as complimentary of the university when it comes to the enrollment conundrum.

“It’s uncomfortable to feel challenged in this way,” she said.

Communication, though, has improved as a result. And Tech has vowed to keep the town more informed of the goings-on at the university moving forward, she said.

That’s a good thing, Bush said. Sometimes, he said council members feel powerless as the university mandates change on campus that spills out into the community.

“The town has zero regulatory authority over the state agency,” he said. “We can’t compel the university to do anything.”

The university appears to want to move forward together, Hager-Smith said.

“What I see is a university that is taking responsibility for its gaffe,” Hager-Smith said.

Tod Massa, director of policy analytics for the State Council of Higher Education for Virginia, said universities across the state could be affected by the over-enrollment.

It’s not clear yet, but the 1,000 extra students accepted at Tech were likely going to go to college somewhere, he said. And some of them might have even gone to other colleges in Virginia, potentially exacerbating the problem of under-enrollment at other schools.

“We have to watch this very closely, not because there should be any reaction to it,” Massa said. “But we need to understand how it affects all other universities.”

How did this happen?

No. 1: A general interest in Virginia Tech and its academic reputation and visibility that made the school attractive.

Incoming students made this apparent in what they’ve told the university, Clarke said.

No. 2: Significant changes to recruiting that apparently made Tech more attractive.

The university changed up its system of admittance for the students coming in fall 2019 in favor of a more “holistic” approach that put more weight on essays than in the past.

Campus visits were also a lot more common, according to the report, the number of visitors was 78 percent higher than in 2018 and the “ability to visit the campus likely played a role in converting applicants to enrolled students,” the report said.

Tech also developed and applied new ways to leverage financial aid for students to get more to attend. More students apparently said “yes” than anticipated, but also the number of students who did not receive financial aid also increased by 42 percent when compared to the previous year.

No. 3: Data that didn’t necessarily reflect the changing attitudes of students. Essentially, the models Tech utilized had insufficient data to analyze.

“We were dependent on model reflections of process rather than student behavior and choice,” Havens Gerardo said.

When looking at how offers went out the models were essentially flawed. For example, the model Tech used in engineering anticipated a yield of 27 percent of students accepting admittance. Instead, 33 percent accepted. That college experienced about half of the over-enrollment university-wide.

Kevin Matos said he is a little nervous about coming to Tech in the fall. He doesn’t know where he’ll be living as he’s on a housing waitlist, but he’s confident he wants to live on campus.

He said he didn’t put much thought into the three offers Tech put on the table to incentivize the enrollment day.

Tech offered a $1,000 scholarship to take a gap year. Matos didn’t really want that. He wants to get to school now.

Tech offered a year’s worth of community college tuition. He was unsure how credits would transfer and he didn’t want to delay taking classes that pertained to his engineering major.

Tech offered an opportunity to start in the summer, take either fall or spring classes, and then take summer courses in 2020. Those courses start next month and it would be logistically difficult for Matos to move down from Richmond.

But most importantly, Matos said, he just wants to go to college after working hard to get into Virginia Tech’s engineering program.

“I’m eager to start the next step in my life,” he said.

Luke Elkins, another incoming freshman from Annandale, said he talked with his parents about it. But like Matos, the draw of a college experience was too much to resist for the offers.

“It’s not worth putting off college for a full year,” he said.

It appears a vast majority of the 1,559 Virginia students offered the delayed enrollment options from Tech have similar attitudes. As of late last week, less than 25 incoming students had applied to take the offer, according to Clarke. It’s unlikely there will be another round of offers, he said.

That number is certainly disappointing for the university. But, Tech officials certainly weren’t banking on that solution. It’s going to take a lot of different efforts to accommodate the students.

As of late last week, 118 incoming freshmen indicated they want to live off campus, waiving a typical requirement.

The university has also begun offering financial incentives to buy out housing contracts of upperclassmen living on campus to increase housing for the remaining freshmen.

Mayor Hager-Smith said that there simply isn’t enough room in town for all the students.

In the future, there will be for classes of this size. She pointed to 3,000 additional bedrooms approved for development by the town in the last several years. That Tech is absorbing about 500 should make things OK, though it will be tight, she said.

“We know we need student housing,” Bush said. “But whose town is it and who lives here?”

A diverse group of people with varying needs will call the town home in the future, town Councilman Michael Sutphin said. But to maintain that diversity and to make the town attractive, the town needs a consistent voice as Tech continues its expansion.

“The university has to see Blacksburg as a partner in managing growth,” he said.

Who will teach these students?

Faculty Senate President John Ferris said during a presentation to Tech’s board that he and his colleagues are committed to maintaining a quality education, though they are concerned about the burden of added time in the classroom stretching them thin.

“Faculty are ready to continue to provide a high quality education,” Ferris said.

He said he hoped for additional compensation for faculty who take on classes in the evenings.

“Additional students do put pressure on the academic units of the university,” said Sally Morton, dean of the College of Science.

The impact of the students will resonate in almost every department, but especially in those where many students need to take freshman level classes to advance in their various majors, she said. In her college that includes faculty in disciplines like chemistry, physics and mathematics.

There will be more faculty on campus. The stretched colleges include Tech’s Colleges of Science, Engineering and Liberal Arts and Human Studies. Those colleges are already in the process of hiring 23, three and eight full-time equivalent additional teaching faculty, respectively, Clarke said.

On top of that, Clarke said, the university is looking at ways to maximize its space. That includes more classes at 8 a.m., and in the early evening. Right now, there are no plans to teach classes on the weekends, he said.

Enrollment in years to come

Tech officials know about the rumors.

And no, there is no conspiracy to grow the school beyond 30,000 undergraduate students by 2023, a long-stated goal that recently became a key element of the university’s strategic plan, they said.

Beyond just saying that, though, why would it make any sense to put themselves in a tough situation, Clarke said.

“This was not part of our design, we are working hard to address the issues,” Clarke said. “It would be very difficult to explain why this would be rational.”

Tech officials are actively tweaking their model. Data from this last cycle will inform the university how students will behave moving forward. There was change this year, Clarke said, and with it came the potential for something like this.

But, he vowed Tech would avoid another situation like this one when recruiting and accepting new students moving forward.

“We have the expectation we can do better in the future,” Clarke said.