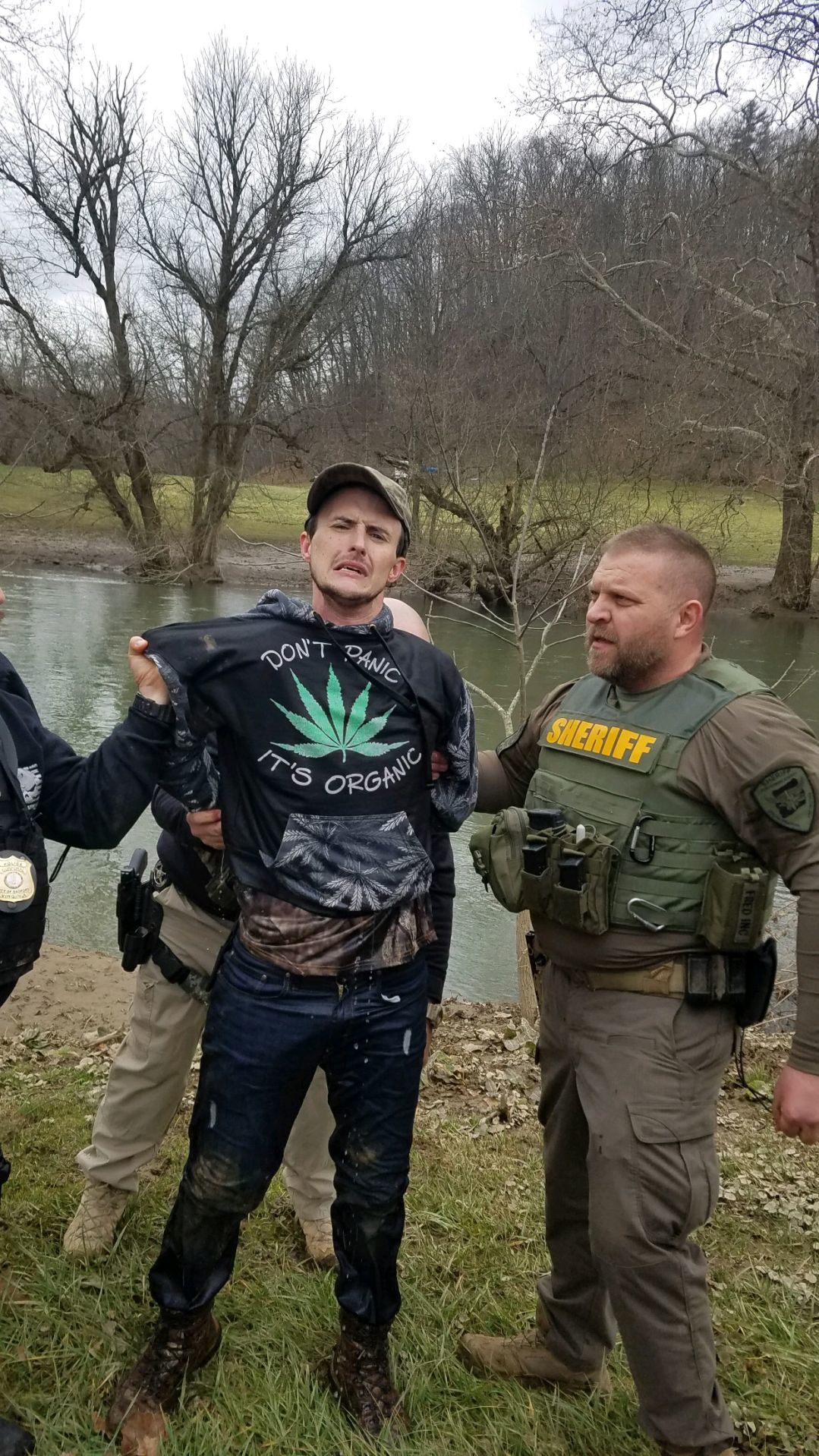 Cody Drain was arrested in January in Wythe County after a manhunt that lasted several days. 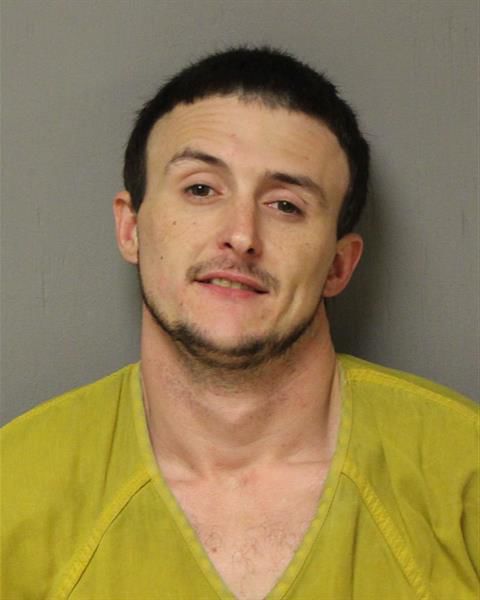 CHRISTIANSBURG — Cody Ryan Drain, who drove away from custody in a deputy’s vehicle during a crime spree that reached from Christiansburg to Rural Retreat, entered no-contest pleas Monday to resolve 19 charges that he faced in Montgomery County.

Circuit Court Judge Robert Turk found Drain guilty of all 19 counts, including felony charges of escape and assault on a law enforcement officer, and scheduled a sentencing hearing for Nov. 18.

Drain, 27, of the Wythe County community of Barren Springs, faces a maximum sentence of 196 years and 30 days behind bars, Turk said. Sentencing guidelines likely will recommend a shorter prison term.

There was no agreement about sentencing connected to Drain’s pleas, said his attorney, Bruce Phillips of Christiansburg.

Drain’s arrest in January followed a string of flights from officers that began before Christmas. It ended when a manhunt located Drain in Barren Springs — and Drain made a final, unsuccessful attempt to evade capture by leaping into the chilly waters of Reed Creek.

A photo of deputies holding a soaked Drain, clad in a hoodie decorated with a marijuana leaf and the words “don’t panic it’s organic” attracted social media guffaws.

Monday’s hearing follows similar pleas last week in Wythe County Circuit Court. There, Drain pleaded guilty to grand larceny, eluding police, and two counts of possessing drugs with the intent to distribute them. He was sentenced to serve two years and three months in jail on the Wythe County charges.

Drain still faces a grand theft auto charge in Pulaski County and has a plea hearing scheduled there for Sept. 10.

In Montgomery County, besides the escape and assault charges, Drain was convicted of two counts of eluding, possessing a Schedule II drug with the intent to distribute it, possessing marijuana, possessing burglary tools, receiving a stolen Nissan Sentra, resisting arrest, driving while intoxicated, driving on a suspended license, two counts of felony breaking and entering, two misdemeanor counts of breaking and entering, three felony counts of larceny, and one misdemeanor count of larceny.

The complicated backstory to the charges included a Dec. 18 theft of a pickup truck in Wythe County and Drain’s flight in the truck from Wythe County officers. Then on Christmas, a gold Nissan Sentra was stolen in Pulaski County.

Jensen said that on Dec. 30, a patrolling Montgomery County sheriff’s deputy locked eyes with the driver of a gold Sentra at a gas station on Virginia 177, near Interstate 81’s Exit 109. As the Sentra drove away toward the northbound interstate, the deputy followed, calling in the vehicle’s license plate to dispatch. Told that the car had been reported stolen, the deputy turned on his flashing lights.

But the Sentra did not stop. Soon the deputy and his quarry were weaving through traffic at more than 100 mph, Jensen said. Other officers set out spike strips to try to stop the Sentra near Exit 118 but it drove around them.

The Sentra left I-81 at Exit 128, went down North Fork Road to Roanoke Road, then headed back toward Christiansburg, Jensen said. More spike strips were spread near Den Hill Road and again the Sentra drove around them, Jensen said.

The chase ended when the Sentra abruptly stopped and Drain emerged and ran — and was quickly arrested, Jensen said.

In the Sentra was a plastic container that held six baggies filled with white powder, Jensen said. The state crime lab tested one of the bags and found it held methamphetamine. Also in the car was a green, leafy material that field-tested positive for marijuana, Jensen said.

The Sentra held a ski mask, blow torch, Dremel tools, and a large ring of keys. A woman who was riding with Drain told officers that the keys were to properties that Drain planned to rob, Jensen said.

There was a written list of the ingredients used to make meth, Jensen said, and another list of people who owed Drain money. Drain told officers that he had smoked meth earlier in the day and a hospital blood test confirmed it, Jensen said.

It was after the hospital test that Drain was taken to the magistrate’s office in Christiansburg to have his arrest paperwork processed.

But while Drain was waiting alone in a sheriff’s deputy’s vehicle for his turn with the magistrate, he slipped his handcuffs from behind his back to his front. He pushed through a hatch in the partition that separated the sheriff’s office vehicle’s front and back seats, Jensen said.

The deputy had left the keys in the vehicle and Drain quickly drove away, Jensen said.

Drain was immediately pursued by Christiansburg Police Officer T. Lusk, who also was in the magistrate’s parking lot, Jensen said. The chase raced south on Franklin Street at faster than 90 mph, then turned onto Elliott Creek Road, Jensen said.

Drain stopped and Lusk pulled up, ran to the other vehicle, opened the driver’s door and grabbed Drain, Jensen said. Drain responded by hitting the gas, dragging Lusk for several feet and striking him with the door jamb before the officer let go and rolled away, Jensen said.

Drain drove into the creek and escaped. Lusk’s patrol car could not navigate the creek, Jensen said, but the officer followed Drain on foot — only to find the deputy’s vehicle stopped and empty.

Jensen said that the sheriff’s office vehicle’s dash cam captured the rocking of the vehicle as Drain exited, then showed him wading through the creek, still cuffed, and disappearing into the woods.

Drain found a garage where he left his wet clothing, replacing with boots and a jacket and other clothes he found. He also took a pistol, Jensen said.

At another residence, Drain took food, a blanket, pills that he thought were painkillers, and other items. At a third address, he found a Volvo with the keys in it and, after stopping to buy gas, drove to Rural Retreat in Wythe County, where officers found the car in a church parking lot, Jensen said.

Drain later told officers that as he searched for supplies, he found a set of diagonal cutters that he used to cut the chain of his handcuffs, Jensen said. When Drain bought gas, he hid the remaining handcuff bracelets by pushing them up under his jacket sleeves, he told officers.

On Jan. 2, a task force assembled to capture Drain searched a Barren Springs house and initially did not find him. But the search did locate a Volvo key and half a pair of cut-off handcuffs, Jensen said.

Officers went on to Drain’s parents’ home, also in Barren Springs, then got word Drain was back at the first house they’d searched. Returning, they found Drain outside, at the edge of Reed Creek. He tried to swim away but returned to shore and was captured.

Jensen said that officers asked Drain why he’d stolen the Montgomery County deputy’s vehicle. “He said he saw an opportunity for freedom and he took it,” Jensen said.

As for the pistol he found, Drain told officers that as he sat in the woods listening to dogs and a helicopter and imagining they were searching for him, he decided it would be better not to have a gun and hid it under some leaves.

A search after Drain’s arrest located the firearm, Jensen said.