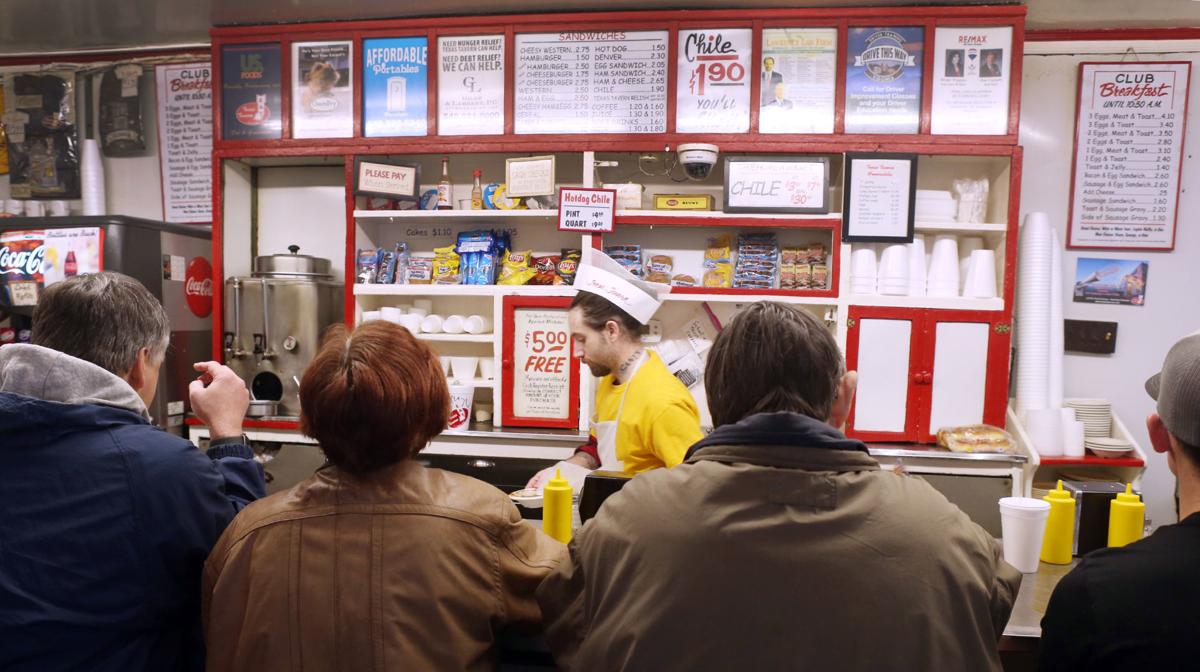 Dennis Hayth waits on Texas Tavern diners on Wednesday. The counter is lined with bottles of mustard, but no ketchup. When asked if they serve ketchup, employee Randy Dodd said, “Women and kids under 11 get it for free but if you’re a guy or over 11 you gotta ask for sissy sauce.” Dodd has worked for Texas Tavern since 1994. He said they did not start serving ketchup until 2000 or 2001. 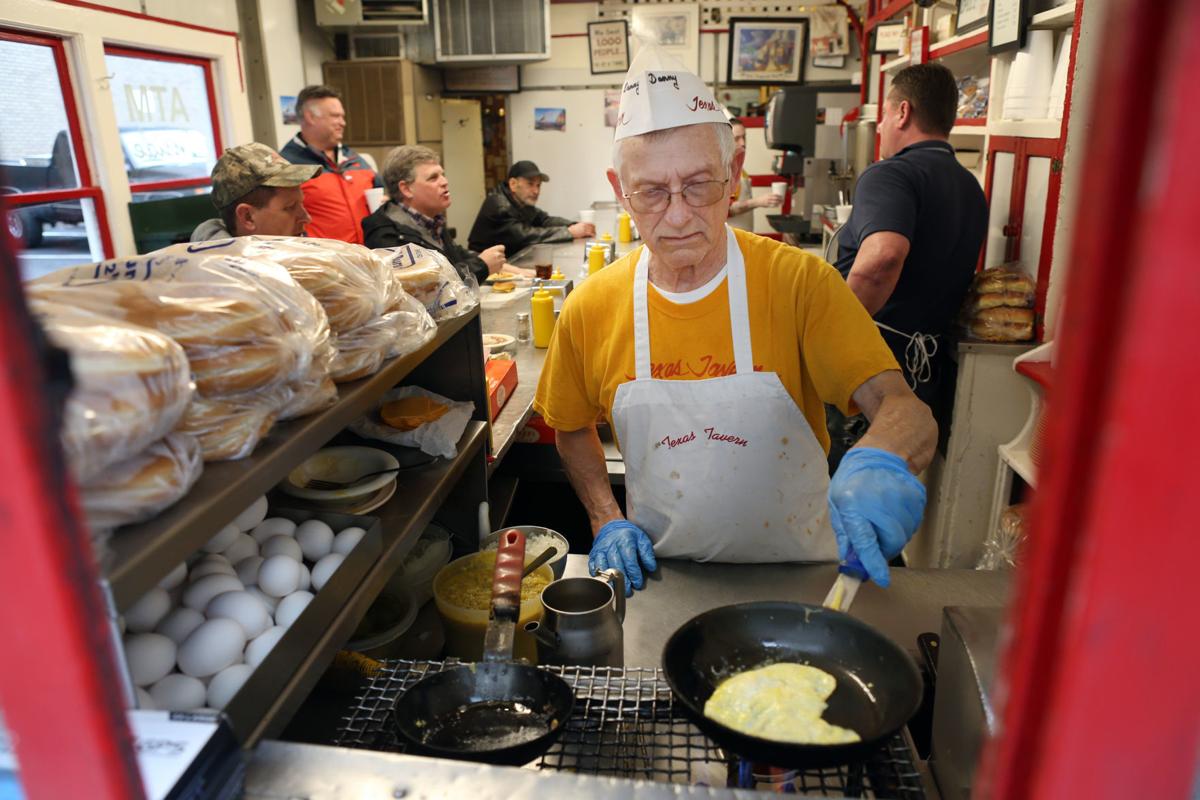 Danny Fralin has worked at Texas Tavern in downtown Roanoke on and off for almost 40 years. He prepares an egg at the grill on Feb. 12, 2020. 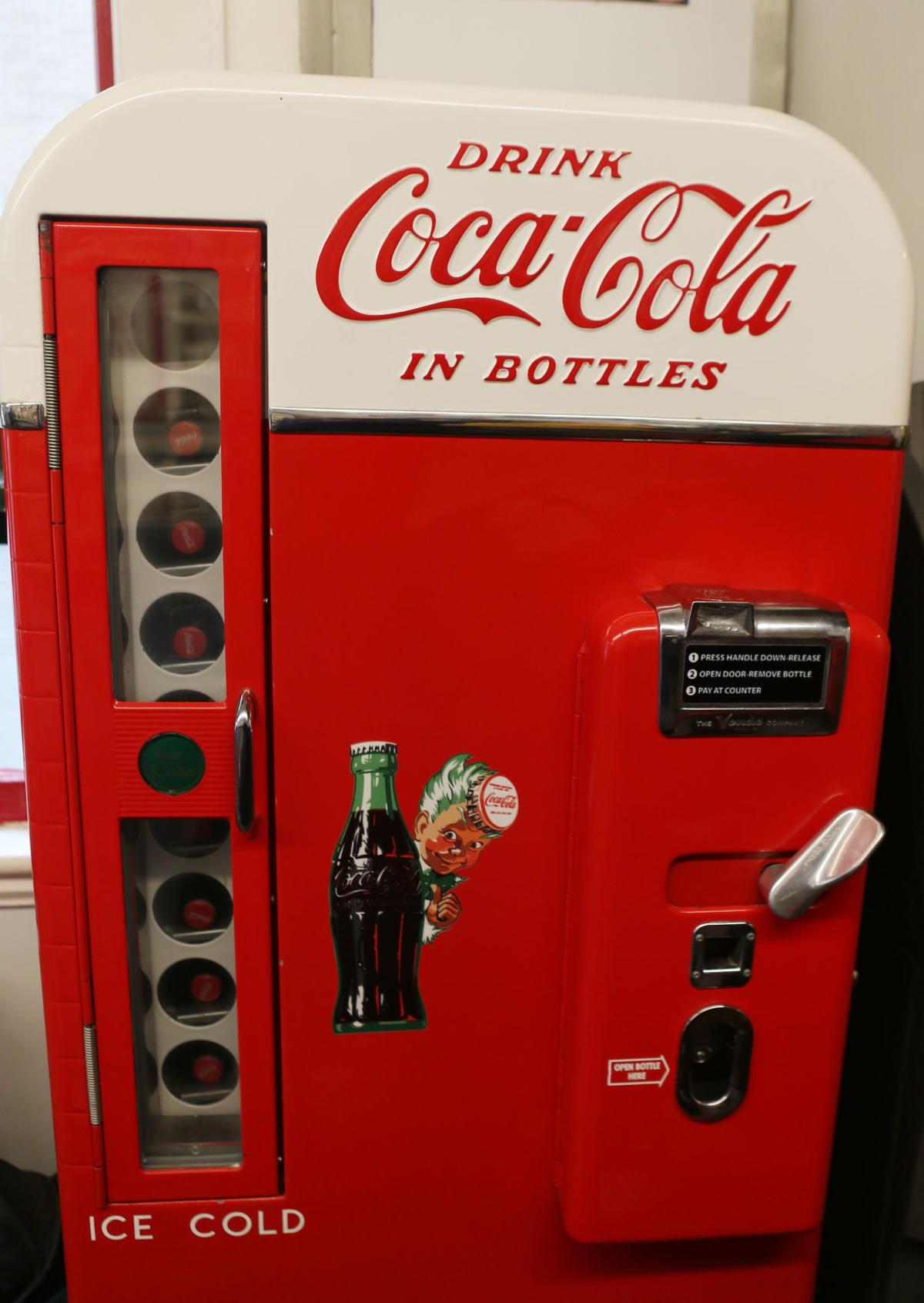 A sign on the front door of Texas Tavern, one of many in the somewhat quirky decor.

Dennis Hayth waits on Texas Tavern diners on Wednesday. The counter is lined with bottles of mustard, but no ketchup. When asked if they serve ketchup, employee Randy Dodd said, “Women and kids under 11 get it for free but if you’re a guy or over 11 you gotta ask for sissy sauce.” Dodd has worked for Texas Tavern since 1994. He said they did not start serving ketchup until 2000 or 2001.

Danny Fralin has worked at Texas Tavern in downtown Roanoke on and off for almost 40 years. He prepares an egg at the grill on Feb. 12, 2020.

A sign on the front door of Texas Tavern, one of many in the somewhat quirky decor.

Each February for the past decade, this column has chronicled the strange, often twisted history of the 10-stool Roanoke eatery known as Texas Tavern. And we’ve raised many improbable questions about the diminutive diner on Church Avenue, which celebrates its 90th anniversary Thursday.

For this birthday column, we’re ditching those hard-to-pin-down historical quandaries in favor of questions about the TT’s future. Owner Matt Bullington has been focused on those for at least the past five years.

Although he’s tight-lipped on the subject, I’ve uncovered evidence that Bullington is hatching some truly mind-blowing expansion plans. It appears he’s intent on making restaurant-industry history by opening a second Texas Tavern — in outer space.

The gist is revealed in NASA documents The Roanoke Times recently obtained under the U.S. Freedom of Misinformation Act. Among thousands of pages the agency turned over was a contract that identifies two parties: ROANOKE RESTAURATEUR and SPACE ENTREPRENEUR.

Though NASA blacked out the signatories’ names at the end, the agency failed to obscure their initials in numerous other locations on the 821-page contract. Those are clearly “MB” and “EM.” And from those it’s not difficult to draw some logical conclusions.

Did Bullington ink a deal with Elon Musk, the developer of Tesla electric cars, to put a Texas Tavern on Mars? Musk, you probably know, also founded SpaceX, the company that intends to create the first human outpost on the red planet.

Last week, as Bullington took me for a spin in his new Tesla Cybertruck, I put that question to him. He was cagey and wouldn’t answer directly — but he hinted it had something to do with the TT’s famous “chile” and its primary ingredient, pinto beans.

“I can confirm that Elon Musk dropped by the TT a couple of times back in 2014,” Bullington said. “He really loved the ‘chile’s’ taste. He also came back the following day, raving about the secondary effects. He said it gave him an idea. Contractually, I’m bound not to reveal anything more.”

Fortunately, the NASA documents do.

According to those, “Space entrepreneur” will establish the first human colony on Mars. Part of it will be a manned outpost on the red planet. The other part will serve as a refueling station for NASA missions.

Naturally, the outpost’s staffers will have to eat. And the refueling station will have to have some kind of energy source — such as the gas methane — which NASA can use for journeys to farther-out planets like Uranus.

It appears that Musk’s idea to put a Texas Tavern on Mars could accomplish both.

According to the documents, “Roanoke restaurateur” will open a 10-seat diner that serves “chile” in the outpost. Beans will be the primary ingredient. And as an adjunct, the restaurant will sport an enormous vat roughly the size of the Berglund Center coliseum.

Besides storing the main ingredient for the diner’s “chile,” the vat’s fermenting legumes will produce thousands of tons of methane per week.

Methane, as you may know, is a greenhouse gas that’s far more potent than carbon dioxide in terms of global warming.

The contract says “Space entrepreneur” plans to first use the gas to establish an atmosphere on Mars and make it more habitable. Once that’s done, he’ll sell the excess methane to NASA as fuel.

“It’s a genius plan,” I told Bullington. “But it’s gonna cost trillions. Where will the money come from? How will Musk transport a vat the size of the Berglund Center to Mars? Good grief, it’s 170 million miles from Earth.”

I found the answer buried deep in the NASA documents. Those suggest “Space entrepreneur” won’t have to move the vat or its pieces to the red planet. Instead, he’ll simply send half-a-dozen large 3D printers.

With the push of a button from an Earth-based computer, the printers will create all the parts needed to assemble the vat. They’ll also print millions of tons of pinto beans that go inside it.

“But what about the beef?” I asked Bullington. “You can’t make ‘chile’ without that. And you can’t print cows on a 3D printer.”

“You can’t — yet,” Bullington replied. “But you know the new Impossible Burger that Burger King’s selling? It’s totally plant-based, and tastes just like the real McCoy. Hypothetically, we could sub that until we create an atmosphere, and get grass growing, and cows grazing.”

“There’s only a thimbleful in each bowl,” Bullington countered. “Hypothetically, I don’t think our customers on Mars will notice the difference.”

I asked if he’d figured out the pricing for Texas Tavern-Mars. Normally on Church Avenue bowls of “chile” go for $1.90.

(But in recognition of the diner’s anniversary, Bullington will cut the price Saturday to 90 cents from 11 a.m. to 4 p.m. The same goes for TT burgers.)

“Are you kidding?” I asked.

“Market pricing,” he replied. “Where else can you get ‘chile’ in space?”

I have to admit, he had me with that one. And though I can’t agree, legions of patrons for years have raved that Texas Tavern “chile” is out of this world.

Looks like one day soon it may finally live up to that bill.