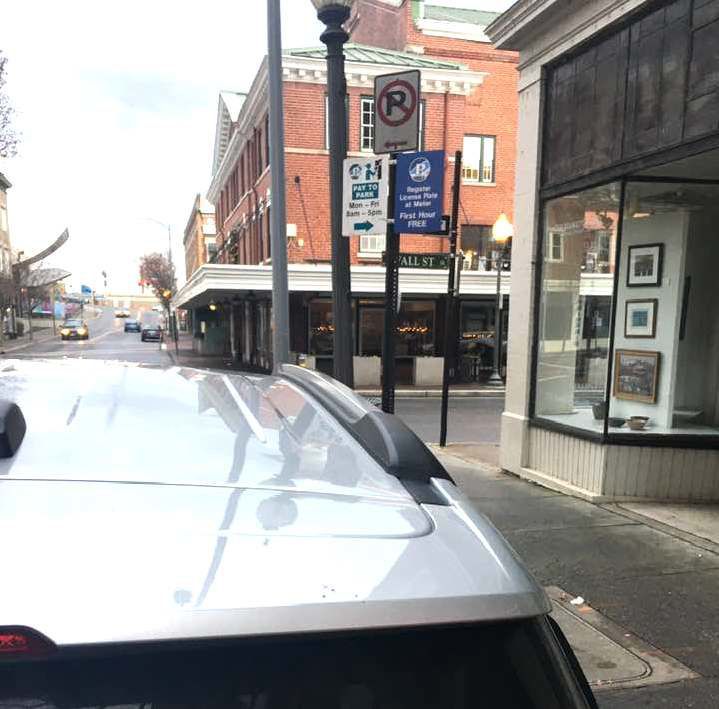 The sign at the intersection of Salem Avenue and Wall Street in downtown Roanoke that seems to indicate drivers should register their car at a parking meter-kiosk on Wall Street. Dave Tate of Salem was ticketed $10 after parking on Salem and following the arrow to a kiosk on Wall, where he registered the car. Park Roanoke told Tate the signs is pointing to another kiosk on Salem Avenue. At best it's "very ambiguous," Tate complained. His ticket was waived. 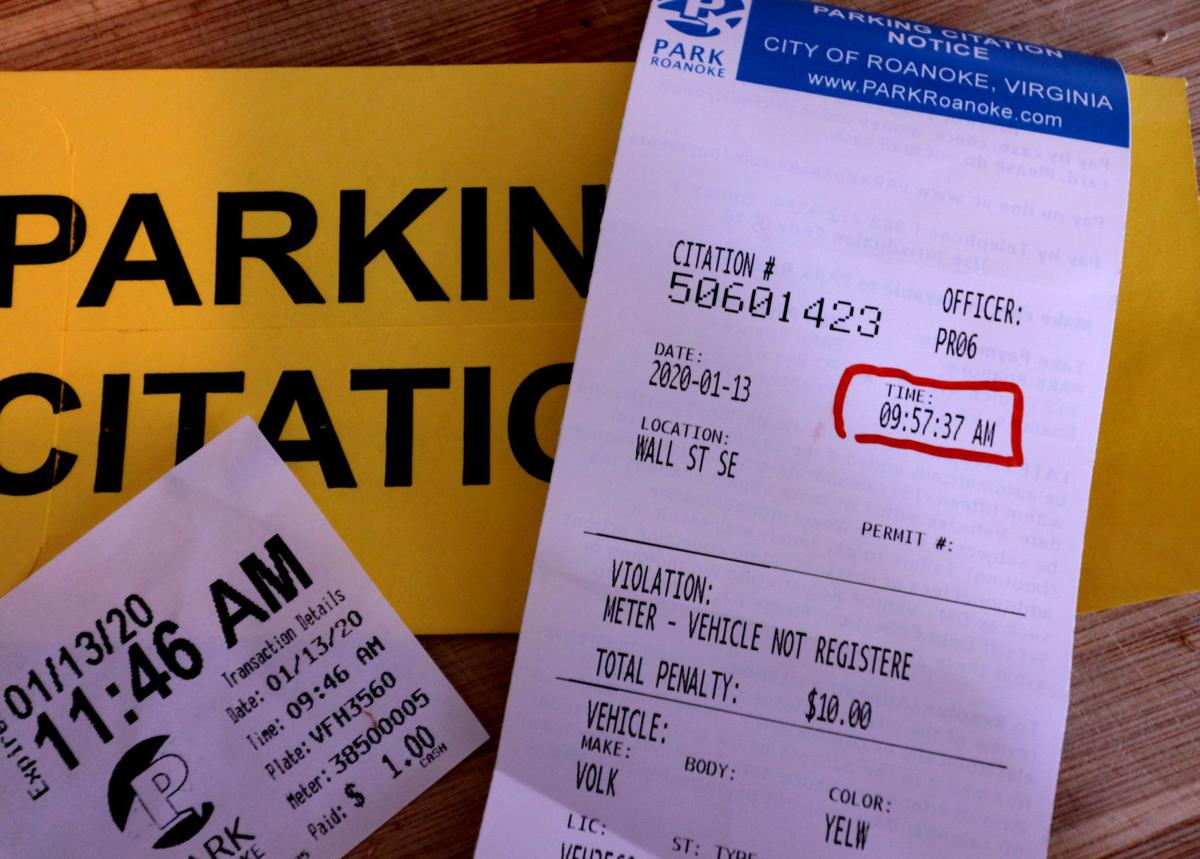 Dan Smith of Roanoke was ticketed Jan. 13 after parking his car on Wall Street in downtown Roanoke. He'd paid for an hour of parking but entered his tag number incorrectly, so he was hit with a $10 fine 11 minutes after he left his car.

The sign at the intersection of Salem Avenue and Wall Street in downtown Roanoke that seems to indicate drivers should register their car at a parking meter-kiosk on Wall Street. Dave Tate of Salem was ticketed $10 after parking on Salem and following the arrow to a kiosk on Wall, where he registered the car. Park Roanoke told Tate the signs is pointing to another kiosk on Salem Avenue. At best it's "very ambiguous," Tate complained. His ticket was waived.

Dan Smith of Roanoke was ticketed Jan. 13 after parking his car on Wall Street in downtown Roanoke. He'd paid for an hour of parking but entered his tag number incorrectly, so he was hit with a $10 fine 11 minutes after he left his car.

If you’re familiar with downtown Roanoke’s pay-for-parking system, you’re probably aware the first hour is free. However, that’s true only if you properly register your car at one of those kiosk meters. It’s not necessarily as easy as it appears.

This we know courtesy of two readers and their recent parking misadventures. Both ended up with $10 tickets, although they tried to comply.

One guy got his ticket waived after some phone calls and emails. The other is still pondering what to do. Let’s take them in chronological order.

First up is Dave Tate of Salem. On Christmas Eve, Tate was heading eastbound on Salem Avenue toward Williamson Road, in a dealership loaner car because his wheels were in the shop.

He found an empty parking space on Salem near The Quarter restaurant. That’s just before you get to Wall Street, where the Roanoke City Market Building stands. Tate parked at 11:54 a.m.

At the corner of Salem and Wall, almost within spitting distance of the car, Tate spied a sign pointing to a kiosk meter. It seemed to indicate the thing was on Wall Street. So Tate walked around the corner to Wall Street and dutifully entered the license tag number.

Less than an hour later, he returned. Even before he got to the car, Tate saw the ticket on the windshield. The time on it was 12:44 p.m. — which means the ticket was issued 50 minutes after Tate registered for his free hour. The $10 citation indicated the vehicle was “NOT REGISTERED.” What gives?

On. Dec. 30, Tate emailed Park Roanoke, the independent company that monitors downtown street parking under contract with the city. He had registered, his complaint noted. Park Roanoke responded Jan. 3.

“The meters monitor zones — each street is part of a zone, so you must register at the meter on the street in which your vehicle is parked on. Regarding the arrow on the sign — it is not pointing towards Wall Street, but down Salem, where the correct meter is located. All signs are placed at angles so they may be read from the street.”

The response also noted, “the citation has been waived as a one-time courtesy.”

Tate disputes Park Roanoke’s contention as to where that sign pointed, and he sent me a photo of it.

“It’s very ambiguous,” Tate told me. After looking at the picture, it’s hard to disagree.

“The arrow is pointing due south,” Tate said, which is straight down Wall Street, toward the kiosk at which he registered.

“My license plate was in their system, it just wasn’t in the zone they said it had to be [registered] in,” Tate noted.

Park Roanoke needs to get the word out that drivers must register at a kiosk on the same street on they’ve parked on, Tate said. Perhaps this will help.

It won’t help much for tourists, however, which is another of Tate’s concerns. Park Roanoke, he added, ought to more clearly outline its zones — perhaps on the kiosks. The day he got the ticket, Tate felt “this is the Twilight Zone,” he added.

He got another dose of the Twilight Zone a few weeks later. Recall, the ticketed car is owned by a local auto dealer. Despite Park Roanoke’s written promise to waive the citation, the company mailed a parking violation notice to the dealer. And — bonus — it was a late notice.

The dealer contacted Tate and said, “You got a $10 ticket, and didn’t pay, and now it’s $25,” Tate recalled. He called Park Roanoke. He said an employee chalked it up to a “clerical error” and canceled the fine, Tate said.

Our next parking scofflaw is Dan Smith of Roanoke. His misadventure happened in almost the same place as Tate’s — on Wall Street Southeast.

On Jan. 13 at 9:46 a.m., Smith parked his car. Because he wasn’t sure if he’d be back by the time his free hour was up, Smith paid $1 when he registered at the Wall Street kiosk. It spit out a receipt noting Smith was good to park until 11:46 a.m. Smith put that on his car’s black dashboard, on the driver’s side.

When he returned, Smith found a citation issued at 9:57 a.m., 11 minutes after he parked. The ticket was on his driver’s side windshield, directly above the parking receipt on Smith’s dash.

That violation also indicated “NOT REGISTERED.” Smith couldn’t figure out why. He complained to Councilwoman Patricia White-Boyd. And he wrote a Facebook post about it, too.

It garnered 35 replies, including a bunch from people who wrote things like “This is why I avoid downtown at all costs,” and reminders that on-street parking is still free in Salem. Others shared similar parking-ticket woes. One person termed the Park Roanoke meter attendants “pirates.”

When White-Boyd looked into Smith’s complaint, she discovered he committed a typo when registering his license tag at the kiosk. For one of the digits, Smith mistakenly entered a zero instead of a 9. Technically, at least, his tag was unregistered.

Smith still can’t fathom why the meter attendant didn’t see the parking receipt on his dash. He sounded unsure whether he would fight the ticket.

But “this ticket is not about Dan Smith and a $10 fine. It is about a parking situation downtown that is confusing, complex and ripe for mistakes from the person parking and the person ticketing,” Smith told me.

“For many years, we had a simple way of keeping people from overparking that required no meters, no typing, no credit cards or ready cash. It was run by the city — not jobbed out to a for-profit company — as it should be.

“The current system discourages rolling the dice and parking downtown, chancing a ticket. That means avoiding downtown. Every time I go downtown for as long as we have this system, I will have to wonder if I made a $10 or $20 mistake and, frankly, I can go to one of the malls and not have to be concerned.

“I love downtown. But I don’t love traffic tickets.”

I called Park Roanoke on Monday and left a voicemail message. They didn’t get back to me by deadline — I suspect they were closed for the holiday.

White-Boyd said she personally has not heard “a ton” of complaints, but she’s willing to listen to any others. She wants to ensure the city gets downtown parking right.

“If there’s a problem, we certainly don’t want to hinder visitors,” she told me. “We have to make sure that people understand how the kiosks work. ... We do not want to discourage people from coming downtown.”