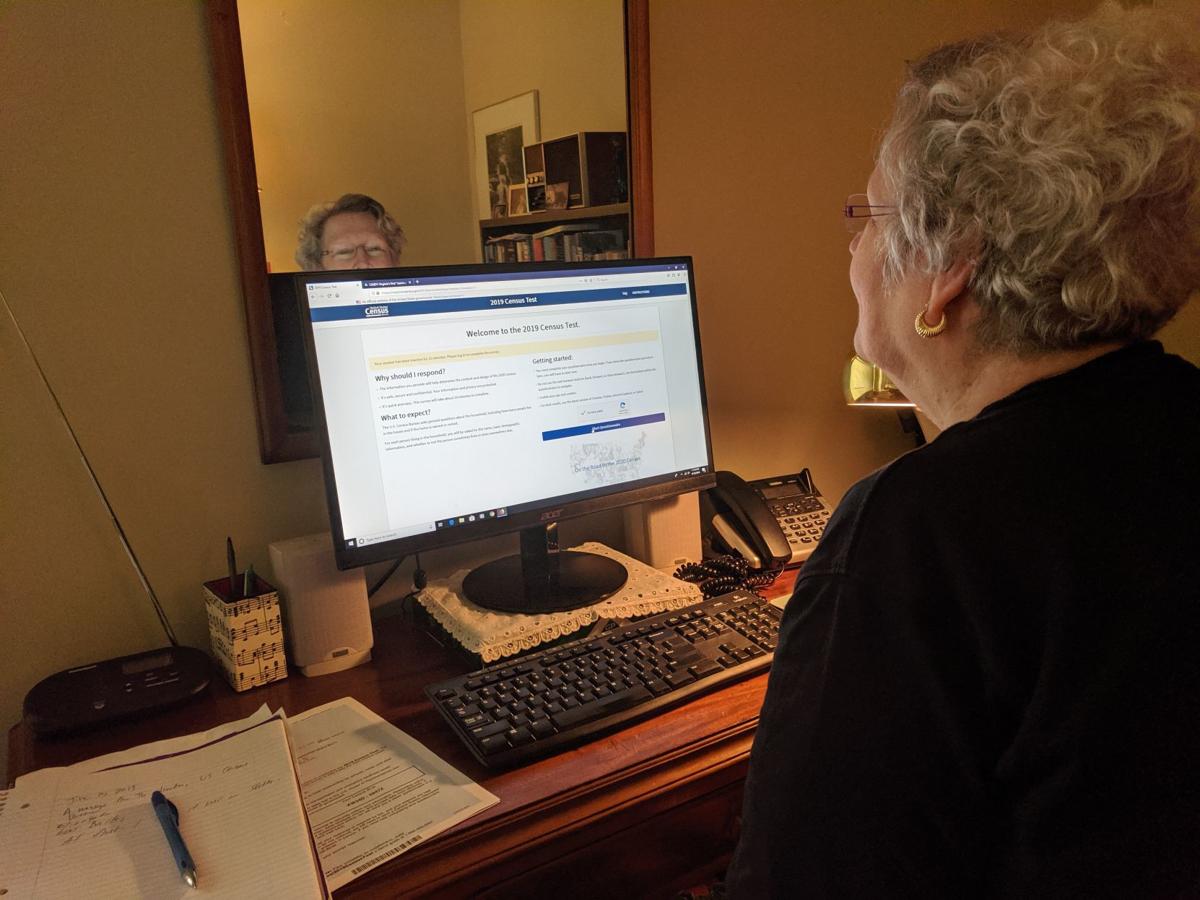 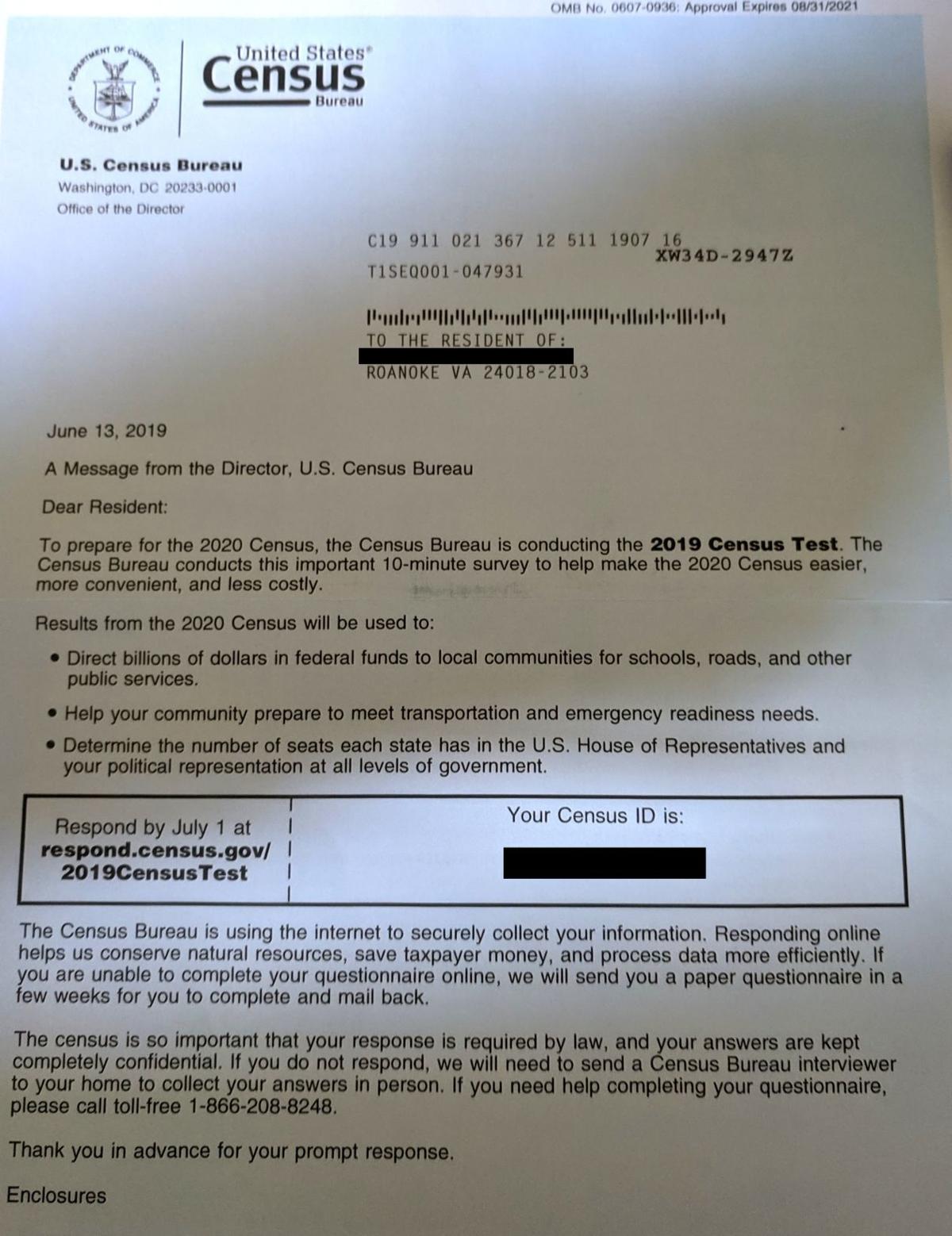 The letter from the U.S. Census Bureau that Elizabeth Bailes and Grant Smith received this month, warning their answers are "required by law." 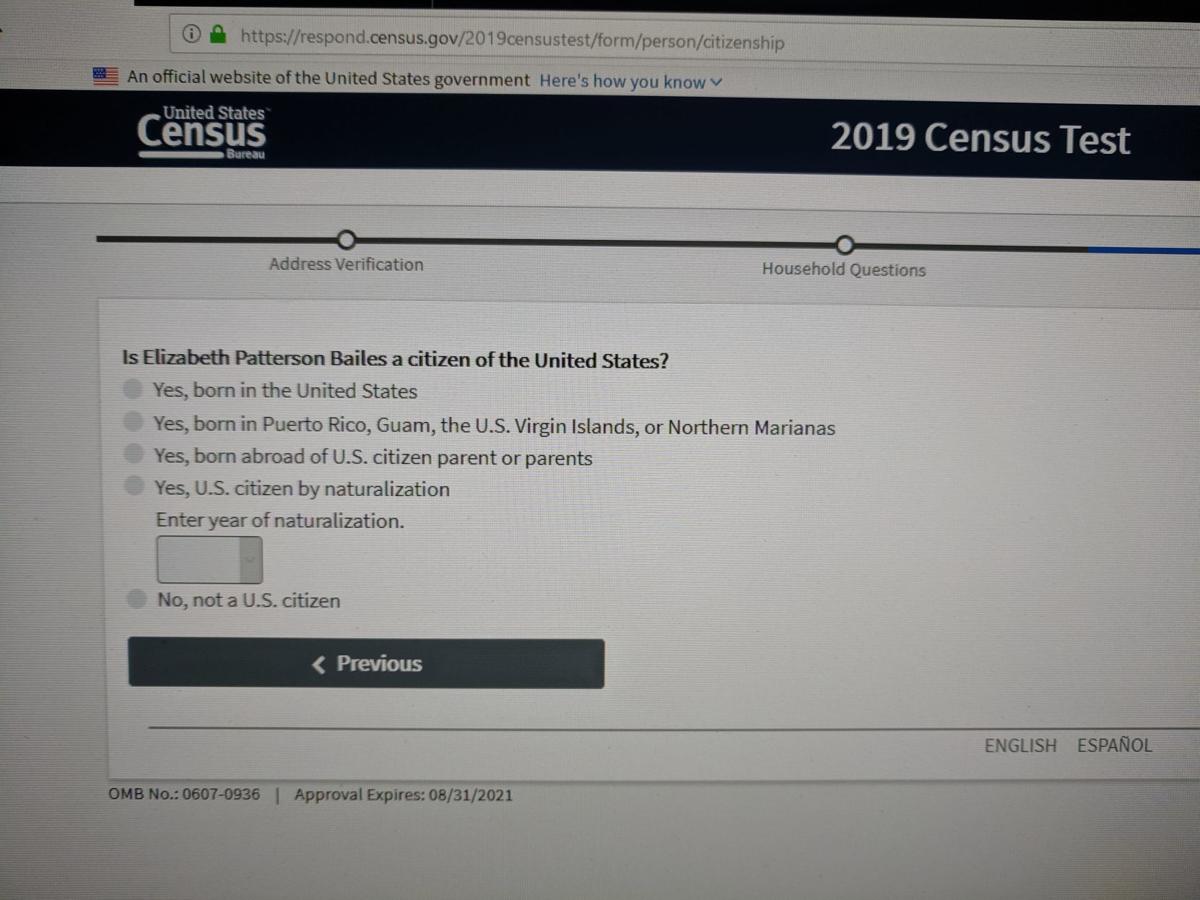 The question, proposed by the Trump administration for the 2020 U.S. Census, that has caused so much controversy. Critics fear it will discourage noncitizens from answering the 2020 Census, and that will lead to an undercount. Thursday, the U.S. Supreme Court blocked its inclusion on next year's survey.

The letter from the U.S. Census Bureau that Elizabeth Bailes and Grant Smith received this month, warning their answers are "required by law."

The question, proposed by the Trump administration for the 2020 U.S. Census, that has caused so much controversy. Critics fear it will discourage noncitizens from answering the 2020 Census, and that will lead to an undercount. Thursday, the U.S. Supreme Court blocked its inclusion on next year's survey.

You may be aware of a current uproar over a certain question regarding citizenship on the 2020 U.S Census. The Trump administration has proposed asking the question of every U.S. household, something the U.S. Census Bureau hasn’t done since 1950. It remains a subject of hot dispute in the federal courts.

But you may not know that the Census Bureau already is asking that question. I didn’t, until last week when I visited the home Elizabeth Bailes and Grant Smith. The married seniors live in the Deyerle neighborhood, in Roanoke’s southwest quadrant.

The couple are among 480,000 recipients nationwide of something known as the 2019 Census Test. That went out as a letter from the Census Bureau earlier this month. Each letter lists a personalized code and directs recipients to a website that poses 20 questions.

Bailes and Smith have grave concerns about some of those. Tuesday morning, they invited me over and walked me through the online question-and-answer process.

One of the questions asked if their home was mortgaged. Another, whether they were a same-sex or opposite-sex couple. Their biggest gripe was about the citizenship question. The online survey queried each of them on that.

“Is Elizabeth Patterson Bailes a citizen of the United States?” It asked. The computer screen listed five possible answers:

Accompanying the letter was another page titled “FREQUENTLY ASKED QUESTIONS.” One of those is, “Am I required to respond?” Here’s the Census Bureau’s answer: “Yes, you are required by law to respond to this survey,” and it quotes a section of federal law.

The letter itself notes, “If you do not respond, we will need to send a Census Bureau interviewer to your home to collect your answers in person.”

What difference does it make if you’re a U.S. citizen born in Guam, rather than Kansas? Or if your mom was an American soldier who gave birth on a military base in Korea? Does the government need to know if you’re a citizen at all?

Those were among the questions I had when I contacted the Census Bureau. Here’s another: Would anything happen to Bailes and Smith if they chucked the letter in the trash and later slammed their door on a Census interviewer who showed up at their house? Could they be arrested? Fined?

But when Census Bureau spokesman Dan Velez answered the phone Thursday, he cut me off before I could ask any of them.

“We’re not answering questions about the 2019 Test,” Velez said.

Instead, he emailed me a four-paragraph statement that offered little information, plus two additional links. One was an electronic version of the paper FAQ mailed to Bailes and Smith.

Neither of the linked pages addressed the questions above. Nor did those links specifically explain why the bureau is asking the citizenship question in 2019. But a June 11 news release did.

According to that, the bureau is testing the citizenship question now in an effort to predict how many door-knockers it will need to hire in 2020 to personally visit homes of Census responders who refuse to answer the question.

That’s if, of course, this question ever appears on the 2020 Census. It’s a central issue in at least three court current court cases, one of which is before the U.S. Supreme Court.

Bailes said it amounts to putting the cart before the horse. “The citizenship question bothers me because the jury is out on that,” she told me.

More than two dozen states and cities have sued the U.S. Department of Commerce (of which the Census Bureau is a part) to remove the question from the 2020 Census. In the process, plaintiffs have learned Commerce Secretary Wilbur Ross insisted on adding it against the recommendations of the Census Bureau.

The issue’s important because the Census counts population, and those numbers are used in a once-per-decade process of redrawing congressional district boundaries to roughly equal populations. Those populations are a mix of citizens and noncitizens, and the proportions vary widely.

Opponents of the question are concerned it will discourage noncitizens from answering the Census, and that that will undercount population in areas that have higher concentrations of noncitizens. That in turn could affect lines drawn for future congressional district boundaries.

In addition, opponents to the question argue the intent behind it is discriminatory. If that was true, the question would be illegal. The Trump administration denies any such intent. It has invoked executive privilege to avoid turning over to Congress some documents regarding the question.

“Inclusion of a citizenship question on the 2020 decennial census will provide more complete information for those who respond,” Ross wrote in a 2018 memo.

Among opponents to the question are Virginia’s two U.S. senators, Tim Kaine and Mark Warner, both Democrats.

“Our office has heard from a number of constituents who oppose the administration’s efforts to politically manipulate the census and invoke executive privilege over the documents related to this question,” said Warner spokeswoman Nelly Decker.

Kaine’s office issued this statement from the senator: “We should not use the census as an ideological tool to intimidate immigrants and reduce Virginia’s share of federal dollars.”

In the past week, some eye-popping new evidence has arisen regarding the citizenship question. It’s thousands of electronic files from a now-deceased Republican gerrymandering guru named Thomas Hofeller. Formerly, he was the Republican National Committee’s redistricting director.

Hofeller’s’ records were unearthed by his daughter and handed over to lawyers representing opponents of the question. The files suggest he helped develop the rationale the Trump administration used to justify it. Three courts already have ruled that rationale a pretext.

In addition, those files disclosed that Hofeller authored a 2015 study that concluded adding a citizenship question would discourage noncitizens from answering, which would ultimately benefit “Republicans and non-Hispanic whites” in future congressional redistricting.

That seems like powerful evidence the question was adopted with discriminatory intent, and may be part of an attempt to rig a GOP advantage for future congressional elections. Whether the courts will ultimately rule that way remains to be seen.

And what about Bailes and Smith? They haven’t completed the online survey — and won’t. Bailes told me the Census Bureau’s next step will be to mail them a paper version of the 2019 Census Test. At that point, the couple will answer some of the questions, leave others blank and mail it in, she said.

They’re unsure what will happen after that.