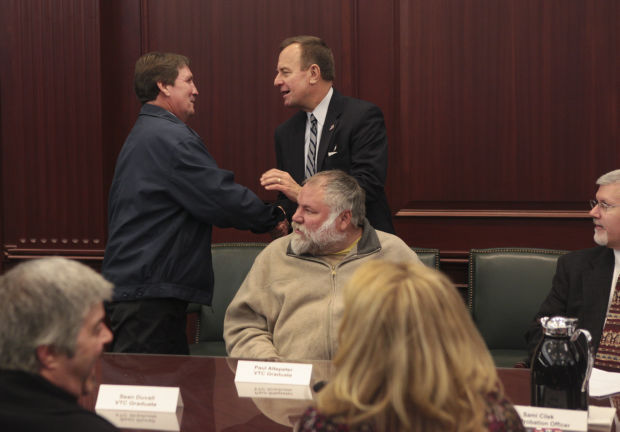 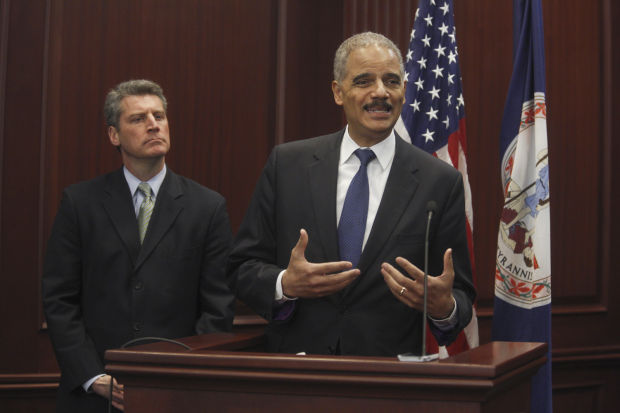 U.S. Attorney General Eric Holder and Tim Heaphy, U.S. attorney for the Western District of Virginia, take questions from the media after Holder’s visit in Roanoke on Thursday. 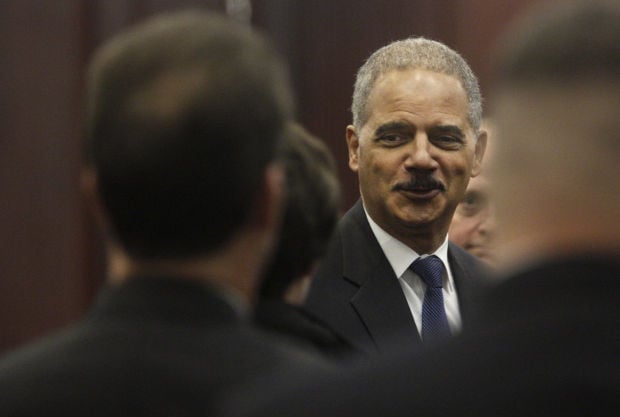 U.S. Attorney General Eric Holder greets people in the gallery of the U.S. District Court for the Western District of Virginia on Thursday after delivering remarks on the Veterans Treatment Court and the Justice Department’s “Smart on Crime” initiative.

U.S. Attorney General Eric Holder and Tim Heaphy, U.S. attorney for the Western District of Virginia, take questions from the media after Holder’s visit in Roanoke on Thursday.

U.S. Attorney General Eric Holder greets people in the gallery of the U.S. District Court for the Western District of Virginia on Thursday after delivering remarks on the Veterans Treatment Court and the Justice Department’s “Smart on Crime” initiative.

(Jan. 24, 2014: 9:01 a.m.): The man pictured shaking Veterans Treatment Court graduate Ronald Taucher is Michael Urbanski. He was misidentified in a previous version of the cutline.

U.S. Attorney General Eric Holder wasn’t speaking theoretically, or merely from the esteemed Cabinet position he occupies, when on Thursday he praised a Roanoke federal court program for veterans who struggle to rejoin civil society and get in trouble with the law.

Holder had a cousin who, after serving in the U.S. armed forces during the Vietnam War, returned home a different and troubled man. Holder said his cousin needed the kind of support that Veterans Treatment Courts provide, but never got it. He died in his early 60s.

His point, a strong endorsement of Veterans Treatment Courts, resonated with a roomful of judges, prosecutors, defense lawyers, probation officers, court personnel and staffers from the Veterans Affairs Medical Center in Salem who as a team operate the local diversion court. Holder spent most of the morning with justice system and program personnel and several veterans in a courtroom at the Poff Federal Building before flying out of Roanoke-Blacksburg Regional Airport to an engagement in Charlottesville.

“This is at the core of what we want to do at the Justice Department,” Holder said, citing an ongoing policy message he calls “Smart on Crime.” That 6-month-old initiative is a package of steps to bolster crime prevention and reserve prosecution for society’s worst problems. Being tough on crime is good, he said, but being smart is better.

The U.S. District Court in Roanoke began its Veterans Treatment Court in spring 2011 when only one other existed at the federal level, in Utah. The program has since enrolled 16 people. Seven have graduated, while nine have been discharged for stepping out of line.

The program takes qualifying and interested veterans at the point they incur a petty offense charge on federal land, often at the Salem medical center, and steers them toward help. As long as the veterans take advantage of treatment and support services aimed at erasing the root of their troubles, and stay accountable to a probation officer and judge, they are rewarded with dismissal of the charge.

Just to ensure that no one suspects the program supplies a get-out-of-jail-free card, Judge Michael Urbanski, credited with instigating the court, clarified that the stipulations placed on veterans are significant.

“The program is not easy,” he said, adding that for some it is harder than jail.

It produces more lasting results than jail, too, said Miguel LaPuz, who directs the Salem veterans hospital and outpatient center.

“We have to do a lot more than just lock people up,” said Tim Heaphy, the U.S. attorney for the Western District of Virginia.

While rare in the federal court system, Veterans Treatment Courts are comparatively common at the state-court level. Pennsylvania operates 16 out of a nationwide total of 131, according to the National Association of Drug Court Professionals.

Virginia state courts operate none. It would take an act of the General Assembly to change that.

During his time in the courthouse, Holder was unable to observe an actual proceeding in which participating veterans discuss their progress each month in open court, because no veteran is currently active in the Roanoke program. The program is open to new entrants, and officials on Thursday conceptually endorsed opening it to higher-level offenders, even veterans charged with felonies.

Holder said his cousin, whom he didn’t name, was like a big brother. After the war, Holder knew he was troubled, though his cousin never spoke of his pains. Instead, Holder said, he “self-medicated.”

After a period of physical deterioration, the cousin perished “as a result of what happened to him when he got back” from the war, according to Holder, who did not give a cause of death or the circumstances.

Holder said he can’t help but think that if his cousin had gotten caught by police for the things he was doing, and if a veterans court had existed in Atlantic City, N.J., where he lived, it could have turned out differently.

“I think he might still be alive today,” Holder said.

Before leaving town, Holder fielded questions on several unrelated issues. He said he would advise experts helping formulate drone policy at the Federal Aviation Administration, some of whom are based at Virginia Tech, balance use of such technology in law enforcement and other areas with considerations of personal privacy and the rights of individuals to go about their lives “unencumbered.”

Regarding criticism from Republicans and others that federal prosecutors brought improper charges this week against ex-Gov. Bob McDonnell, Holder said he would urge people to read the indictment and judge for themselves.

“I reject the notion that this is overreaching on the part of the government,” he said.