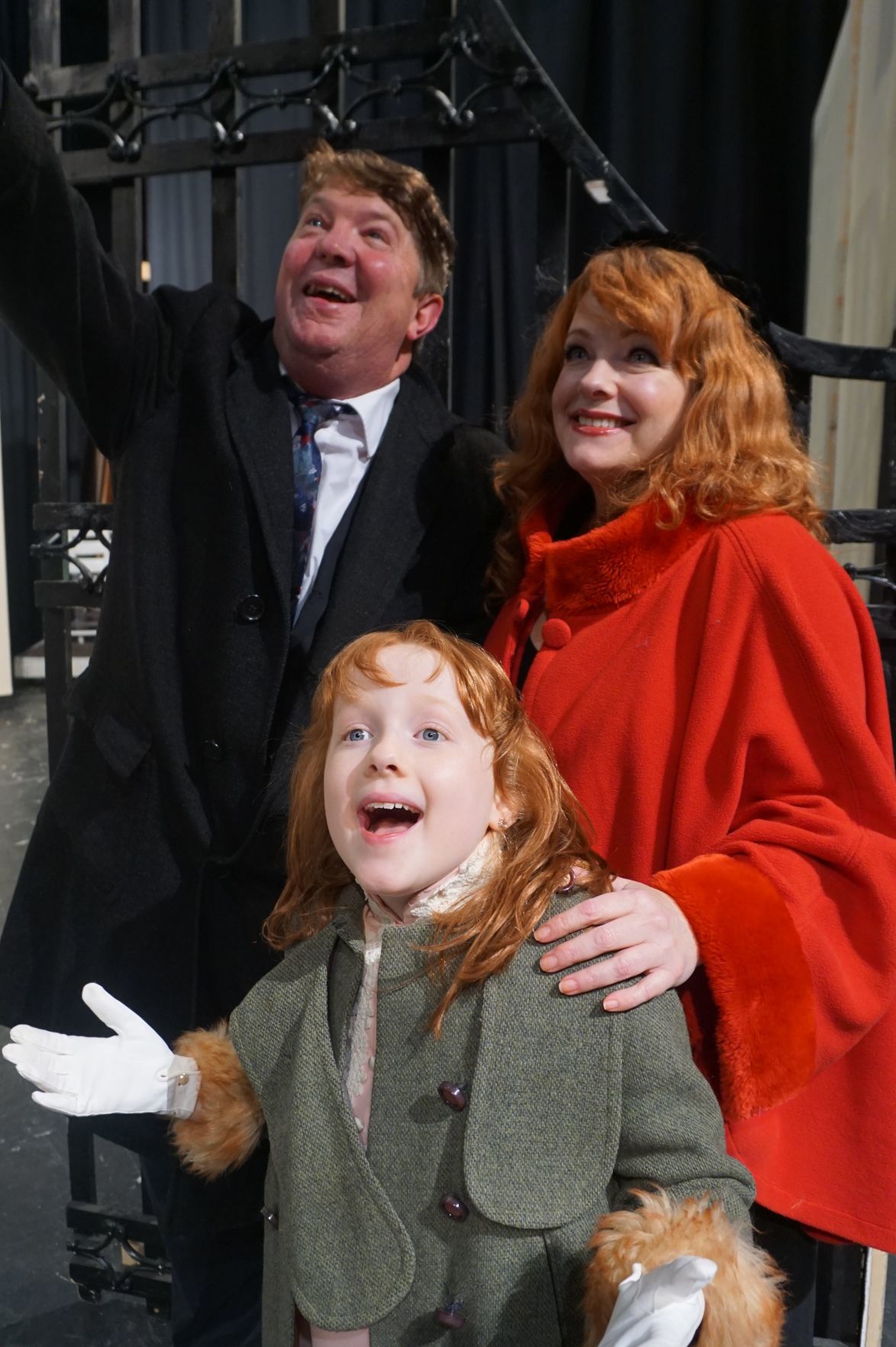 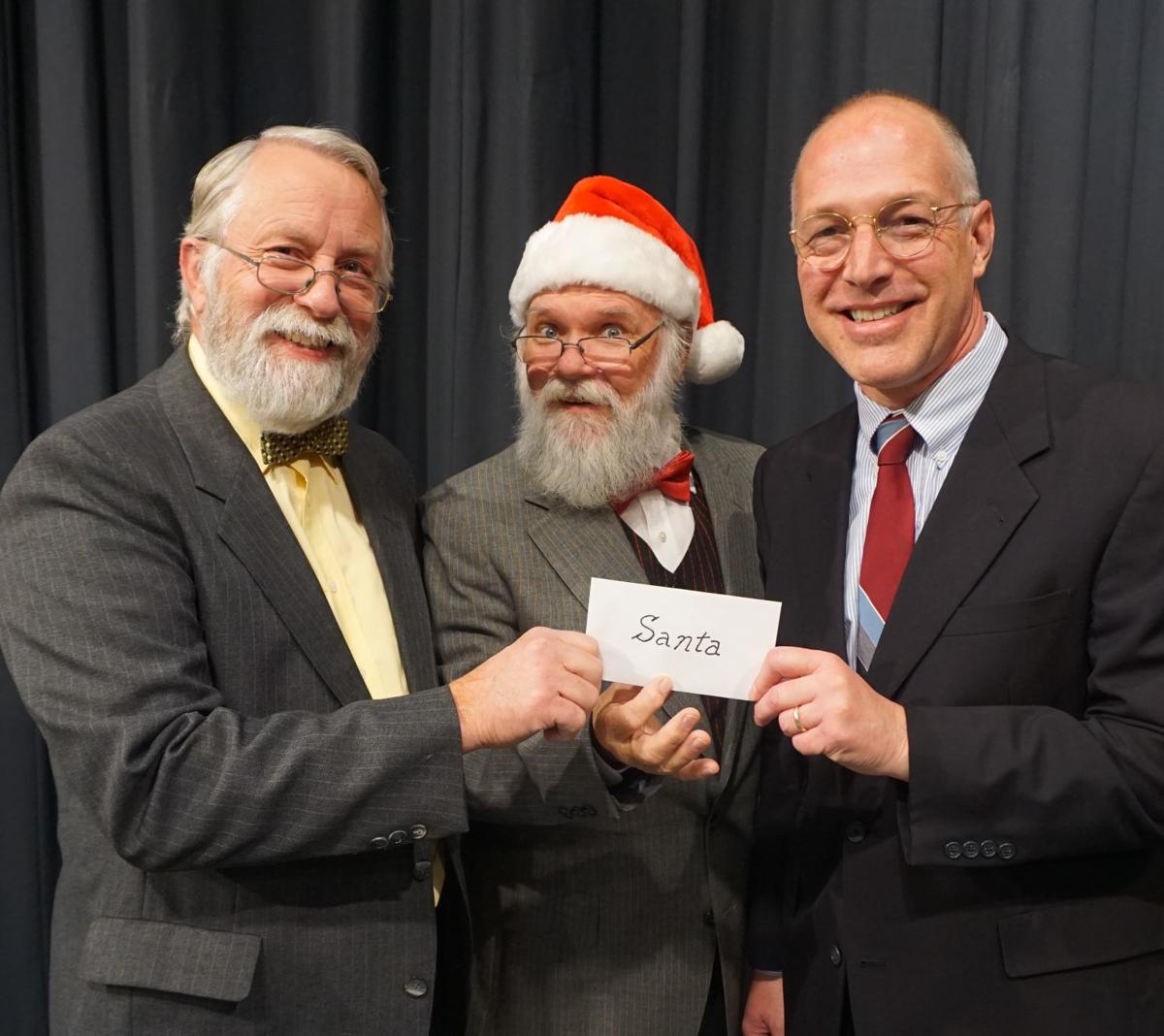 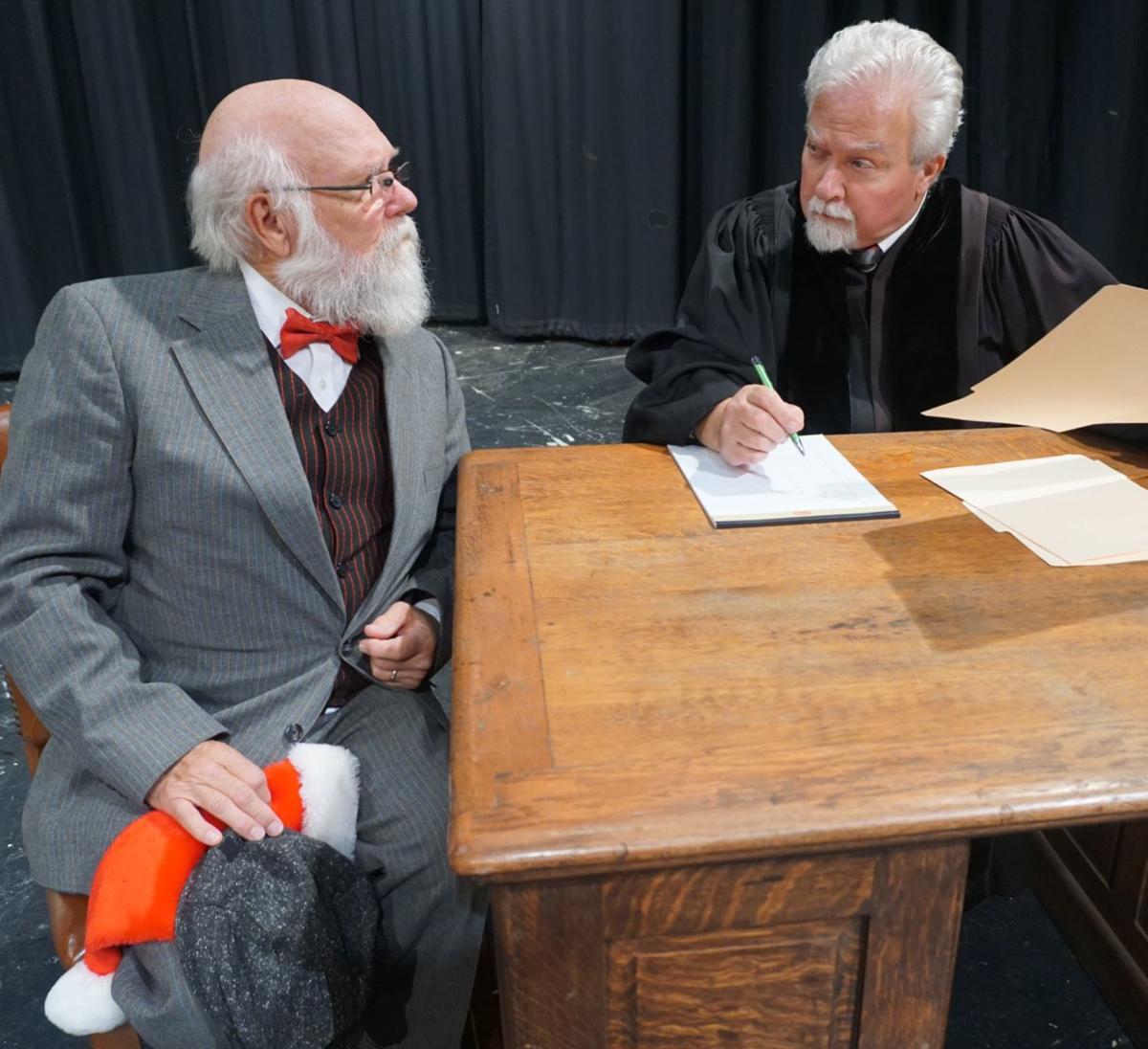 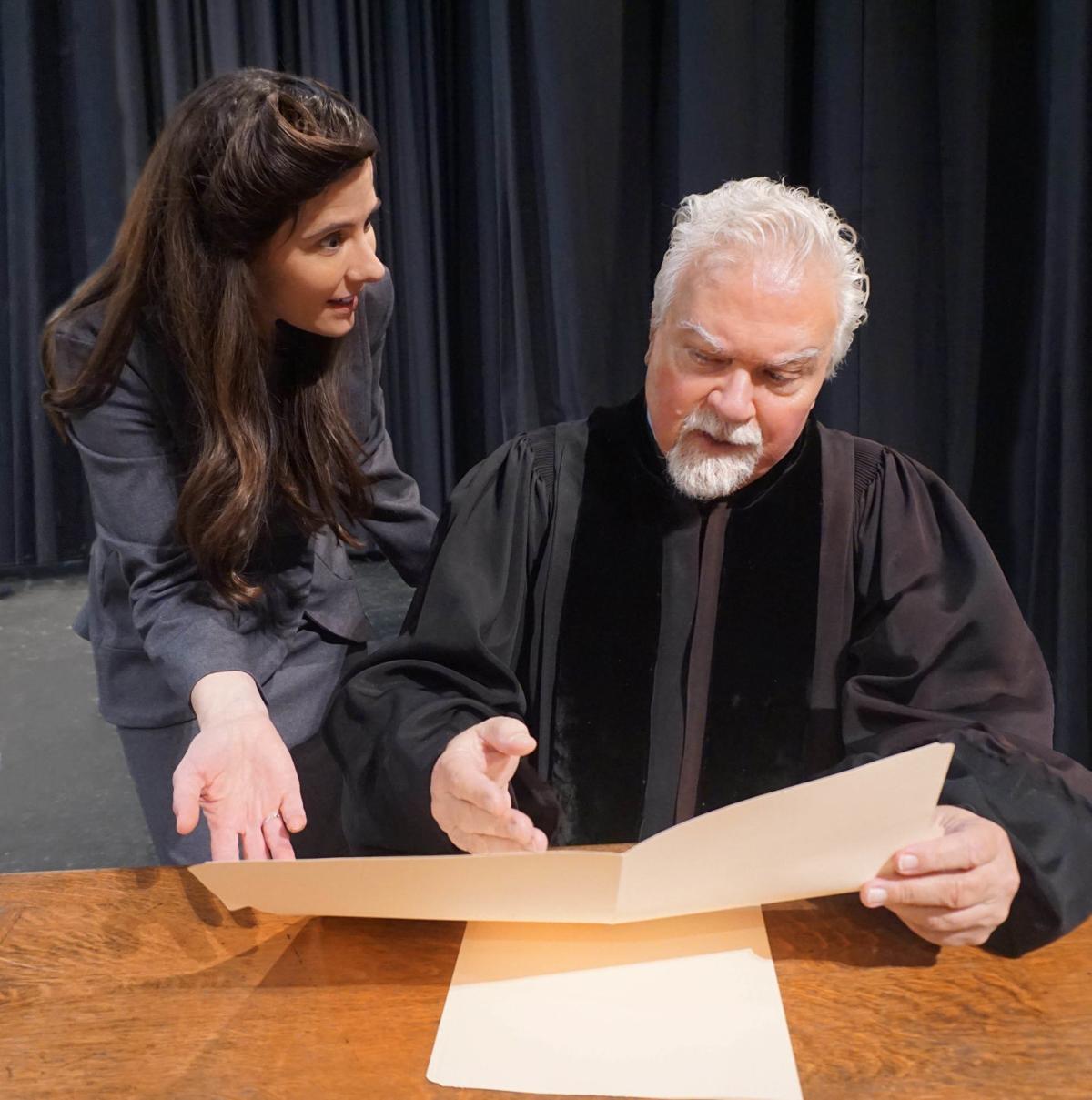 Teresa Killen as Mrs. Mara, the prosecutor, and Wyatt Ewell as the judge 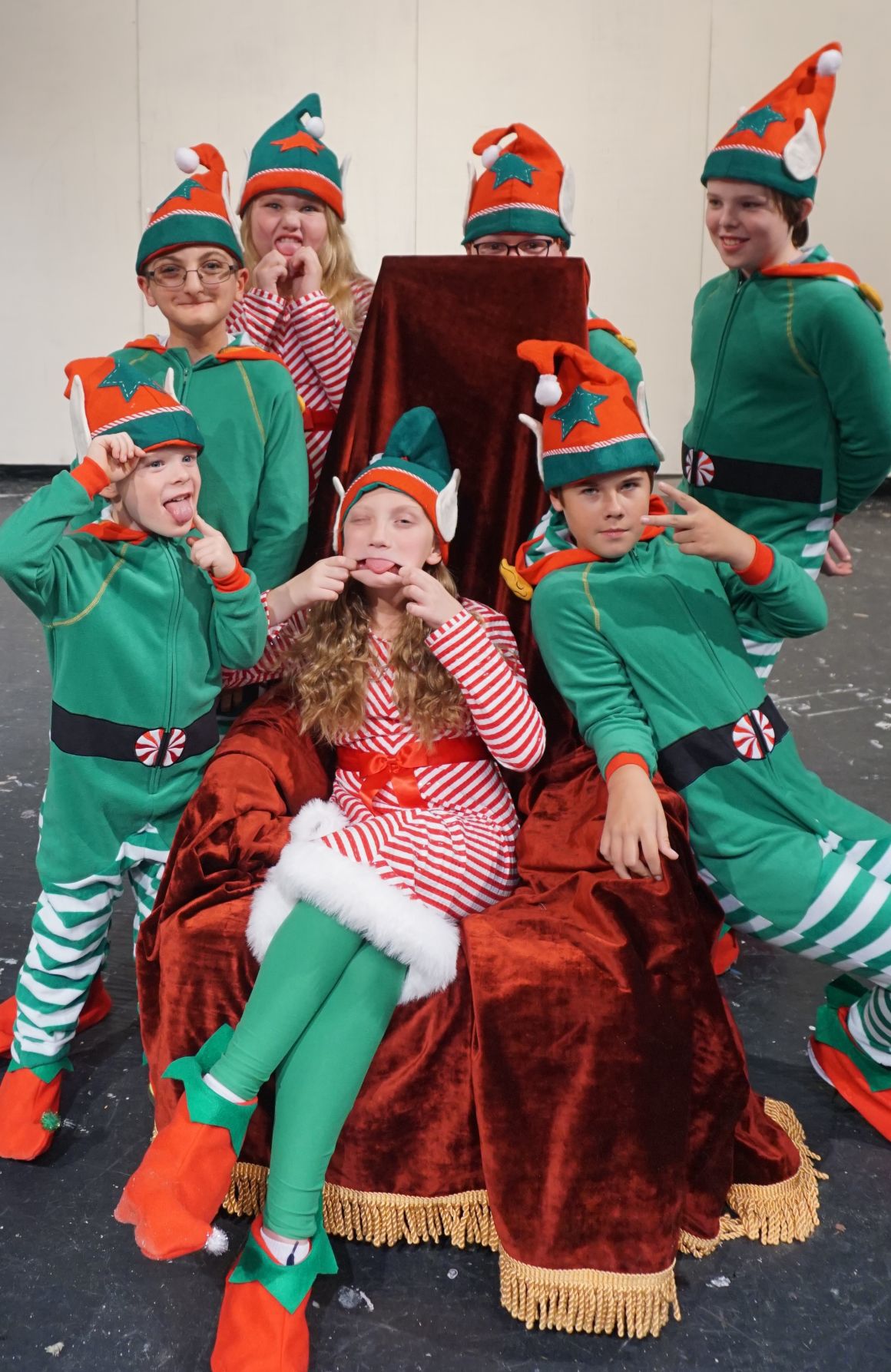 Teresa Killen as Mrs. Mara, the prosecutor, and Wyatt Ewell as the judge

Attic Productions salutes the holiday season with “Miracle on 34th Street,” the classic exploration of one of mankind’s most persistent mysteries: Is Santa Claus for real, as fervently believed by countless millions of children? Or is he a myth perpetuated by generations of well-meaning adults?

“Miracle on 34th Street” began as a story by Valentine Davies. The famed 1947 screen version, starring Maureen O’Hara and Roanoke’s own John Payne, put an Oscar on Davies’ shelf. Davies died in 1961.

The movie is the “Miracle” most Americans know. However, it was adapted for the stage by California’s Mountain Community Theater in the early ’80s. That is the version playing through this weekend at Attic’s D. Geraldine Lawson Performing Arts Center near Fincastle. It’s said to hew closely to the movie script.

But enough with the Googling.

But there’s a catch. Kringle insists he’s the one and only, real Santa. The jolly old elf with a flying sled and airborne reindeers, a cozy place at the North Pole and a “Ho, ho, ho” for all. The Clement Moore Santa.

Macy officials reactions’ range from skepticism to outright horror. They fear that the old chap will poison children’s minds with goodness, making them unfit to survive in the real world.

Doris Walker (played by Carolan Deacon), apparently Macy’s vice president of Santas, is one of them. But her daughter Susan (Beahlan Deacon) softens toward the old man and influences her mom to do the same.

Long story short, the case ends up in court, where a judge (Wyatt Ewell) must decide whether Kringle is Santa or just a delusional senior who needs to be stowed in an institution for his own good.

Except for a relentlessly languid pace, Fincastle’s 24-year-old amateur theater makes a respectable job of “Miracle.” The show’s two acts are broken into multiple, mostly brief vignettes that total a bit over two hours. James Honaker directs the cast of more than 25 including adults and a gaggle of child elves.

Despite a mystery accent — perhaps North Polese? — Bobby Guill makes a lively and likable Kringle. Carolan Deacon stands out as Doris, and her real-life daughter, Beahlen, plays Susan. Steven Aaron, who seems to pop up in every Attic show, has a strong outing as lawyer Fred Gayley, neighbor of Doris and defender of the story’s Santa claimant. Kathy Boyer is impressively mean as Kringle’s most ardent detractor.

“Miracle on 34th Street” seems to be the only Christmas play on area community theater stages this year, so Attic is the place to go if that’s your thing.