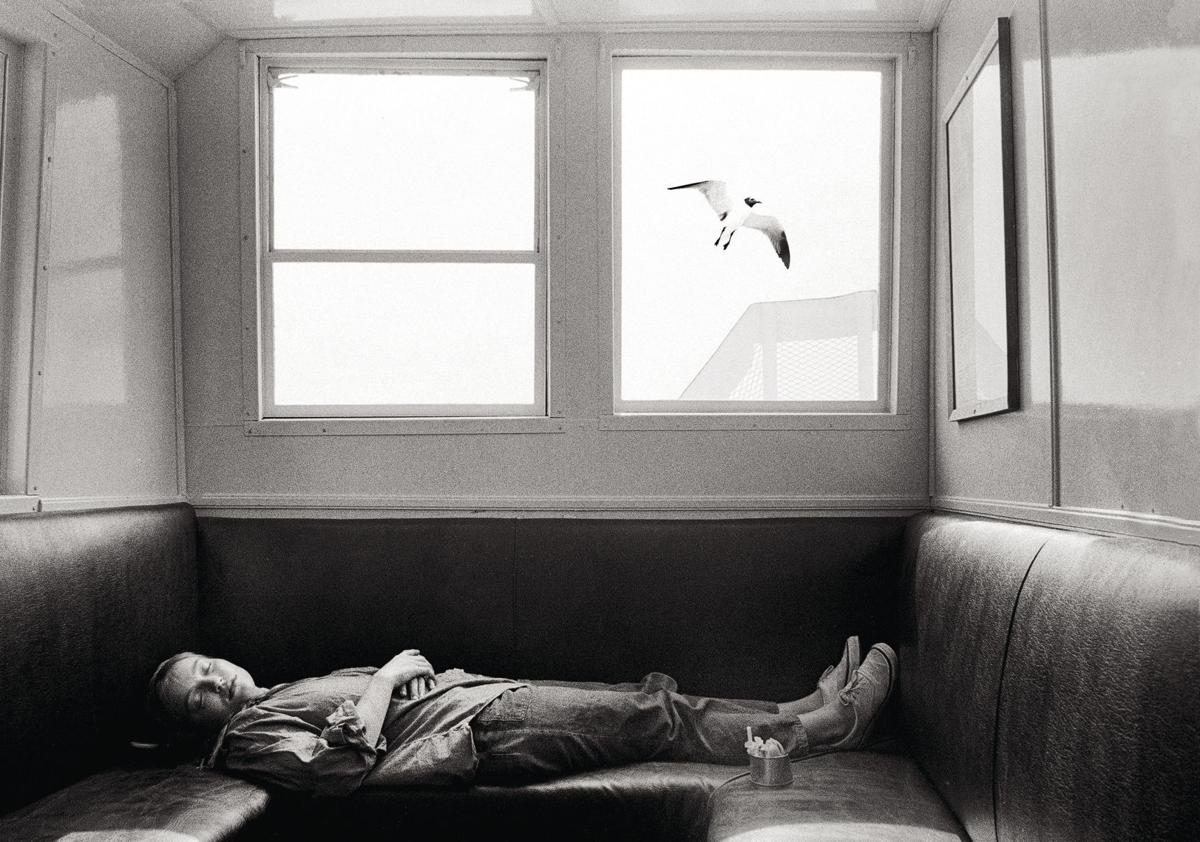 This early photograph by Robert Sulkin, “Ann, Ocracoke Ferry,” turned out to be an example of his interest in creating illusion. The bird seen in the window was added to the photo of the sleeping woman. 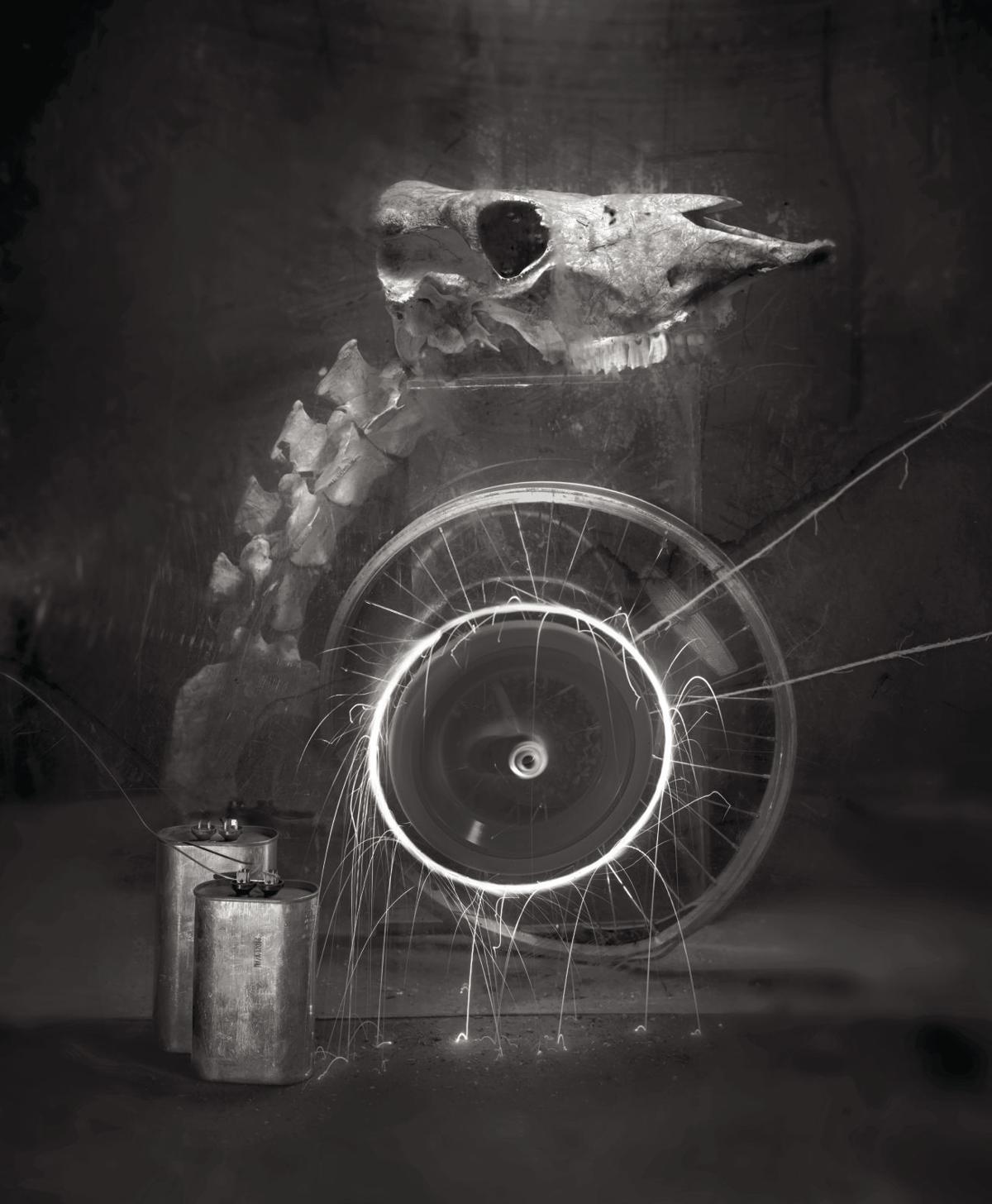 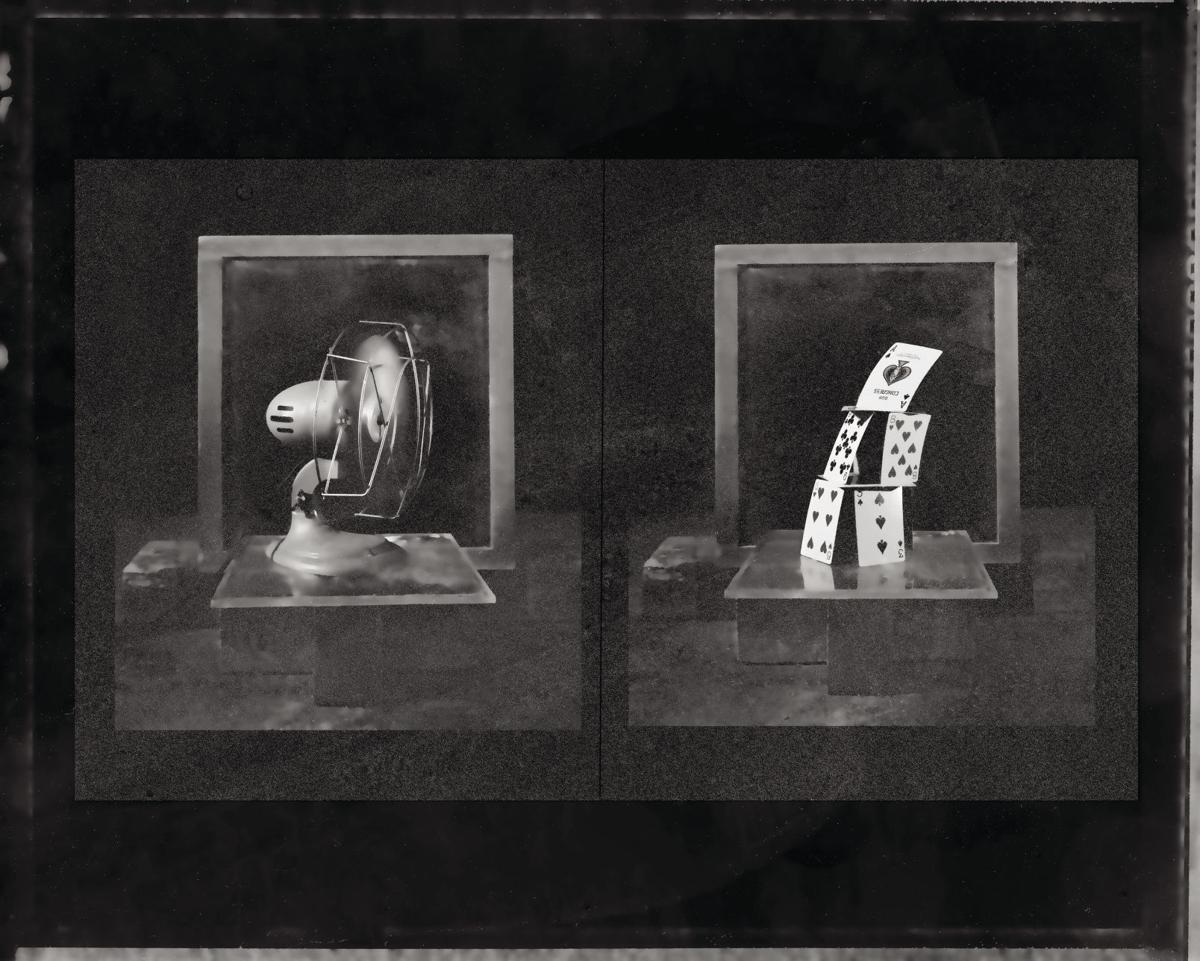 From Robert Sulkin’s “Constructions & Experiments” series, his 2008 print “Experiment 10” demonstrates his playful side.

This early photograph by Robert Sulkin, “Ann, Ocracoke Ferry,” turned out to be an example of his interest in creating illusion. The bird seen in the window was added to the photo of the sleeping woman.

From Robert Sulkin’s “Constructions & Experiments” series, his 2008 print “Experiment 10” demonstrates his playful side.

Roanoke photographer Robert Sulkin specializes in illusion. In fact, one of his images proclaims this loud and clear, depicting an open book that reads, “You are not seeing what you think you are seeing.”

A number of his images depict impossible machines that incorporate electricity, wheels, tinker toys and animal bones, some of which appear to be activated and functioning. “One of the things that I do in my work is that I really try to push the limits of believability,” Sulkin said. “It’s like I’m an alter ego. I’m kind of a combination between the mad scientist and the experimenter and the inventor in my studio.”

Sulkin, 71, retired in 2019 after 39 years on the Hollins University faculty. A new exhibition that offers a career retrospective of his work, “Robert Sulkin: Photographs 1973-2019,” opened Thursday in the Eleanor D. Wilson Museum at Hollins and will stay on display through March 19.

“This is my return from the crypt,” Sulkin said with a chuckle.

In the catalog for the exhibition, museum director Jenine Culligan wrote that the retrospective shows “a progression of style and experimentation, some playful, some farcical, and some serious.”

A native of Winston-Salem, Sulkin graduated from the University of North Carolina with a history degree. When it came to photography, “I was pretty much self-taught.”

He began his first series of photographs at Chapel Hill, in the naturalistic style practiced by American artists like Lee Friedlander and Robert Frank. “Social landscape has to do with photographing people in social environments that aren’t news events,” Sulkin said. “Social landscape photography is often street photography. I was living in a sparsely populated place, so to get around that, I would go to events like the Fourth of July parade or the state fair in Raleigh, or a dog show. So even then, these take on sort of a tableau kind of look.”

One striking image in particular presages the trickery Sulkin would employ later. “Ann, Okracoke Ferry” appears to depict a remarkable moment in which Sulkin captured a bird flying past an open window while a woman slept. In fact, Sulkin added the bird later, not unlike the way O. Winston Link would hand-alter his famous photos of Norfolk & Western steam engines to emphasize the nostalgic mood.

After earning his M.F.A. in photography and coming to Hollins, Sulkin set up a studio in the old parsonage building on the campus. The majority of the photos in the retrospective were composed there. Essentially, they are still lifes, in which he arranged objects and set up shots from angles that give them an appearance of tight cohesion. Some look like sculptures assembled as tributes to modern artists, well-known works of art and stories from mythology.

He came to specialize in the fabricated or constructed image, using black and white photography and techniques for altering negatives. “They had to do with illusion, the vantage point of the camera that transformed the images into an organized event. If you walked into the studio, nothing would look anything like this at all.”

Many of the images balance playful, humorous instincts with evocations of serious subject matter. One series called “Circa 20th Century” makes use of slide projections of images from vintage television shows to imagine anthropologists sorting through the ruins of 20th-century culture, seeking to reconstruct the factors that led to society’s downfall. Sulkin describes his series of strange machines, “Prototypes,” as “the musings of a mad inventor, perhaps on a quest to find alternative fuel technologies, but without the proper materials or expertise.”

One of his most recent series, “Elegies,” takes an abstract look at the horrors of war. In a critique of minimizing language like “collateral damage,” he creates collages of apparently neutral imagery like maps and numbers to represent sites where terrible atrocities took place, like My Lai in Vietnam and Auschwitz in Poland.

Another set of recent photos shows Sulkin returning to outdoor photography, but learning which parts of the images are real and which parts the artist created using software may well surprise the viewer. “They’re another kind of fiction, like all the works in the show,” he said.

Sulkin will give a lecture about his show at 6 p.m. Feb. 13 at the university’s Richard Wetherill Visual Arts Center. Admission is free.

On display through March 29