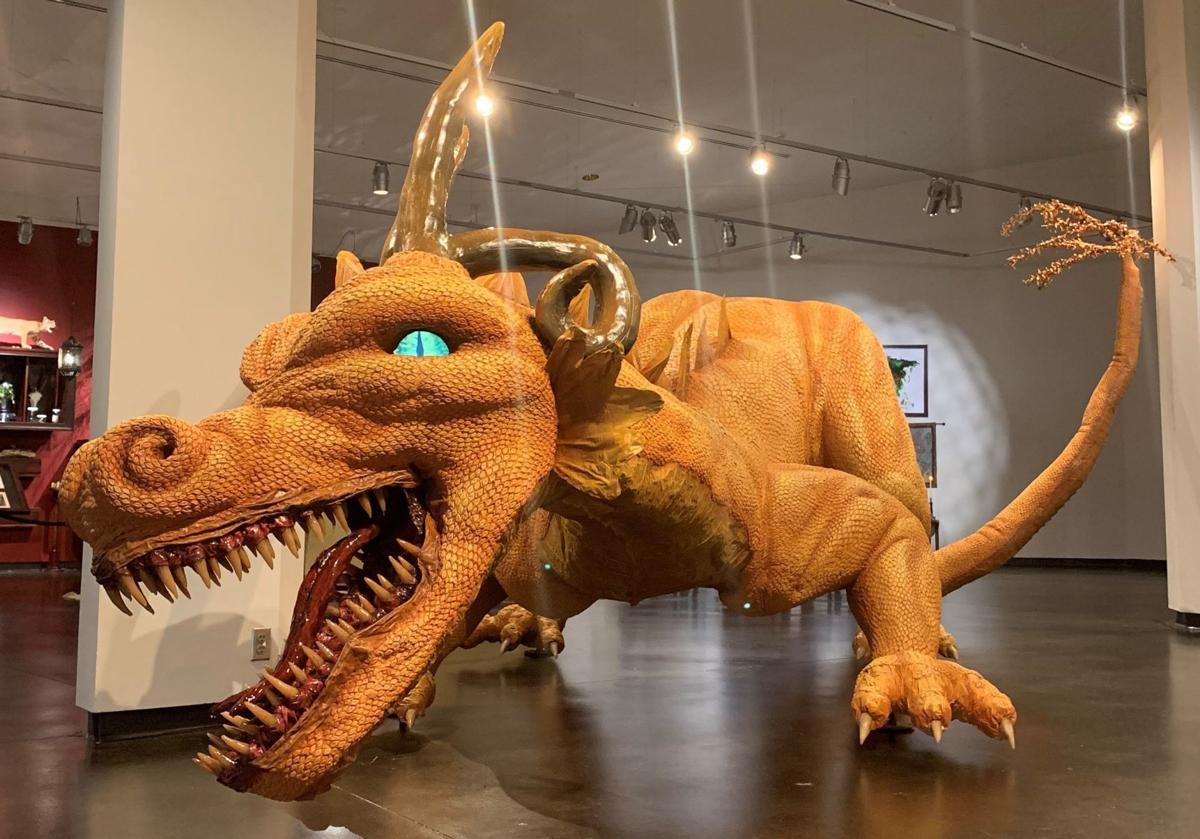 Gretna artist Jennifer Buckingham’s 37-foot-long “Tiamat” greets visitors to “On the Origins of Dragons” with glowing eyes and long teeth. The exhibition’s title echoes Charles Darwin’s landmark book “On the Origin of Species.” 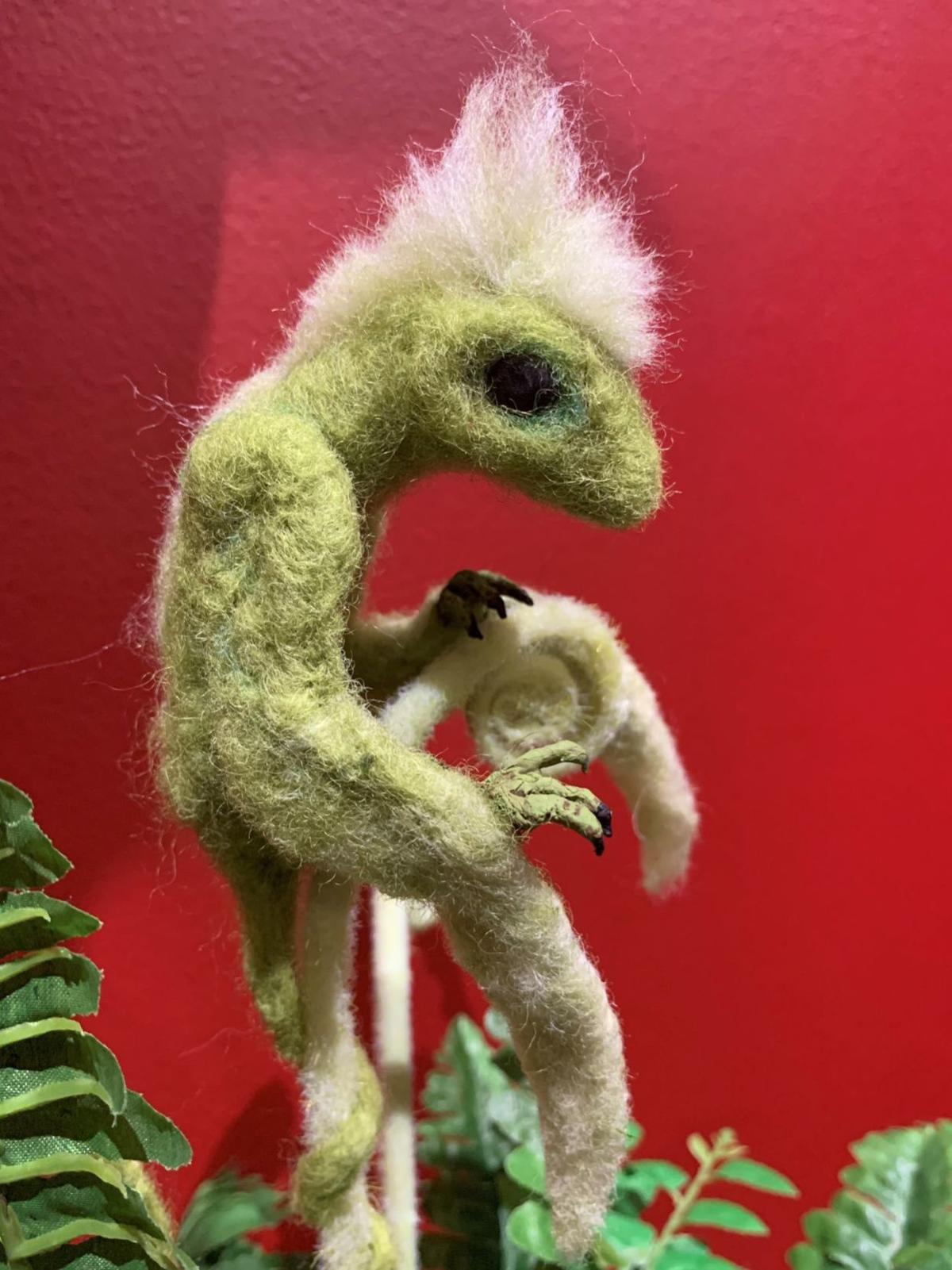 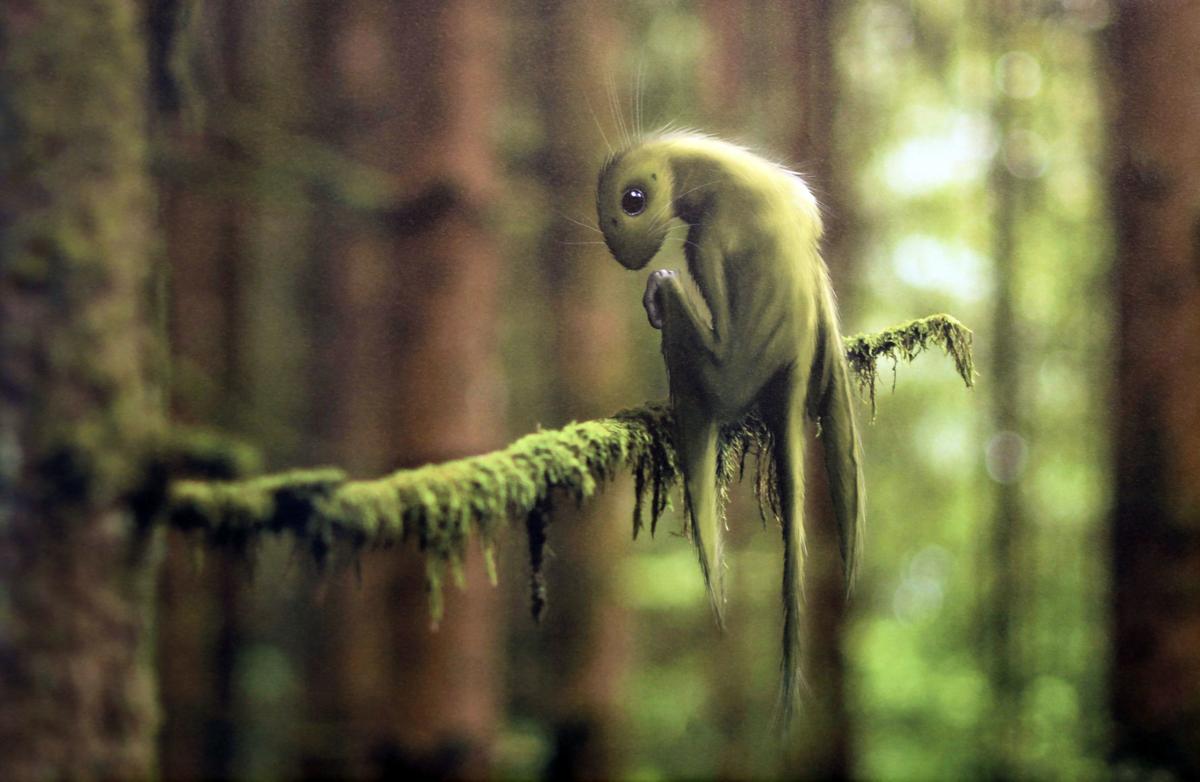 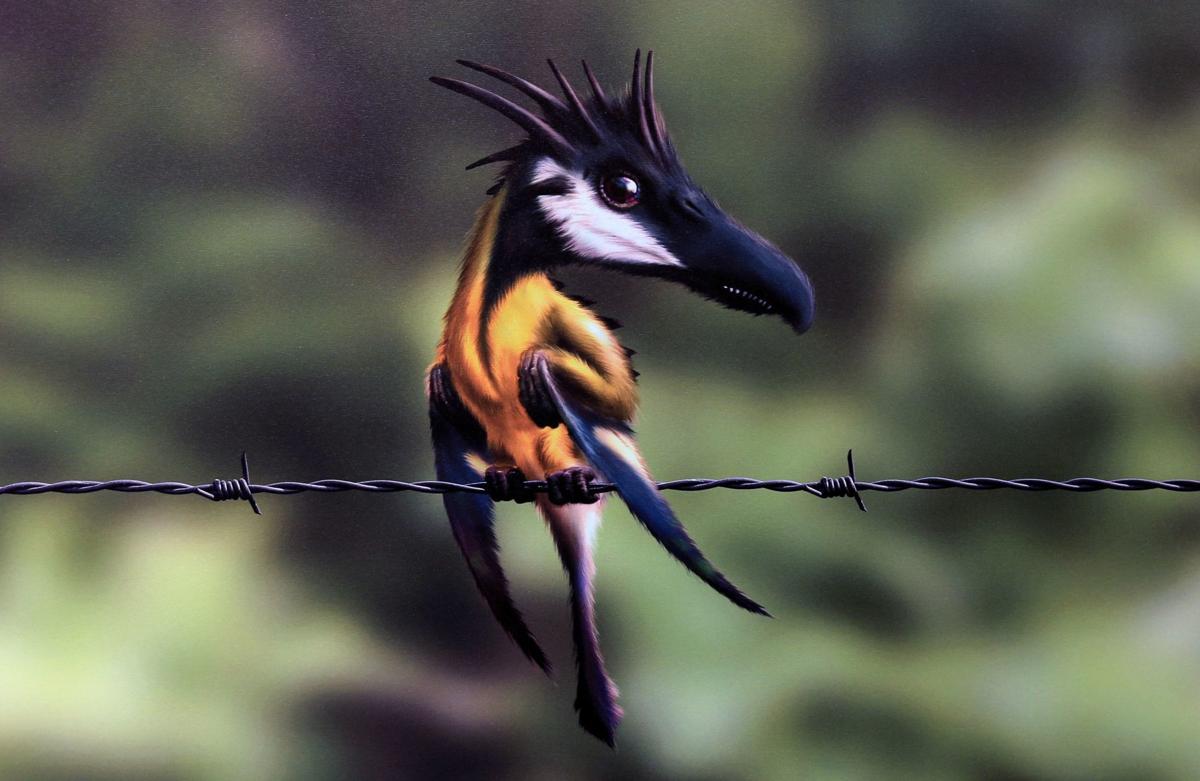 Gretna artist Jennifer Buckingham’s 37-foot-long “Tiamat” greets visitors to “On the Origins of Dragons” with glowing eyes and long teeth. The exhibition’s title echoes Charles Darwin’s landmark book “On the Origin of Species.”

SALEM — Fantastic beasts gigantic and tiny inhabit the newest exhibitions at Roanoke College’s Olin Hall Galleries, which pose the question: Where do dragons come from?

The obvious answer is the imagination — but that raises a further question: What caused humankind to imagine dragons?

“On the Origins of Dragons” makes an intriguing case tying the notion of the existence of dragons to the fossils of a certain kind of prehistoric tree. The show paired with it, “Dreigiau O Gymru” by Welsh designer and artist Andy Frazer, might, with its photographic details, convince viewers that dragons still exist today, much in the way birds have been said to be direct descendants of dinosaurs.

The title of Frazer’s show translates to “Dragons of Wales.” His sketches and digital prints imitate naturalist notes and nature photography, but his subjects are tiny, colorful, bird-like dragons. The images combine real photos with digitally created creatures. In 2017, he self-published his first book of these creations, funded by the first of four successful Kickstarter crowdfunding campaigns that have enabled him to continue to concoct modern-day dragons and dinosaurs. He funds even more dragon-related projects through his “Dragons of Wales” Patreon page.

In a 2018 essay on the folklorethursday.com website, Frazer explained his parameters. “I knew from the outset that these creatures couldn’t be the fire-breathing beasts of old,” he wrote. “I chose to create a more plausible kind of dragon, one that descended from real prehistoric creatures preserved in the UK fossil-record: the creatures known as pterosaurs … Whilst many pterosaurs evolved into much larger species, the forebears of my Welsh dragons took a different path, becoming smaller, more specialised and more diverse.”

“On the Origins of Dragons” centers on a fun hypothesis from Roanoke College biology professor DorothyBelle Poli and education professor Lisa Stoneman, and expands on a similar exhibition, “Hunting Dragons: Origins,” shown in downtown Roanoke’s Wilson Hughes Gallery in 2016.

Poli, Stoneman and a group of undergraduates created the Dragon Research Collaborative in 2013 to explore the idea that legends of dragons could be inspired by fossils of a plant similar to a fern, known as Lepidodendron, or “scale tree.” More than 300 years ago, these towering 100-foot-tall “scale trees,” covered with a bark-like surface that resembles reptile scales, grew all over the world’s land mass, a single continent called Pangaea. Their fossils, frequently found in coal seams, could resemble limbs, claws or even eyes of an immense reptilian creature.

The research group’s hypothesis suggests that the concept of dragons arose wherever early humans found these fossils. Examples of the fossils are part of the show, as are colorful topographical maps created by Salem artist Kyra Hinton using a chemically reactive ink process the artist developed herself.

The antique furniture, scientific instruments and maps give the “Origins of Dragons” display a Victorian ambiance that wouldn’t be out of place in one of the Harry Potter-related “Fantastic Beasts” films.

“They kind of handed it over to us to think about taking the idea of Darwin’s study, his library, as well as a wunderkammer, cabinet of curiosities, and to be able to showcase the fossil folklore hypothesis,” said Talia Logan, director of Olin Hall Galleries.

Taxidermically preserved animals from the Virginia Museum of Natural History in Martinsville bare their fangs on the shelves. “All the animals that we chose from the natural history museum are animals that are referenced in folklore that different cultures pulled from to create dragons,” said assistant gallery director Lacey Leonard.

Speaking of bared fangs, Gretna artist Jennifer Buckingham created a life-size — or should that be larger-than-life size? — dragon for the show that makes use of the bark patterns found on the fossils. The dragon, 37 feet long, is a rendition of Tiamat, an ancient Mesopotamian dragon goddess. Buckingham also created sculptures of Frazer’s tiny Welsh dragons, which can be found on the “library” shelves.

Organizers intend for “On the Origins of Dragons” to become a traveling exhibition.

The Historical Society of Western Virginia has won a $500 prize from the Virginia’s Top 10 Endangered Artifacts program overseen by the Virginia Association of Museums. The funds will assist with the restoration of a receipt book, or cookbook, that belonged to Eliza Breckinridge Watts, the daughter of Gen. James Breckinridge of Fincastle, a representative for Botetourt County in the early years of the Virginia House of Delegates. The full restoration is expected to cost $3,000. The historical society intends to include the book in an exhibition tied into Botetourt County’s 250th anniversary celebration this year.

“Dreigiau O Gymru” and "On the Origins of Dragons" and

On display through March 22

GRETNA — When Jennifer Buckingham was launched through the windshield and sustained 85% paralysis in her arms in a car crash in 2002, she thou…