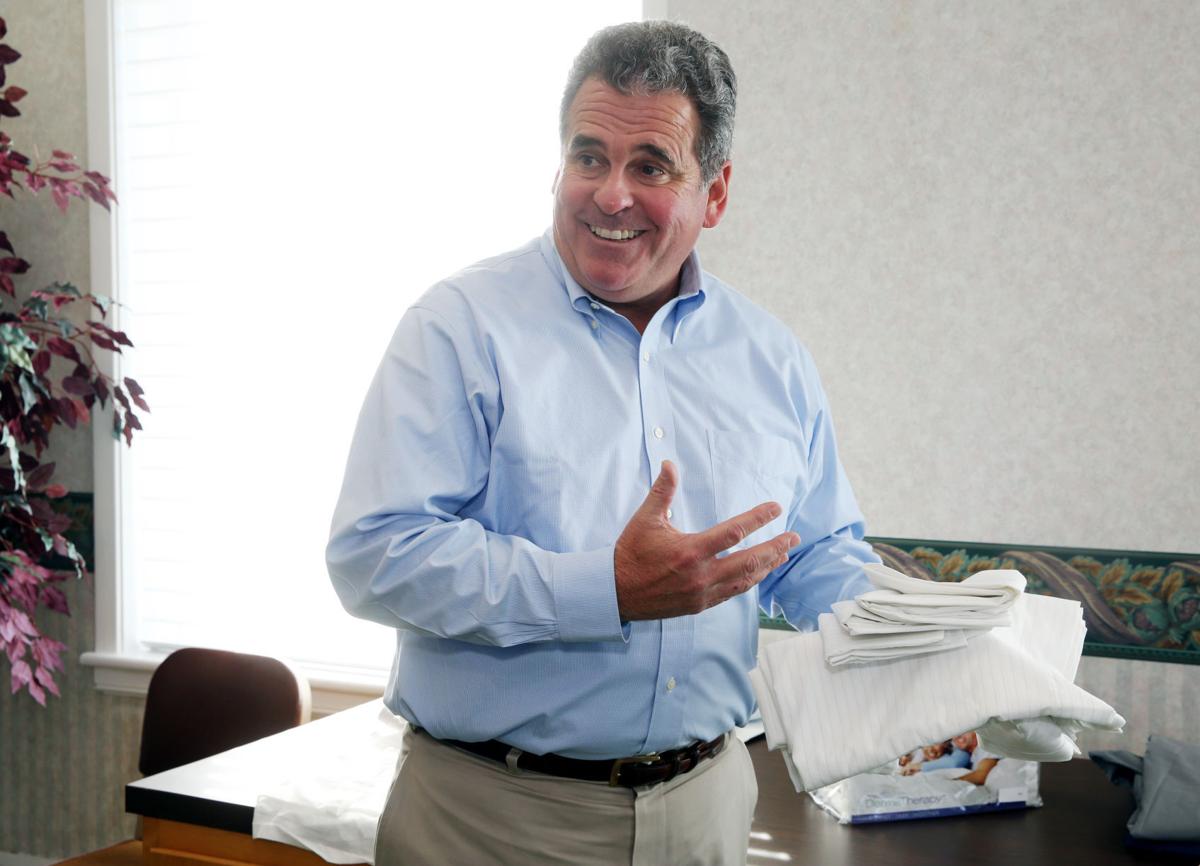 James Barry, business manager for Precision Fabrics’ health products, said the company’s new DermaTherapy fabric is like “Under Armour for your bed.” 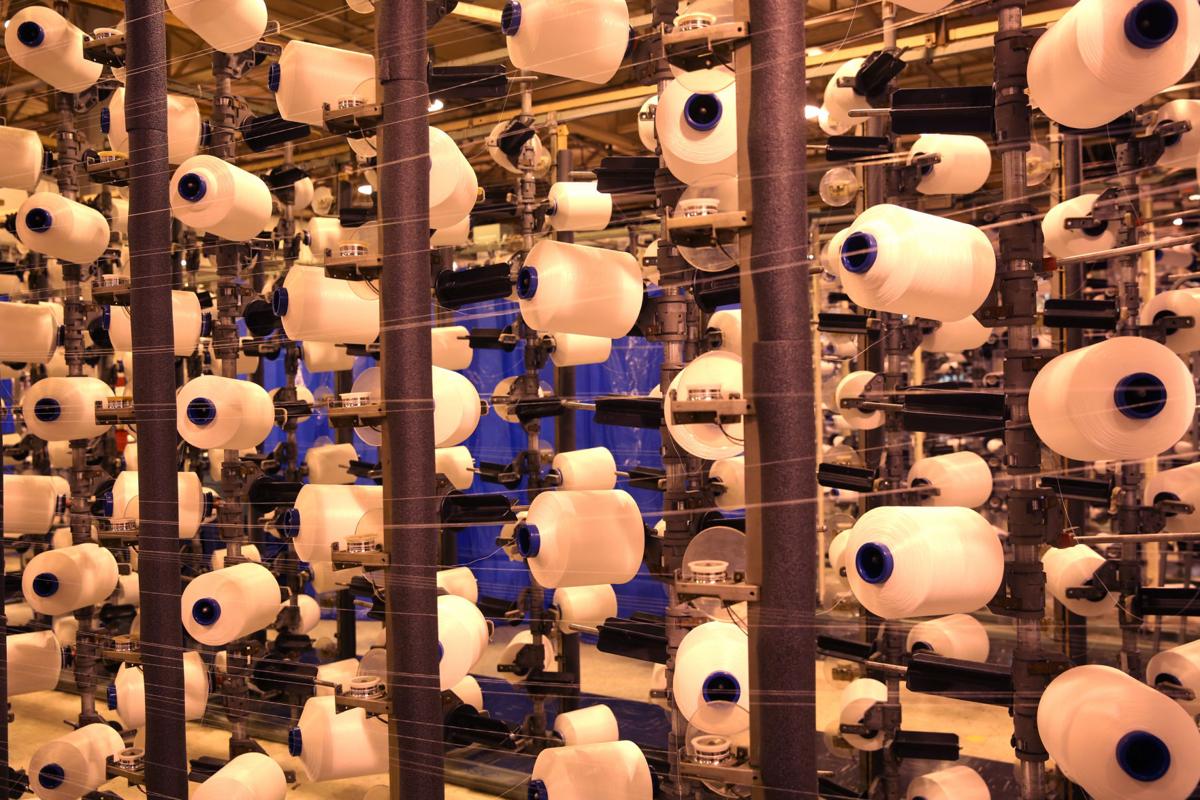 James Barry, business manager for Precision Fabrics’ health products, said the company’s new DermaTherapy fabric is like “Under Armour for your bed.”

Precision Fabrics was testing a synthetic silk sheet to determine if a new fabric engineered at its Vinton plant would wick away the moisture and heat of hot flashes and allow women going through menopause to sleep better.

Then the sister of a corporate manager became ill with cancer and developed several bed sores.

“He saw the ravage that they created, knew what we did and said, ‘We have to advance this technology.’ That accelerated it from menopause and overall better, deeper sleep to an application in acute health care, long-term care and home health care,” said James Barry, business manager for the company’s health products.

Precision Fabrics partnered with Standard Textile, a global supplier of hospital linens with U.S. headquarters in Ohio, to test DermaTherapy. After 11 clinical trials at several hospitals showed incidences of pressure ulcers were reduced by 65 percent to 80 percent, the Food and Drug Administration in June certified DermaTherapy as a medical device.

It’s a first for a bed sheet, and it flips conventional thinking: Instead of sheets and pads protecting the mattress, they protect the patient.

“It’s Under Armour for your bed,” Barry said. “You don’t go out today and run or work out, cross train, bike or play tennis in 100 percent cotton. You play in engineered fabric, so why wouldn’t you put it on your bed for all the same reasons?”

What the company found during the trials is that so-called pressure ulcers aren’t caused by pressure at all but rather by what happens when moisture, friction and shear of bed linens interact with skin.

“There’s been so much focus for decades on managing the pressure of the surface. Billions of dollars have been spent, and there are 200 surface products, mattresses and things that go on them that focus on pressure. They still put the lowest-grade cotton or poly-cotton linens on them. And that’s what’s touching the skin,” Barry said.

The short fibers of cotton break down with use and become abrasive. “Never mind an uncompromised behind, but when you put an 85-year-old with skin issues on them and you add moisture and friction, it gets sticky and creates torque and shear. That’s what causes the beginning of pressure ulcers and other skin issues,” he said.

The Centers for Medicare and Medicaid Services estimate that hospital-acquired pressure ulcers add about $11 billion to the nation’s health care bill each year. CMS will not reimburse hospitals for treating bed sores since they are considered avoidable. These wounds generally occur on patients who are in frail health and can lead to rapid decline and death.

“We set out seven or eight years ago to develop a product that would be incredibly kind to the skin and that would manage the moisture and friction and the shear,” Barry said. “We learned that after we started doing clinical trials. It’s less about the pressure. We put these linens on all different types of surfaces. No matter what the pressure, ulcers went down. Through 11 clinical trials, we showed the surface of the mattress is a lot less important than what touches the skin.”

The patented fabric has carbon channels and antimicrobial characteristics to reduce odor and static, and a treatment to repel stains.

Though the company cannot claim reduction in infection rates, as it has not conducted clinical trials and gained FDA certification for that component, “hospitals have told us the bad stuff — MRSA, E. coli, C. diff — has gone down, and at the end of the day, it smells better, which is a huge deal, especially in long-term care,” he said.

With the FDA approval, the company hopes that it can change the mindset of hospital and nursing home managers to view bed sheets as part of patients’ treatment rather than as housekeeping items.

Precision Fabrics has been talking with Carilion Clinic but has yet to get into the local hospital system.

The company’s headquarters in Greensboro, North Carolina, turned to Moses Cone Hospital for its first trials in the renal unit and then the surgical intensive care unit. It would like to foster a similar arrangement with Carilion.

“We’re always interested in improving the care our patients receive, so those conversations continue, particularly in light of the FDA clearance a few weeks ago,” said Carilion spokesman Chris Turnbull.

Vinton plant manager Mike Maust said he’s looking forward to other hospitals and long-term care centers seeing the benefits of the fabric and is preparing for a run on sheets.

“We’d love to employ 500 people right here in Vinton,” he said, adding that the company has about 28 acres to build upon.

The 330,000-square-foot plant operates three shifts with 185 employees. It makes about 50 million square yards of engineered woven fabric each year, much of it for parachutes and the aerospace industry. On a product wall is a photo of the U.S. Airways flight dubbed the “Miracle on the Hudson,” the subject of the recent movie “Sully.” The fabric for the inflatable chute was made in Vinton, Maust said.

The company also makes a sports line that it says some professional and college athletes use as a recovery rest tool, since the sheets promote a deeper sleep with less waking.

Barry said he packs at least a pillowcase for himself when he stays in hotels.

1. A University of Virginia neurosurgeon, who grew up in Roanoke and graduated from Cave Spring High School, is pioneering an ultrasound treat…