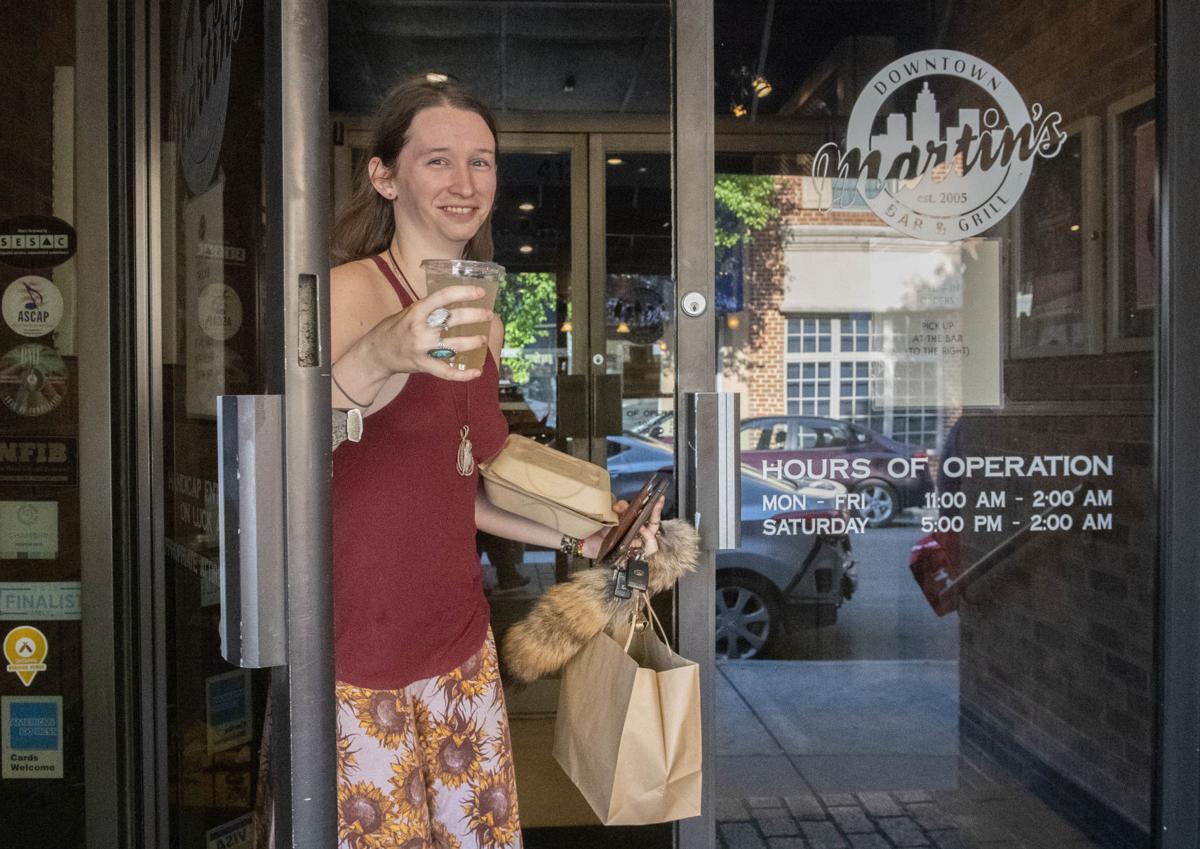 Jordan Holland leaves Martin’s Downtown with a food and beverage order Friday evening. “We’re doing beer, wine, mixed drinks, all to go,” said owner Jason Martin. “It’s a drop in the bucket for what we’re missing in total alcohol revenue. … Alcohol is down 95%.” 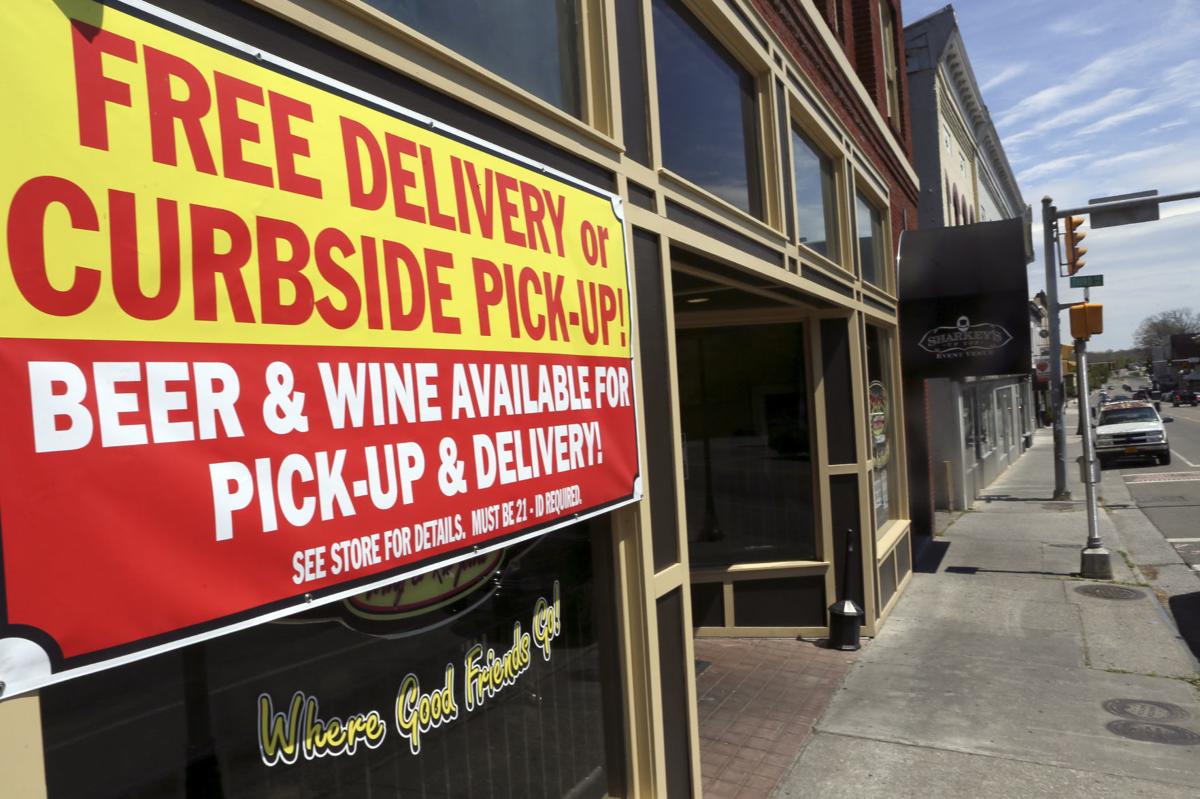 Sharkey’s Wing and Rib Joint on Main Street in Radford has been selling mixed drinks through carry-out and delivery for the past week. 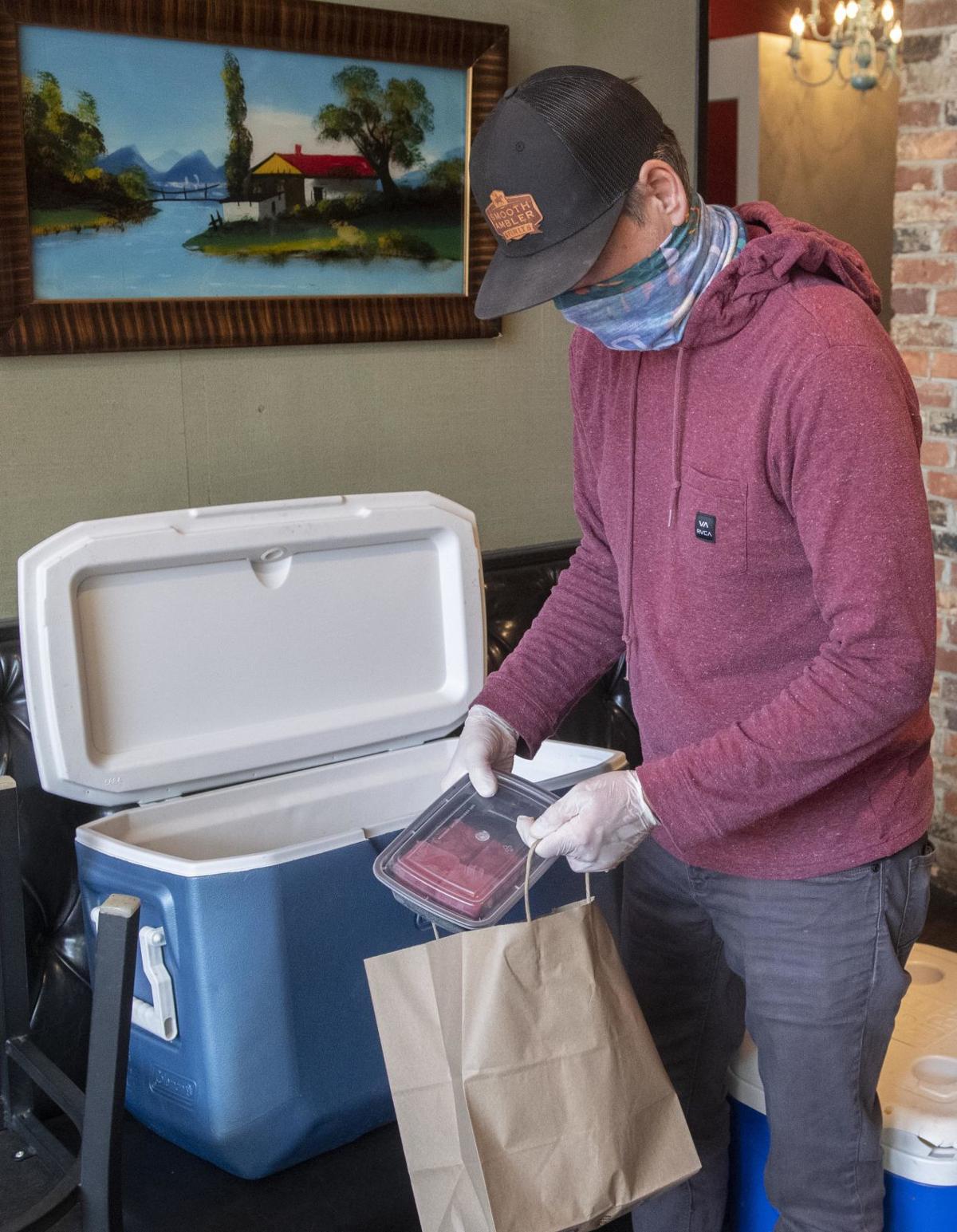 Hunter Johnson, co-owner of the Roanoke restaurant Lucky, bags up orders of The Cube for carry-out. The Cube is a frozen block of ingredients to which liquor can later be added by the customer.

Jordan Holland leaves Martin’s Downtown with a food and beverage order Friday evening. “We’re doing beer, wine, mixed drinks, all to go,” said owner Jason Martin. “It’s a drop in the bucket for what we’re missing in total alcohol revenue. … Alcohol is down 95%.”

Sharkey’s Wing and Rib Joint on Main Street in Radford has been selling mixed drinks through carry-out and delivery for the past week.

Hunter Johnson, co-owner of the Roanoke restaurant Lucky, bags up orders of The Cube for carry-out. The Cube is a frozen block of ingredients to which liquor can later be added by the customer.

Lucky in downtown Roanoke sells Pear Skin Rug cocktail kits. The name of the drink was incorrect in an earlier version of this story.

The recent news that Virginia restaurants and distilleries may now sell mixed drinks to go and for delivery had to raise worst-case scenarios in the minds of at least some who heard about it.

Would bar patrons start rolling out onto streets and sidewalks, cocktails in hand?

Of course not, but still ... Even coming in the wake of other loosened state restrictions on wine and beer sales, the policy change felt like a precedent, albeit one with profits.

“Allowing them to sell mixed beverages ... will help them augment their revenue streams so they can continue to operate and employ Virginians” amid the COVID-19 lockdown, Gov. Ralph Northam said April 8, two days before the move took effect, and about a week before word broke that a record 22 million Americans have applied for unemployment benefits since the crisis began.

In the time since, restaurateurs around the Roanoke and New River valleys have acknowledged that, while the changes reveal the scale of their new financial challenges, it’s still a welcome bandage.

“It definitely has increased sales this past week,” said Stephanie Rogol, who operates restaurants in Blacksburg, Daleville and Radford, all of which have started offering mixed drinks for carry-out and delivery.

“Before, we weren’t even close to breaking even,” she added. “Otherwise, it would be impossible [to] tread water through this.”

‘Every little bit seems to help’

The new changes do not make it legal to consume alcohol in public. Mixed beverages must travel in containers no bigger than 16 ounces, and be sealed with a hole-free lid that requires full removal before the drink can be drunk.

Patrons are required to order food with their libations: one meal for every two cocktails, with a maximum of four drinks per take-out or delivery order. Distilleries may deliver two beverages, containing a maximum of 3 ounces of spirits.

Drivers must transport the cargo in their trunks, or in part of the vehicle that can’t be accessed from the front seat, according to Virginia ABC rules. Restaurants can refuse the sale if the customer doesn’t have valid proof of their age.

While most area restaurants are no longer staying open past about 9 p.m., mixed drink sales are prohibited between 11 p.m. and 6 a.m.

On Friday, Thomas Lisk, a lobbyist with the Virginia Restaurant, Lodging and Travel Association, said the new allowances haven’t come without complications. Little issues, like the fact that most drink lids come with holes for straws, have forced some restaurateurs to get creative, scramble for new supplies, or use more expensive options such as jars.

But Lisk, who pushed for the policy changes, said they still represent a positive step, with some small advantages: “The mark-up for mixed beverages and spirit-based drinks tends to be larger than for beer or wine,” he said. “I don’t know if it’s going to make a big difference, but right now in this environment, every little bit seems to help.”

A boost, not a windfall

For most sit-down restaurants, the social component is central to their draw, whether they offer a boutique dining experience or a live music venue.

Some Roanoke establishments, unable to pivot to delivery, are now trying the new carry-out and curb-service options.

“Part of the charm of coming to our restaurants is the atmosphere,” said Hunter Johnson, who co-owns and operates a pair of upscale eateries along Kirk Avenue: Lucky and Fortunato.

“Through the second week of March, we had two restaurants that were having the start of our best year ever,” Johnson said. “We went from having an incredible business to, theoretically, it’s gone.”

His two restaurants used to employ 42 staffers between them. That number is now down to 10, and he estimates business has dropped by 75% to 80%.

“For us, cocktails are a big part of what we do. Until they announced [the new policies], we were scrambling to figure out what we were going to do,” he said.

Both establishments now offer meal and drink pick-ups in the afternoons and evenings, Wednesday through Saturday.

But Johnson said one of Lucky’s best-selling items is something of a fluke: The Cube, a frozen block containing ginger root, apples and other ingredients, but no alcohol. It’s a cocktail Johnson initially started making because it could be prepared in advance and stored for rushes. In its take-out form, customers must add their own whiskey.

“As it melts, the drink changes. You have a very different experience from the time you start it until the time you finish,” Johnson said.

His theory, a week into the new regulations, is that many customers already have alcohol on hand. What they want are signature items they can’t get in a store, he said — “Things that are specific to us, things that we actually make in-house.”

“I’m making five times the amount than I normally would,” he said, and because alcohol is a separate component, The Cube is not bound by restrictions: “You could buy a hundred if you wanted to.”

Conversely, however, he said the movement of actual liquor drinks is seeing reverse momentum.

“We sold 26 cocktails-for-two last week. That’d be like 52 individual drinks,” Johnson explained. “On a Friday, Saturday night, they [his bartenders] probably make like 250 on a busy night. During the week, they’re doing 150.

Meanwhile on First Street, the popular dining room and live music venue Martin’s Downtown has quieted considerably. It shifted to carry-out with some food delivery weeks ago.

“We’re doing beer, wine, mixed drinks, all to go,” said owner Jason Martin. “It’s a drop in the bucket for what we’re missing in total alcohol revenue. I think our food sales are down 25 to 30%, but alcohol is down 95%.”

Martin’s side venture, the European-style bistro Sidecar, has ceased operations for now; its fare doesn’t lend itself to travel, Martin said.

In the interim, he’s launched Martin’s Market online, selling raw products like salmon, steaks and salads, which he said requires almost no overhead.

“We’re basically breaking even, covering our costs, which is a lot more than most people can say,” Martin said last week. “We’re paying our bills. I consider that’s worth keeping the fight going.”

Across town, a southwest Roanoke County staple, the Brambleton Deli, offers beer and wine to go but plays it straight when it comes to cocktails.

“It was a nice gesture, the state trying to do everything they can to boost sales for us,” he offered, but said, “None of it has been a windfall.”

Moore said his food business of late has nearly doubled from what it was since he had to close the bar and dining room.

“The last two days, we’ve done about 50% of our normal sales. That’s pretty good, considering,” he said, and although that could indicate the restaurant market is starting to adjust to the lockdown, Moore attributes the increase to two likely factors: boredom and stimulus checks.

“As long as our overhead’s not killer, and we don’t have a big debt load, we can survive like this for a long time,” Moore said. “I wouldn’t want to.”

Stephanie Rogol owns and operates two popular bars in two college towns, Sharkey’s in both Blacksburg and Radford, for which April and May usually represent two of the most lucrative months.

This year, however, food business is down by about 65% and liquor sales are roughly 10% of what they normally are, she said. Her other restaurants in Daleville — the Town Center Tap House and Tizzone Woodfire Kitchen — have seen similar dips.

“All four locations are now doing delivery and take-out” from 11:30 a.m. to 9 p.m. daily, she said last week. “We needed to give our staff the ability to make money.

“Anybody that wants to work, is,” she explained, and said her recent drop in staffing from about 170 employees to approximately 110 was mostly due to those who did not want to work during the pandemic, some who needed to take care of family members, or students who did not return after spring break.

But not everybody has disappeared, Rogol’s informal poll indicates: “We’ve been moving a ton of Long Island iced teas in Blacksburg.”

Her primary complaint is that social distancing sours a crucial element of her restaurants’ function.

“It’s very hard to engage guests when all you’re doing is curbside and delivery,” she said. “For a lot of people, this is their social interaction. A lot of our regulars ... we reach out to them on Facebook and they’re lonely.”

Rogol is experimenting with ways to branch out socially but safely. Tizzone recently started Unwined, a virtual wine tasting via Zoom. For $60, participants get two bottles of wine, a cheese platter and entry into an online class with Tizzone’s chef.

Twelve people participated in the first virtual get-together Sunday, and Rogol deemed it a success. She now says she hopes to use similar online technology to hold bingo tournaments and trivia nights.

“I think the best thing that’s going to come from this is ... survival of the fittest. And the businesses that survive are going to be the businesses that actually care about their stakeholders. Their employees. Their vendors. Their customers. Everybody that’s involved, everybody whose lives they touch.

“I do really believe the world will become a better place for this. But I am a hopeless optimist,” Rogol said.