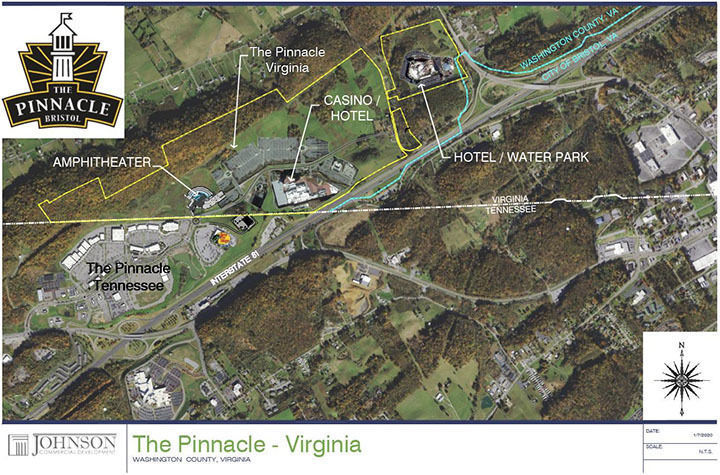 The Eastern Band of Cherokee Indians has reached an agreement with developer Steve Johnson to develop and operate a casino on a 350-acre tract in Washington County, Virginia, adjacent to The Pinnacle retail center.

The Eastern Band of Cherokee Indians has reached an agreement with developer Steve Johnson to develop and operate a casino on a 350-acre tract in Washington County, Virginia, adjacent to The Pinnacle retail center.

BRISTOL, Va. — Developers of a newly proposed second local casino are betting the state of Virginia will use competitive bidding to award casino licenses.

On Tuesday, the Eastern Band of Cherokee Indians and Johnson Commercial Development announced an agreement to establish a casino on the currently undeveloped 350-acre portion of The Pinnacle commercial center in Washington County, Virginia.

It would compete directly with the proposed Hard Rock Bristol Resort and Casino planned just a mile away, inside the city limits, at the former Bristol Mall.

Legislation approved in 2019 named Bristol and four other Virginia cities as potential sites for gaming casinos, but the act must be reauthorized by the General Assembly this year. Bristol, Danville, Norfolk, Portsmouth and Richmond are the only localities named in House Bill 374 and its companion, Senate Bill 102, meaning the county site has no standing. All casinos would also be dependent on approval by local voter referenda.

In August 2018, Bristol businessmen Jim McGlothlin and Clyde Stacy announced their intent to establish a casino at the vacant mall with plans to invest at least $250 million of their money. They supported the 2019 legislative effort that ultimately ordered the 2019 study of gaming by the Virginia Joint Legislative Audit and Review Commission.

Of the cities named in the current legislation, only Danville is without a proposed casino operator. In November, Portsmouth announced an alliance with Rush Street Gaming of Chicago to develop a 400,000-square-foot gaming and entertainment facility with a 3,000-seat performance venue, restaurants and meeting space.

The Pamunkey Indian Tribe signed a September agreement with the city of Norfolk to develop a $700 million casino on a 13.4-acre downtown site. The tribe has also expressed interest in establishing a casino in the Richmond area.

However, one of that study’s recommendations is for lawmakers to consider awarding casino licenses through a competitive bidding process.

Greg Habeeb, who represents the Cherokee project, explained the plans to the Bristol Herald Courier on Tuesday. He is a partner at the Richmond-based Gentry Locke law firm and a former member of the Virginia House of Delegates.

“Ultimately, what the state needs to do — put individual projects aside — the state is going to do very few casinos, so when they do them, they must be done right and with the broadest economic impact in mind, and we think that this project, standing up against any other project in the region, will show remarkable economic impact that will last for generations,” Habeeb said of The Pinnacle project.

Johnson told the Herald Courier on Tuesday that this could be the legislative session during which lawmakers approve casino gaming.

“We’re buoyed by really the high points of the study, which, in my view, were the fact that if Virginia were going to move forward with gaming, and how it would look like and however it looks, that the state’s desire would be for it to be a competitive process, number one, and then their desire to be aligned with a federally recognized tribal nation. Those are two very salient points that really, in my view, highlighted the JLARC study,” Johnson said.

The Bristol casino group declined to issue a comment regarding Tuesday’s announcement.

Last week, McGlothlin expressed his disdain for the idea of a competitive bidding process.

“I don’t know how that would work. We have a standing facility that we made a purchase of, and it seems we would be the choice for the city,” McGlothlin said. “I would propose that we don’t need to make this two or three years of having RFPs [requests for proposals] and everybody in the world come here. We need the city to make that choice and let the referendum be voted on. Then the state would have to issue the license, and, at that point, if they don’t like the proposed operator, the state could turn it down. … We can’t wait years and years to do this.”

Habeeb said no economic impact studies have been completed regarding The Pinnacle casino.

In the case of the Harrah’s Cherokee Casino in North Carolina, the tribe provides a percentage of gross gaming revenue from live table games to the state, according to the American Gaming Association. That amount is currently 5%, and the state is required to use the money to fund schools.

The JLARC study forecasts taxing Virginia gaming profits at between 12% and 40%, with monies split between the state and localities.

According to the JLARC study, the Hard Rock project is forecast to create at least 1,000 direct jobs, 400 indirect jobs and generate $130 million in annual tax revenues for the city, region and state.

“Most of Virginia’s peer states use a competitive bidding process to award casino licenses, which creates market competition. Market competition helps ensure that the few available casino licenses are awarded to the most qualified and financially stable owners/operators who submit the most realistic and responsible proposals,” according to the report summary. “A competitive selection process is especially important in a limited casino market in which the limited number of casino licenses effectively creates a monopoly for casino owners/operators. A limited casino market is contemplated in SB 1126 [2019 legislation], but a competitive bidding process is not included in the legislation.”

State Del. Terry Kilgore, R-Gate City, who is chief patron of this year’s House Bill 374, said this announcement could complicate discussions during the upcoming session.

“The problem with competitive bidding is you don’t know what you’re going to get. We all felt pretty comfortable with the Bristol proposal, the investment and things of that nature,” Kilgore said. “I think that’s where all of the Southwest delegation will be — that’s where all of us are right now. But this throws a wrench in the process.”

Kilgore noted the county project is not named in any legislation.

“I’m still committed to the city of Bristol’s project because they’re the ones who came in first, participated in all the JLARC studies and did all they were asked to do,” Kilgore said. “It’s a little bit late in the game for new projects.”

The JLARC report also suggests how the state might award casino licenses through a bidding process.

“A state’s gaming regulatory board, or a designated selection committee, typically creates specific selection criteria for evaluating casino proposals and issuing an award to the proposal or proposals most qualified to successfully operate a casino,” the study states. “These criteria could include, for example, a specific capital investment threshold, plans to maximize positive local impacts, or plans to prevent and treat problem gambling, among other criteria. Criteria can also be included to reflect the interests and preferences of state policymakers and host communities.

“For example, a host community may prefer the use of local assets (such as an existing building), resources (such as the local labor force), or local ownership to maximize local impact and reflect the character of the local community. The General Assembly could also stipulate that special consideration be given to awarding a license to a recognized tribal nation to own or operate a casino,” according to the study.

Bristol, Virginia, City Manager Randy Eads said he has a different understanding of the bidding process.

“Well, I think the competitive bid process through the JLARC study was in regards to each of the localities that were studied and how the state and the localities would determine what casino operator would be within their locality. I don’t think it had any inclination to have an RFP [request for proposals] process open up across the commonwealth of Virginia to determine between operators and localities where a casino might be the most feasible,” Eads said during a hastily called news conference Tuesday.

Should the state legislation fail, the Pamunkey Tribe appears poised to proceed through the federal Indian Gaming Regulatory Act — a lengthy process requiring it to reach an agreement with the state but not be governed or taxed by the state.

In making Tuesday’s announcement, Richard Sneed, chief of the Eastern Band of Cherokee Indians, mentioned his tribe’s connection to this area.

“The location of the casino will be within the beloved ancestral home of the Eastern Band of the Cherokee Indians,” he said. “That is why this project has a special place in my heart and in the heart of our people.”

With the announcement Tuesday of a second proposed casino for the Bristol-Washington County area, which project do you prefer?