Radford’s Carlik Jones (center) drives to the basket between Gardner-Webb defenders Jose Perez (left) and Brandon Miller during the first half of the 2019 Big South championship game in Radford. 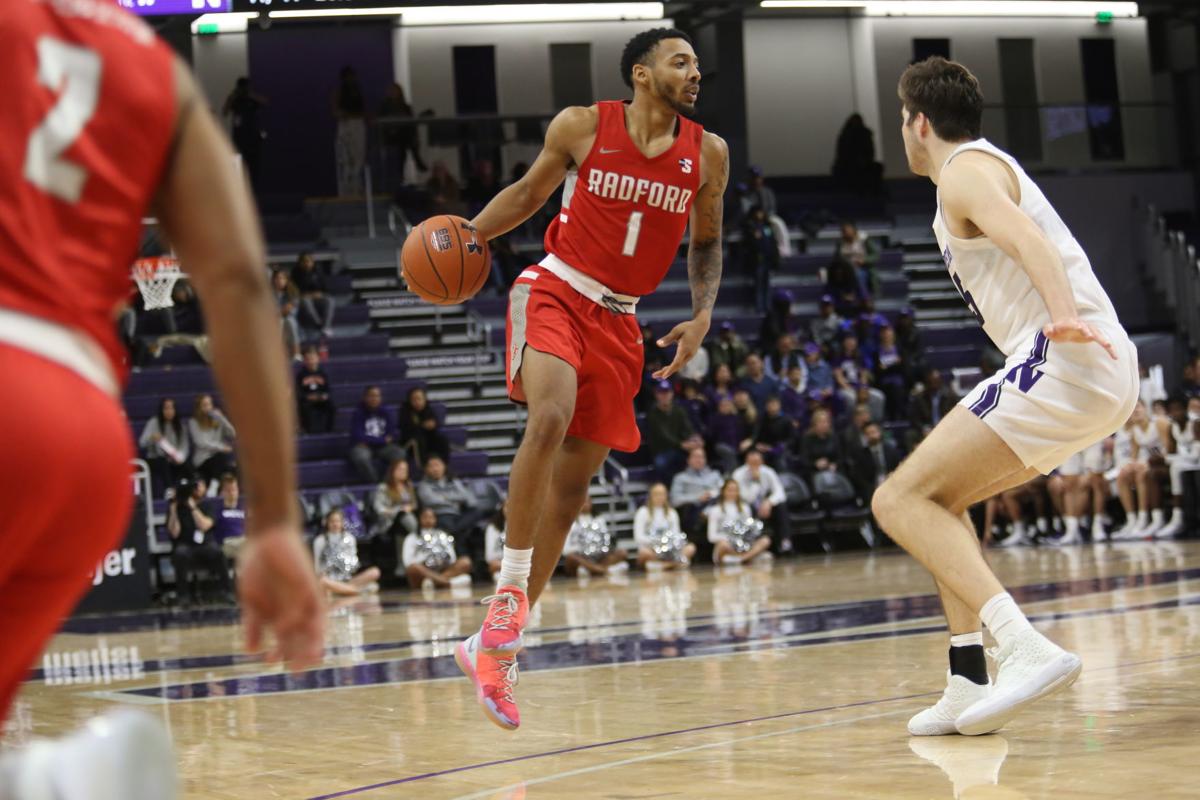 Radford guard Carlik Jones (center), shown in a game against Northwestern in November, has entered the transfer portal. Jones averaged 20 points, 5.1 rebounds and 5.5 assists this season. 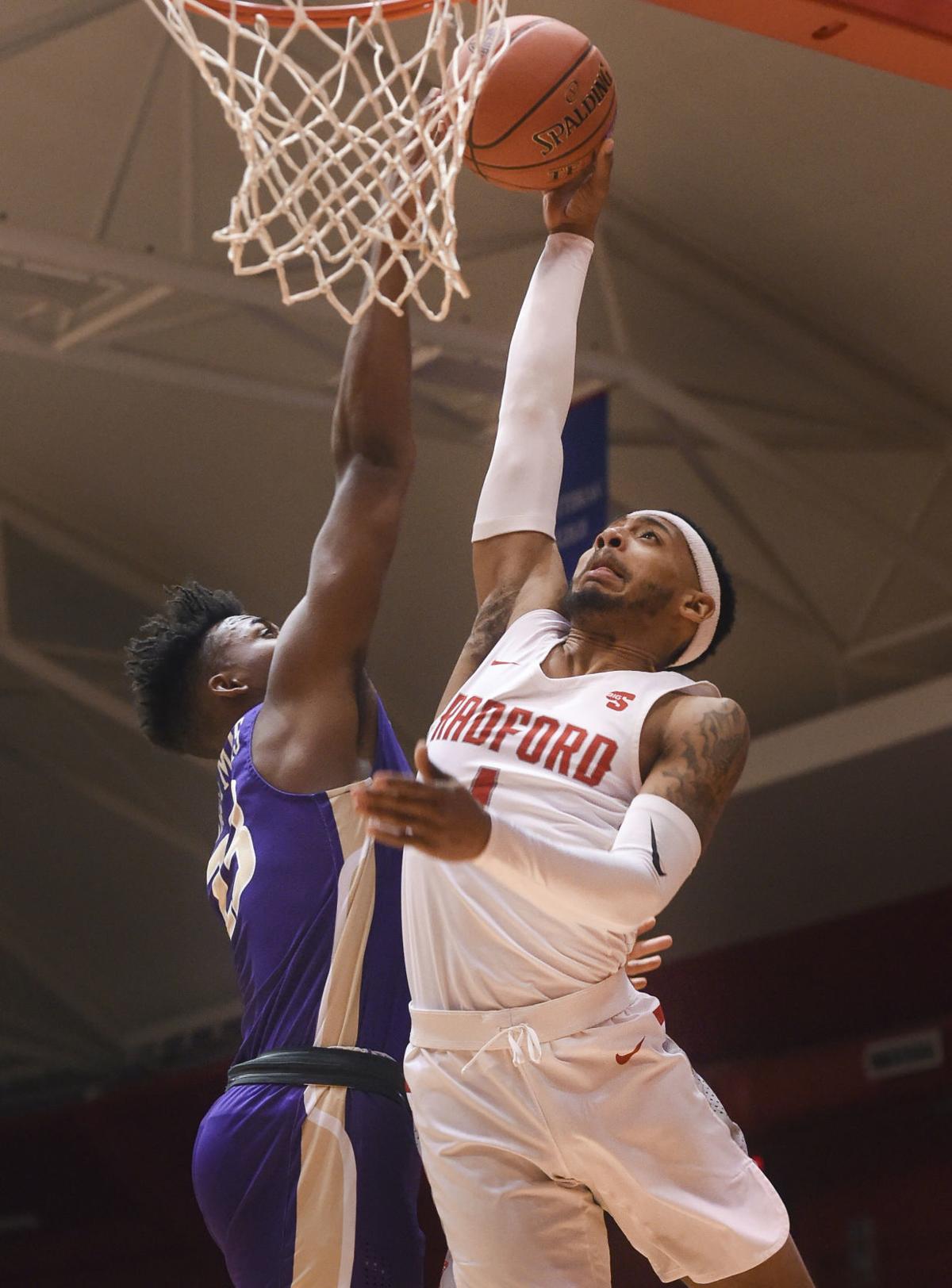 Radford guard Carlik Jones (left) shoots over Maryland forward Ricky Lindo Jr. in the first half of a 2018 game in College Park, Md.

Radford’s Carlik Jones (center) drives to the basket between Gardner-Webb defenders Jose Perez (left) and Brandon Miller during the first half of the 2019 Big South championship game in Radford.

Radford guard Carlik Jones (center), shown in a game against Northwestern in November, has entered the transfer portal. Jones averaged 20 points, 5.1 rebounds and 5.5 assists this season.

Radford guard Carlik Jones (left) shoots over Maryland forward Ricky Lindo Jr. in the first half of a 2018 game in College Park, Md.

RADFORD — The reigning Big South player of the year has hit the transfer portal.

Radford guard Carlik Jones has entered his name into the transfer portal , according to the school’s athletic director, Robert Lineburg.

That will give him the opportunity to play his final year of eligibility elsewhere as a graduate transfer, if he so chooses.

“I think he just wants to consider the options available,” Carlik’s mother, Felicia Roseman, said in a phone interview on Wednesday. “He wants to look at other opportunities that are possible; I don’t think he’s finalized anything. He certainly wants to put in and consider all options available to him in that last year of eligibility.”

Radford coach Mike Jones also confirmed the news, but declined to comment on Carlik’s decision. Jones knew losing Carlik as a graduate transfer or to the professional ranks was a realistic possibility going back to the summer.

“We’ve had conversations starting last summer about that with him, his mom and his dad,” Mike Jones said when asked about it in February. “I can’t control if that’s what they want to do, they can do it. I want what’s best for Carlik. I think me and his family, we all want the same thing — we want Carlik to be successful.”

The Highlanders (21-11, 15-3) lost in the Big South semifinals 86-78 to Hampton. As the tournament’s No. 1 seed, they earned the conference’s automatic bid to the NIT before the coronavirus outbreak ended up canceling the postseason.

Carlik Jones led the way this year, averaging 20 points with 5.1 rebounds and 5.5 assists to earn league player of the year honors. The fourth-year junior was the only player in the league to average at least 10 points, five rebounds and five assists this season.

This year also saw the Ohio native become only the second player in conference history with 1,500 career points, 450 rebounds and 450 assists.

As a redshirt freshman, he sank a 3-pointer at the buzzer to give Radford a 55-52 win over Liberty in the 2018 Big South tournament title game.

The win put the Highlanders in the NCAA Tournament for the first time in nine seasons. He was named the Big South freshman of the year that season.

He made the All-Big South first team as a third-year sophomore, when he helped Radford win a share of the Big South regular-season title.

“I think he certainly wants to be a player that can go into a program and make an immediate impact,” Roseman said. “If he’s going to be a role player or not being able to play right away, I think he’d rather stay at Radford. He’s done well at Radford and there’s no hard feelings there.”

The NCAA has put a dead period in place for recruiting through at least April 15 for all Division 1 sports — it suspended official and unofficial on-campus visits for prospective student-athletes — but coaches can still contact student-athletes through phone calls, text messages and written correspondence.

“It’s definitely going to be a challenge,” Roseman said. “With the virus going, we want to make sure he stays safe and complies with the guidelines, but I shared that’s definitely an obstacle he has to deal with.”

Jones will instantly become a top target for teams across the country given his impressive resume.

“He’s definitely heard from a lot of schools already,” Roseman said. “He’s listening to what schools, they have to say and being patient.”

Mark Berman contributed to this story.