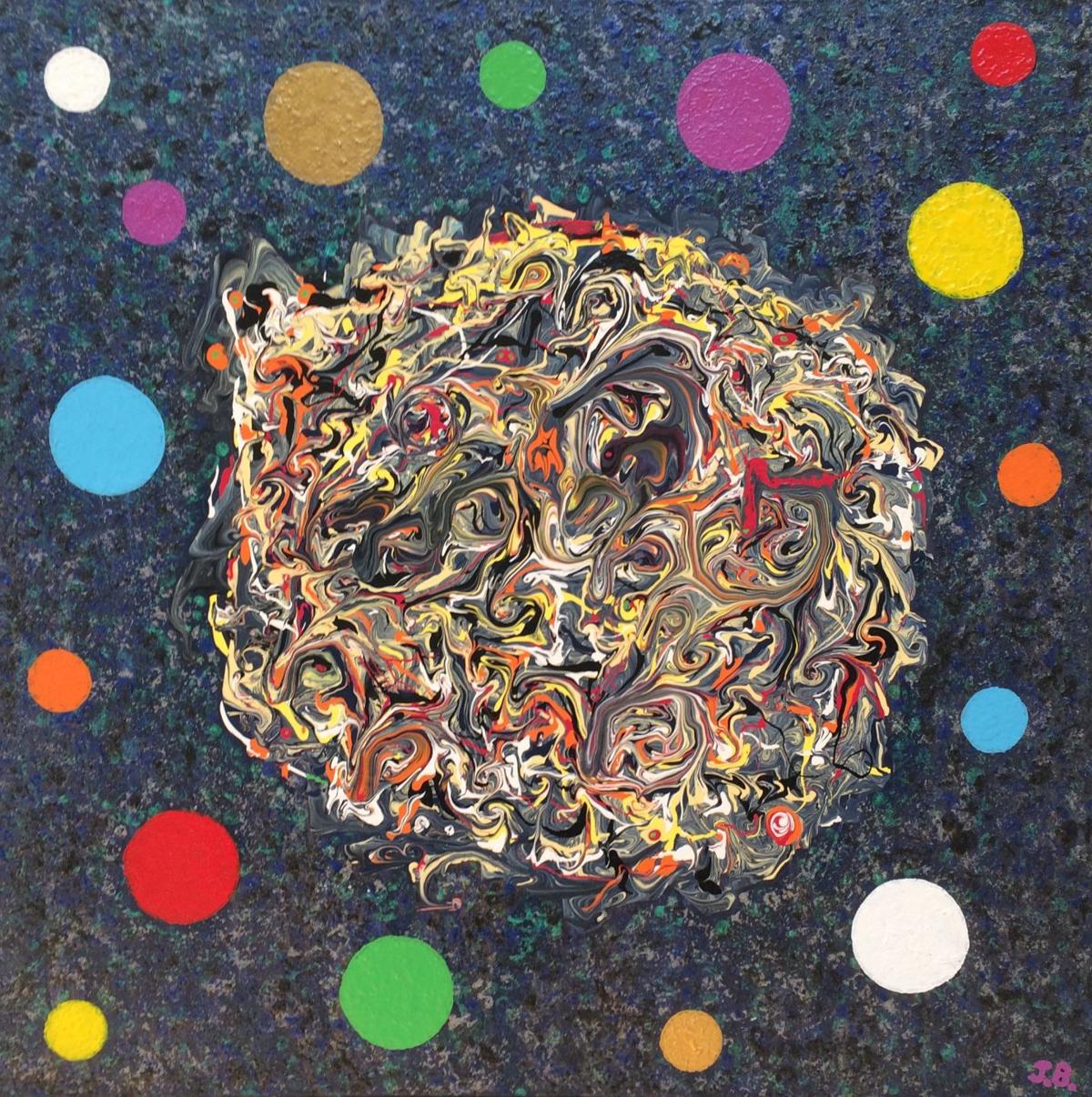 “Space Race” by Jim Burtch, one of 21 paintings in his debut solo show “Dub Consciousness” 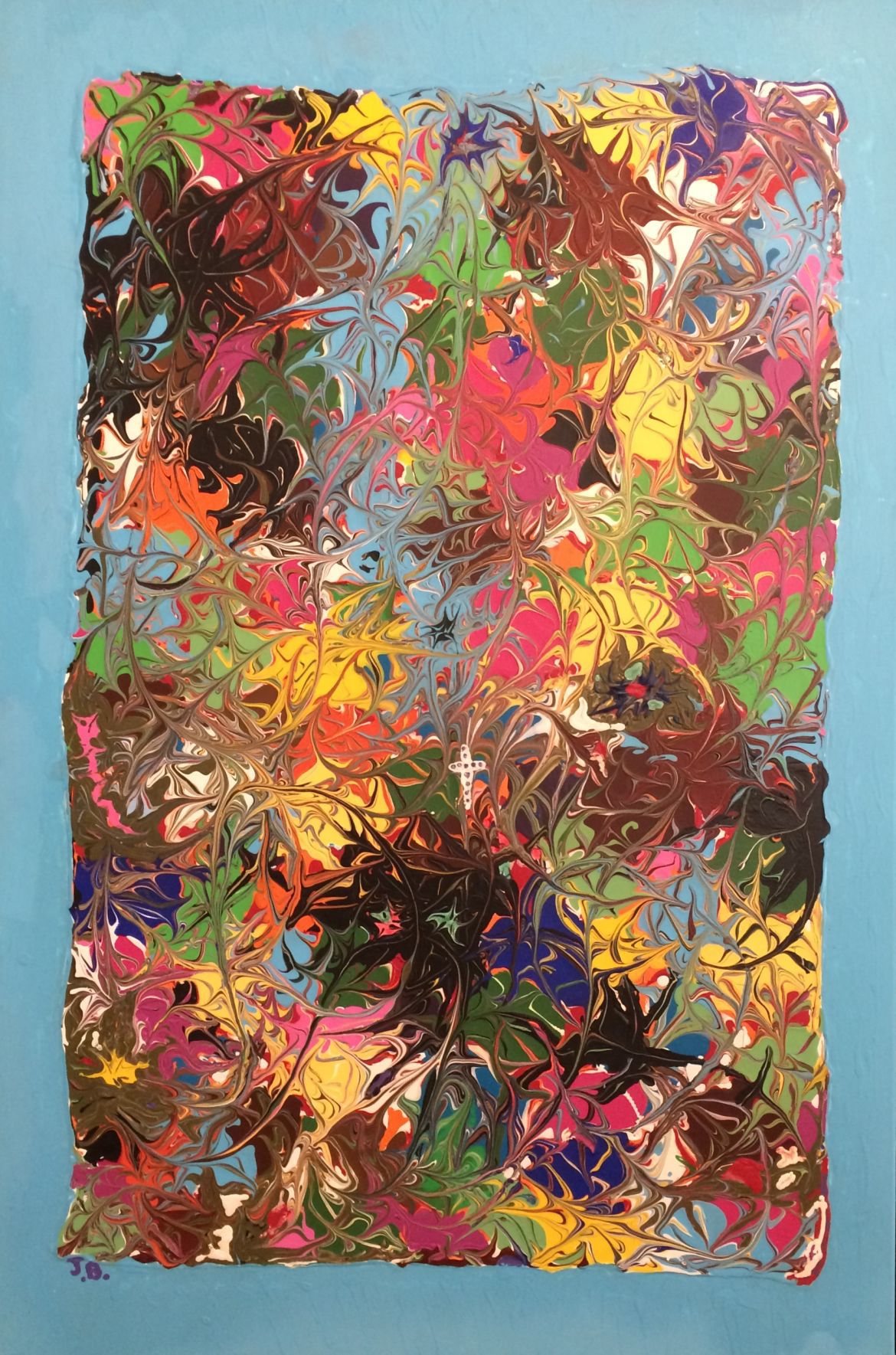 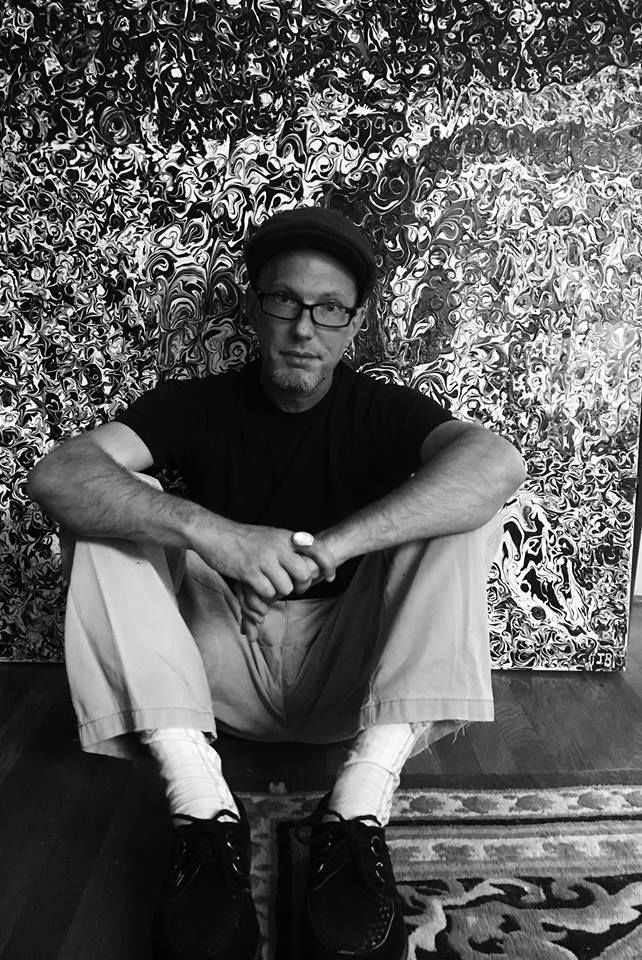 “Space Race” by Jim Burtch, one of 21 paintings in his debut solo show “Dub Consciousness”

It’s only natural that his first solo art show would center on music. Burtch, 49, puts it like this:

“I love offbeat music like rockabilly, dub reggae, the punk and new wave of my youth. And my kids got me into Gorillaz and some Twenty One Pilots. So that is crucial. Oh, and the instrumental surf sounds of the ’60s. Not a top 40 guy.”

His lively abstract acrylic paintings intend to capture the feel of the tunes constantly running through his head. The show, “Dub Consciousness,” opens Friday at Gallery 202 in downtown Roanoke with a reception that begins at 6 p.m.

Burtch isn’t a member of Gallery 202, but the artists with studios in the gallery are happy to host his show. “He’s very dedicated as an artist,” said landscape painter Margaret Sue Turner Wright. “We knew we could depend on him to put on a really good show.”

Burtch is the son of the late artist Mary Jane Burtch, an influential figure in Roanoke’s art scene. Since she died in 2016, Burtch has worked to keep his mother’s art and legacy in the public eye. However, with his Gallery 202 show, he’s stepping out on his own.

“Gallery 202 thought I was ready,” he wrote. He received a lot of encouragement from Gallery 202 members Diane Patton and C.J. Sparks Phillips, both artists who are well established in the Roanoke Valley scene. “It was on my own merit, not my late mother’s shadow,” Burtch wrote.

Even so, his mother’s dedication to art was an inspiration. She once told him, “Well, if you don’t look, you can’t see,” a phrase that’s stayed with him since. “I carry that in my pocket,” he wrote.

Burtch rarely uses paint brushes. His instruments of choice include “chopsticks, flat stones, nails, kitchen materials (no forks) and other things gathered from nature.” The colors in his paintings are bright and sharply delineated.

Gallery 202 is reached from downtown Roanoke’s Market Square via an ascent up a long flight of stairs to the top floor of the building that once housed the 202 restaurant. That top-floor space has a history of holding art studios.

Unicorns and Butterflies, a space for studios and shops, opened there in 1986. In 1991, the space changed owners to become Studios on the Square, which remained in the building for 10 years. In 2012, the space reopened under the name 202 Market Square Gallery, shortened now to Gallery 202. Phillips, Patton and landscape painter Terry Lyon have had studios in the space through all its artistic incarnations, Wright said.

The other members of 202 include painters Karen Carter and Donna Tuten, photographer Anne Sampson and clothing designer/textile artist Rosemary St. Jacques. August’s featured artist will be painter Patrick Callaway, who at 19 is the studio’s youngest member.

Burtch’s opening reception coincides with Art by Night, Roanoke’s downtown gallery tour that takes place the first Friday of each month. For more information, visit roanokeartbynight.com or Roanoke Art by Night on Facebook.