The Gainsboro area of Roanoke, pictured from Cherry Avenue Northwest, is one of the oldest neighborhoods in the city. Residents are working to maintain its future.

A building that once housed the Virginia Welding and Body Shop is knocked down by a bulldozer as demolition crews begin clearing for expansion of the Wometco Coca-Cola Bottling plant.

In 1984, construction started on a $13.5 million expansion of the Wometco Coca-Cola Bottling Co. The expansion enlarged the plant to 250,000 square feet and covered nearly six acres. 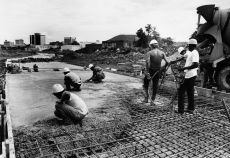 Workmen finish covering Trout Run, the creek running through the Wometco Coca-Cola Bottling site in Northwest Roanoke. They used about 700 cubic yards of concrete to cover the waterway. 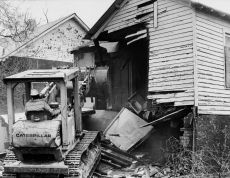 A bulldozer rams through a house at Fourth Street and Wells Avenue Northwest for the Wometco project. 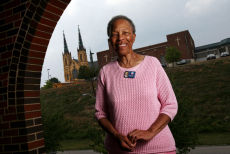 The Gainsboro area of Roanoke, pictured from Cherry Avenue Northwest, is one of the oldest neighborhoods in the city. Residents are working to maintain its future.

A building that once housed the Virginia Welding and Body Shop is knocked down by a bulldozer as demolition crews begin clearing for expansion of the Wometco Coca-Cola Bottling plant.

In 1984, construction started on a $13.5 million expansion of the Wometco Coca-Cola Bottling Co. The expansion enlarged the plant to 250,000 square feet and covered nearly six acres.

Workmen finish covering Trout Run, the creek running through the Wometco Coca-Cola Bottling site in Northwest Roanoke. They used about 700 cubic yards of concrete to cover the waterway.

A bulldozer rams through a house at Fourth Street and Wells Avenue Northwest for the Wometco project.

Urban renewal wiped blocks of Roanoke's black neighborhoods from the map and divided Gainsboro -- one of the city's oldest sections -- into a fractured patchwork of houses, industrial lots and splintered community groups.

So while a proposal this month to end one of the last remaining relics of urban renewal has offered Gainsboro residents a chance for closure, it also has exposed frayed social ties.

A predominant issue remains: What do Gainsboro stakeholders really want, and can they ever set their differences aside to accomplish anything together?

When the city housing authority proposed closing the Gainsboro Neighborhood Development Program, which allowed it to take land for economic development, residents responded with a mixture of confusion, anger and worry that the agency might abandon the neighborhood.

Roanoke Redevelopment and Housing Authority officials said that closing the program would remove only the agency's authority to condemn and clear property. Meanwhile, the city's establishment of a rehabilitation district would replace benefits that could be lost by allowing financing for housing improvements and some zoning controls over what's built in the neighborhood.

But although closing the development program would seem to change little on a practical level, it represents the end of an important, 53-year chapter in the city's history that reshaped the Northeast and Gainsboro neighborhoods.

Mindy Fullilove, a Columbia University professor of psychiatry and public health who wrote "Root Shock," a 2004 book that examined the effects of urban renewal in Roanoke and other cities, sees an opportunity for the neighborhood to once and for all close the door on urban renewal.

It's also a chance for residents to play a role in determining their community's future, she said.

"This is one of those moments where you decide the next 50 years of the city," she said.

The legacy of distrust between the neighborhood and city government could make that difficult. In 1979, when the city council was considering a similar proposal, the Rev. Kenneth Wright of Gainsboro's First Baptist Church said, "It is imperative that the city not overlook the moral commitment that has been made to the people of Gainsboro."

That remark has been echoed by a number of neighborhood residents today.

"The feelings people are expressing about this have built over activities for 30-some years," housing authority Executive Director Glenda Edwards said.

"But it's incumbent upon us ... to try and restore that trust going forward."

Gainsboro -- which by the housing authority's definition stretches from Fifth Street east to Interstate 581 and from Orange Avenue south to Shenandoah Avenue -- predates Roanoke. It thrived about the turn of the century, and residents such as civil rights lawyer Oliver Hill and ground-breaking U.S. Ambassador Edward Dudley grew up there. But by the late '40s, the neighborhood began to decline as businesses in the black commercial district began to close.

Urban renewal continued to chip away piece by piece over decades.

"There's enough blame to spread around from the housing authority and some of the neighborhood groups," said Del. Onzlee Ware, D-Roanoke, who maintains an office in the neighborhood. "Everybody needs to be on the same page and have a vision for what Gainsboro is going to be 15 to 20 years from now. It's not fair for us to blame urban renewal. We played a part in it."

Several who experienced urban renewal first-hand -- including longtime Gainsboro residents Alice and Margaret Roberts, Wright and Claudia Whitworth of the Roanoke Tribune -- were contacted for this story but declined to comment.

Urban renewal helped launch projects such as an expanded Coca-Cola bottling plant, the conference center at the Hotel Roanoke, the Roanoke Higher Education Center, Eight Jefferson Place and the Dumas Center for Artistic & Cultural Development -- but it also moved many Gainsboro residents from their homes and left many properties vacant.

"The whole goal was to move low-income people out of these neighborhoods that surrounded the downtown, sell the property to commercial developers, so the city wins, the developers win. ... The only people who lose are those in the neighborhood, who still remain there," said Radford University professor Reginald Shareef. "The anger is, for those who remain, their quality of life in the neighborhood has gone."

About 1,000 people live in Gainsboro, scattered across roughly 500 residential properties, nearly half of which are currently vacant, according to city real estate records. The housing authority owns about 85 of those vacant residential lots, most of which are concentrated on the neighborhood's north side.

Edwards said that even if the redevelopment program is terminated, the agency is still mandated to do something with those properties.

The housing authority has delayed closing the redevelopment program while it continues to work with neighborhood residents. But with no need to acquire more land, the program's days appear numbered.

Melinda Payne, a Gainsboro property owner, former resident and a board member of the Roanoke Neighborhood Development Corp., said Gainsboro residents have to unite.

"Those of us who own property and those who still live there need to come together and resolve what still needs to be accomplished and make sure there's a consensus," Payne said.

That may be easier said than done. The neighborhood is home to three different neighborhood associations, each with different personalities involved.

Evelyn Bethel and Historic Gainsboro Preservation are perhaps the most visible; Bethel is a regular speaker at city council meetings. She said that having three groups is an advantage, not a hindrance. But Bethel blamed city government for trying to divide and conquer.

"They try to pit one neighborhood group against the other," Bethel said. "That's what the problem is, not that we have three groups but the insidious notion circulating around the city that they don't work together."

As in every neighborhood, there are some personal disagreements. But there seems to be at least some consensus on what Gainsboro needs.

"They want improvements," said Constance Crutchfield, the acting chairwoman for Gainsboro Southwest Community Organization. "They want street maintenance and things done in a timely fashion. They want for Northwest what the other parts of the city have."

And most people seem to agree the neighborhood is in need of more amenities such as grocery and convenience stores, barber shops and other small businesses.

"You need more than houses to revitalize an area," Bethel said. "Look at how many businesses were destroyed, how many homes, how many churches, schools. You cannot revitalize a community without those amenities."

But there's disagreement on how to attract those things. Lee Wolfe, a 21-year resident who is president of the Gainsboro Neighborhood Alliance, said it's incumbent on the city to enforce building codes and on residents to keep their properties clean and attractive.

Others argue that Bethel helped prevent a move that could have helped bring those kind of amenities back when she opposed a proposed Social Security Administration building, saying it didn't blend with Henry Street.

K.C. Bratton, who spent much of his adolescence in Gainsboro, was on the board of the Roanoke Neighborhood Development Corp., which shepherded the proposal. He's since resigned.

The Social Security building could have helped the Henry Street area build a "critical mass" that's necessary to attract investors, he said.

"You had a small group of people in the community raising opposition that it really deterred the developer," Bratton said. The project was moved to a site on South Jefferson Street downtown instead.

Bratton believes Gainsboro's revitalization ultimately must be spurred by the private sector.

"The lion's share of the impetus has to come from the person who's going to operate the business or own the building," he said.

But others say the city and housing authority's actions over the past several decades have destroyed investor confidence.

Fullilove said the declaration of Gainsboro as an urban renewal zone "meant that people stopped investing. All neighborhoods require investment, so they kind of cut off the supply."

Richard Chubb at one time owned a business on Henry Street.

"They've taken so much that it's hard to say who can put that money back in," Chubb said. "There's been several opportunities, but people have rejected it so long. If you string somebody out long enough, they're going to self-destruct."

Gainsboro property owner Walter Claytor set a precedent for that in 2001, when he filed a lawsuit alleging the housing authority's development program devalued his family's land and drove away their tenants with a 20-year threat to seize the land that was never consummated. He won more than $281,000 plus $70,000 in interest.

Shareef, who testified as an expert witness in the Claytor case, said that compensation could salvage the housing authority's image in the neighborhood.

"For that generation of people in Gainsboro, who've been lied to and exploited, I don't think those people will ever have faith in the housing authority and city manager's office. But if they receive compensation, it changes the dynamic for the next generation," he said.

Ware puts the impetus on the people who work, live and own property there now.

"If you really want to be honest about it, African-American people own the remaining part of what was Gainsboro," Ware said.

"My challenge to people is, let's get together and build something. There's still opportunities left to develop and determine how our community looks. It's always great to say what happened because a person who doesn't know the past won't know the future or where they're going. But you can't live in it."