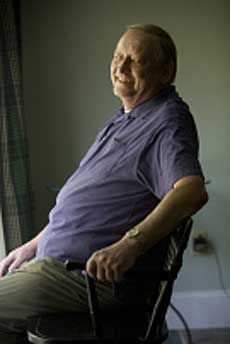 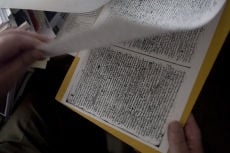 Jim Glanville flips through a copy of a 425-year-old Spanish document that detailed a savage attack on an Indian village near present-day Saltville.

Jim Glanville flips through a copy of a 425-year-old Spanish document that detailed a savage attack on an Indian village near present-day Saltville.

Jim Glanville was about to change history -- literally.

He stood before a group of historians and scholars at the Library of Virginia in Richmond, armed with a speech he believed would rile them into a fury. He let fly with his opening line:

"The conventional wisdom that recorded Virginia history began at or near Jamestown is wrong."

Take that, Capt. John Smith. You too, Pocahontas.

Spanish explorers became the first Europeans to wander into what would become Virginia in 1540, as they arrived from the south in search of gold in the mountains.

An American Indian woman from Southwest Virginia married a Spaniard long before Pocahontas was born.

And, most dramatically, on a spring day in 1567, a group of 15 saber-wielding conquistadors slaughtered hundreds of Indians at present-day Saltville, some 40 years before the English landed at Jamestown.

Glanville waited for the furor to erupt after his presentation. But controversy never arose. The scholars listened to his findings, which he backed with reams of ancient documentation and recent archaeological evidence, and they just sort of sat there.

"I think they were bemused," Glanville said.

That was five years ago, about the same time his findings were first published in a Blacksburg-based historical journal.

For a while, he wondered if his work was being ignored by the historical academic establishment. Perhaps his assertions that the Spanish set foot in Virginia before the English interfered too forcibly with the commonwealth's accepted historical narrative. But in the past couple of years, many of Virginia's most notable historians have come to regard Glanville's research as valid and significant.

"He's onto something," said Peter Wallenstein, a Virginia Tech history professor who has used Glanville's findings in his own book about Virginia history. "He's telling an important Virginia story."

And in the process, Glanville just might change Southwest Virginia's place in history. Not bad for a retired chemistry professor who just happens to be from England.

Glanville, 68, a prize-winning former chemistry professor at Virginia Tech, was fascinated by Saltville, the Washington County town founded upon huge salt deposits that supported various industries for more than a century. One of those industries was soda ash -- also called sodium carbonate -- which was used in glass and textile manufacturing.

But when he pitched the idea of writing about the history of soda ash to the Blacksburg history publication The Smithfield Review in 2003, editor Hugh Campbell was less than enthusiastic.

"Don't you have something to write about that's a little older?" Campbell asked.

"Well, I saw on the Internet about the Spanish in Saltville in the 16th century," Glanville told Campbell.

Bingo. Campbell ordered him to get cracking.

Within two months, Glanville researched, wrote and submitted an article with 134 reference notes. That article -- "Conquistadors at Saltville in 1567? A Review of the Archaeological and Documentary Evidence" -- appeared in The Smithfield Review in March 2004.

Relying on the Internet as a primary research tool, Glanville discovered translations of 16th- and 17th-century Spanish documents that detailed expeditions across the Carolinas and into the Tennessee Valley.

He compared those documents to major archaeological findings unearthed in North Carolina since the 1980s, which allowed him to establish the presence of Spanish explorers in Southwest Virginia in the middle 1500s. He was even able to pinpoint Saltville as the likely location of the murderous raid by conquistadors on an Indian village called Maniatique.

Much of the evidence was readily available. Glanville credits Lawrence Richardson, a Smyth County farmer and amateur historian, with coming to similar conclusions a decade ago about Spanish forays into Virginia. He also relied heavily upon the archaeological findings of Robin Beck and David Moore, two archaeologists who have done considerable work in western North Carolina.

But no one had put the pieces of the puzzle together to establish a Virginia connection the way Glanville did.

"This was a story that was not well-known, maybe not even known," said Campbell, editor of The Smithfield Review.

"It was a detective story and he really got into it. He followed the leads wherever they led. To my knowledge, what he found was solid."

Born in London, Glanville has lived in the United States since 1962, including 17 years in Roanoke. He became an American citizen on July 4, 1972, and has lived in Blacksburg since 1986. Friendly and conversational, Glanville shuns credit and acclaim for his findings. He said he wants the focus to be on raising awareness about Southwest Virginia's history.

If conquistadors had murdered hundreds of Indians at Jamestown -- or anywhere else in Eastern or Northern Virginia -- there'd at least be a historical marker at the site of the bloodshed. No such marker exists in Saltville, although Glanville has designed one.

The first Europeans in Virginia

Here's an attempt to boil down the Spanish exploration of the Southeast into a few paragraphs.

In the generation after Christopher Columbus' voyage in 1492, the Spanish conquered Mexico and Peru.

In 1539, Hernando de Soto began his exploration of "La Florida," which covered most of the southeastern United States. De Soto's expedition wound into the Appalachian Mountains, where in 1540 two of his men -- Juan de Villalobos and Francisco de Silvera -- trekked northward in search of gold, silver and brass.

Glanville's thorough reading of translated expedition documents led him to place the Spaniards in present-day Lee County, which makes them "almost certainly the first Europeans to set foot" in Virginia, he wrote.

A quarter-century later, the conquistadors were back in Southwest Virginia. The Spanish had established a colony called Santa Elena at Parris Island, S.C., which is today home to the U.S. Marine Corps Recruit Depot. In late 1566, Capt. Juan Pardo left Santa Elena on an expedition across the Carolinas into the mountains, where he reached the Indian town of Joara and established Fort San Juan.

Pardo was called back to Santa Elena, and he left behind a group of soldiers at Fort San Juan. One of those was Sgt. Hernando Moyano, who would instigate a bloody day in Southwest Virginia's history.

The day of the massacre

People lived in Southwest Virginia long before conquistadors or European immigrants penetrated the frontier. American Indians of the late Woodland period (from about 800 A.D. to 1650 A.D.) lived and hunted in a community called Maniatique because of the abundant game drawn by the salt marshes. These people established a thriving salt trade, as well.

Several archaeologists, including Beck, who excavated the Fort San Juan site and now teaches at the University of Oklahoma, have placed Maniatique at Saltville (or perhaps eight miles south at Chilhowie).

According to translated Spanish documents obtained by Glanville, a "mountain chief" of a native people called Chiscas sent threats to the Spanish party at Fort San Juan. The chief said "that he would come and eat them and a dog that the sergeant had." Sgt. Moyano did not wait around to become some chief's dinner.

Moyano and 15 to 20 soldiers traveled four days into the mountains and found the Chiscas in a well-fortified village. Moyano attacked the village, most likely using swords against the Chiscas' wood and stone weapons. The Spanish were also known to use dogs in battle. The attack was a slaughter.

Moyano later wrote to Pardo claiming to have killed 1,000 Indians and to have burned 50 huts. Just two conquistadors were wounded.

Glanville calls Moyano's casualty figures to be "classic Spanish exaggeration," perhaps made to impress his superiors. Glanville suspects perhaps 200 Indians died, certainly not an insignificant number. The battle would be the first recorded in Virginia.

Glanville believes that Maniatique -- i.e. the Saltville-Chilhowie region -- was where the attack occurred. He admits that the evidence is minimal, but persuasive. The last piece of the puzzle is the testimony given some 30 years after the attack by a Chisca woman who said that Maniatique was "where ... Moyano entered."

That woman married a Spaniard and took the name Luisa Melendez, which Glanville said makes her one of the first, if not the very first, native-born Virginians whose name we know. She was probably already married by the time the better-known Pocahontas was born in 1595.

Five years after publishing his research, Glanville said that no one has come forward to refute any of his claims. In fact, his work is now widely accepted by many Virginia scholars and historians.

Even the Library of Virginia, where Glanville failed to raise the hackles of historians, cites his work. On its "Virginia Memory" Web site, the library lists in its Virginia chronology:

1567: A Spanish party attacked a Holstonia town at the site of Saltville.

"Jim is doing something that needs to be done," said Brent Tarter, the library's director of education and outreach. He said the historical community might have reacted slowly to Glanville's findings because "history is a process. When you have a revised interpretation of the past, it takes time for people to digest and rethink what they think they know."

Glanville will be telling that story again on Tuesday, when he gives a talk to the Roanoke Valley Historical Society at Christ Lutheran Church.

"I think this is a story worth telling," he said. "I'm trying to get the story out. People need to know what happened here. Southwest Virginia has a rich history that's as compelling as anything that happened east of here. It's a heck of a story."

To view some of Jim Glanville's work, go online to www.holstonia.net. For information about The Smithfield Review go to www.smithfieldplantation.org/review.html