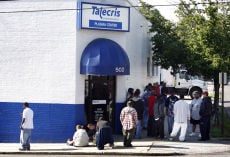 Talecris officials point out that plasma-selling has humanitarian benefits: Plasma is ultimately made into life-saving medical products. 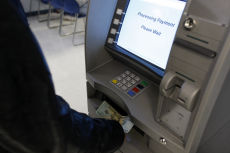 A plasma donor gets paid from an ATM at the Talecris center.

Talecris officials point out that plasma-selling has humanitarian benefits: Plasma is ultimately made into life-saving medical products.

A plasma donor gets paid from an ATM at the Talecris center.

Bobby Huddleston sold plasma last week so he could afford to take his prom date to dinner. William Morris did it for gas money -- and because the health screenings at Talecris Plasma Center tell him how high his blood pressure is.

How bad is this recession? According to the people who stand in the ever-growing line outside the Fifth Street Southwest plasma center, times are rough.

Talecris officials won't divulge donor numbers or confirm an increase. But according to several donors interviewed recently -- and passers-by who have observed a growing number of them standing in line, waiting for the doors to open -- the plasma business is booming.

"My parents don't really like it, but it's not them coming down here, it's me," said Huddleston, a 21-year-old Army reservist who said he was fired recently from his restaurant job and has been unable to find another. "This keeps money in my pocket."

Plasma donation at Talecris pays $20 for the first hourlong session and $40 if the donor returns to give plasma within the next seven days. If it's your first time donating, the rate is $35 and $50, respectively, for the first and second times.

With 60 centers across the country, Talecris officials like to point out the humanitarian benefits of plasma-selling: The plasma is tested, according to U.S. Food and Drug Administration rules, then frozen and trucked to North Carolina to be made into a host of life-saving medical products -- intravenous treatments for hemophilia, primary immune deficiencies and genetic emphysema, for instance.

"We've seen a change in clientele ... toward more of a working-class group that's looking for ways to supplement their income, especially when gas prices went up," center manager Keith Martin said.

Morris, 62, works as a part-time lumber associate at Home Depot and said he started selling plasma four years ago, ever since he found out he had high blood pressure. Daily screening procedures include testing for blood pressure, iron content, pulse rate and general health; sick people may not donate.

Once donors pass the mini-exam, they go into a large room and lie on recliners and watch movies while rubber-gloved phlebotomists wearing see-through face shields draw their plasma. The process generally takes about 90 minutes, including the screening and the wait.

"Years ago you got paid up to $55 to donate, but the rate went down last year," Morris said. "It's like gasoline -- all supply and demand."

Men seemed to outnumber women at the center by about 3-to-1. Several of those interviewed said they were between jobs, living with girlfriends and hoping to pick up some cash to tide them over until they found work again.

Roger Moore, 34, said he begins his day at 5 a.m. by standing in line at a day-labor temp agency on Williamson Road. "But jobs are so scarce now, it's hard to find anything." He used to work in pizza delivery for Domino's but lost his job after his van broke down and he couldn't afford to repair it.

Steady donors can earn as much as $240 a month, said William McLean, 40, who was laid off from Elizabeth Arden not long ago. "That's half the rent in some places."

The popularity of Talecris has not had an effect on blood donations to the Roanoke Valley chapter of the American Red Cross, where donors are not paid, and the donated blood stays local -- an effort to meet the average daily need of 300 blood donations in the region.

"Our collections are up for the first time in four years," communications manager Bob Lutjen said. By the end of June, the chapter expects to have collected 72,000 units in its 46-county service area.

But financial contributions to the Red Cross are down by 15 percent, and workplace blood donations have decreased 7 percent, an aftereffect of plant closings, downsizing and company belt-tightening, Lutjen added. He believes people who can't afford to donate money to their favorite causes are supporting the Red Cross by giving blood.

"People still have a desire to become involved and do something of value," he said.

On Tuesday at Talecris, novice plasma donor Julie Ferris stood in line to sign up for a short physical, a requirement for all first-timers. The Jefferson College of Health Sciences student said she was donating for financial, educational and medical reasons. "It's a little bit of practice for me, watching what they do," she said.

Because she doesn't have health insurance, the single mom said she was equally happy about receiving a physical. And the cash will help her reimburse her roommate for the gas she burned driving to Talecris in their shared car.

"My roommate tried one time, but she couldn't do it," Ferris said. "She doesn't like needles."